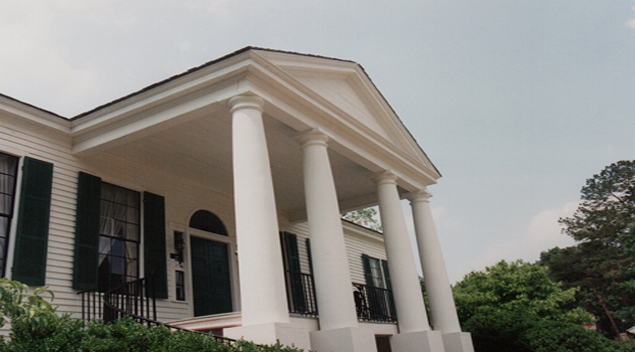 Getting ready to plan a fabulous summer vacation destination? If you haven't yet explored the Southern region, this might the year. Featuring many of America's oldest cities, superb food, refined beauty and world famous attractions, the South has something to offer for all walks of life. In fact, not only is the South home to many historic firsts, it's also home to the most visited amusement park, the birthplace of modern American music and one city regarded as "America's Best." Defining grace, elegance and classic Southern hospitality, here are some of the best sights to behold in America's Southern Region.

Established in 1837, Atlanta literally did rise from the ashes after the Civil War to become a major international destination for world-class arts and theater, professional sports and popular attractions for all ages. Among the most popular attractions are the Martin Luther King Jr. National Historic Site, the final resting place of the late Civil Rights leader, the CNN Center, the home of Margaret Mitchell (author of "Gone with the Wind"), the Jimmy Carter Library and Museum, Centennial Olympic Park and Stone Mountain Theme Park - Georgia's top tourist attraction 20 miles east of Atlanta. One of just three American cities to host the Summer Olympics, Atlanta is also home to the Atlanta Braves, Atlanta Falcons and Atlanta Hawks. The city with more than 70 streets named "Peachtree" has a wide variety of dining options with Southern-style home cooking at places like Mary Mac's Tea Room, Colonnade and Pitty Pat's Porch and upscale dining at Bacchanalia or the revolving Sundial Restaurant with panoramic views of the city skyline.

One of the nation's oldest cities, Charleston is acclaimed for its friendly people, historic buildings and excellent dining. Located along the Atlantic Coast, Charleston is heralded as America's Best City, based upon reader polls from Travel + Leisure and Condé Nast Traveler. A handful of architectural styles grace the streets of Charleston, including fabulous examples of Greek Revival, Queen Anne and Neoclassical, and of special interest, the 13 colorful homes along the Rainbow Row on East Bay Street. Other top attractions for first-time visitors include the Boone Hall Plantation, Charleston's Museum Mile, Charleston Harbor and Fort Sumter, where the first shots of the Civil War were fired in 1861. Historic Charleston also consistently ranks among the nation's best destinations for dining, from low-cost fare to fine dining. The Charleston Grill, Halls Chophouse, McGrady's and Peninsula Grill are among the best for upscale dining, while Hominy Grill, The Glass Onion, Dave's Carry Out and Martha Lou's Kitchen are all local favorites for more affordable food.

Known for great food, music and iconic attractions, Memphis is easily one of the best destinations to visit in the South. One of the most important cities in the evolution of American music, Memphis is the birthplace of several prominent entertainers, in addition to being the home to Graceland Mansion, Sun Studio and the National Civil Rights Museum. While Graceland, the former residence of Elvis Presley, is the most famous and visited attraction, Sun Studio, where Presley made his first recordings, is credited as the "Birthplace of Rock n' Roll." But equally as important is the National Civil Rights Museum at the Lorraine Hotel, where Dr. Martin Luther King Jr. was assassinated in 1968, now recognized as a symbolic center of the Civil Rights movement. Like any Southern destination, Memphis loves its food and among the best restaurants to visit are the Arcade Restaurant, the oldest in the city and a popular hangout for Elvis Presley, Chez Phillipe at the must-see Peabody Hotel and Coletta's Restaurant, another Elvis favorite for outstanding Italian food.

The City of New Orleans is arguably the most popular destination in the South and certainly among the country's best. World renown for Mardi Gras, Bourbon Street, Louisiana-style cooking and the birthplace of Jazz, there's something going on in the Crescent City most anytime of the year. Although the city's top two events – Mardi Gras and the New Orleans Jazz and Heritage Festival – have already passed, other great festivals will be held this summer, such as the Cajun Zydeco Festival, Bastille Day and the Essence Festival. New Orleans has so much more to offer beyond parties and festivals though, such as historic walking tours, the National WWII Museum, the Antebellum-period southern mansions in the Garden District, a visit to the famous cemeteries or a riverboat ride on the Mississippi River. Other attractions to take in include a visit to Preservation Hall on Bourbon Street, Carousel Bar at the Hotel Monteleone and at least one visit to Café du Monde and Jackson Square in the French Quarter. With so many choices for dining, it's difficult to list all of the most celebrated restaurants. However, The Times-Picayune's most recent Top 10 included Clancy's, Commander's Palace, Domenica, Herbsaint and Le Petite Grocery. Whatever the choice, visitors should sample Creole or Cajun cuisine at least once, with a range of options in the French Quarter. More affordable dining recommendations include Johnny's Po-Boys, Central Grocery and Napoleon House, all in the French Quarter, and Cochon Butcher in the Warehouse District.

Consistently recognized as one of America's most beautiful cities, Savannah is known for its historic architecture, charming residents and natural beauty. The must-see attraction in Georgia's oldest city is the Historic District, featuring elegant mansions, cobblestone streets and 22 finely manicured city squares, filled with moss-laden magnolia and weeping willow trees. Among the most acclaimed homes in Historic District are the English Regency-styled Owen Thomas House, Mercer-Williams Museum (the inspiration for Savannah's most famous novel, John Berendt's "Midnight in the Garden of Good and Evil") and the Juliette Gordon Low Birthplace, the founder of the Girl Scouts of the U.S.A. Other attractions include the Cathedral of St. John the Baptist, the First African Baptist Church, the Congregation Mickve Israel (third oldest synagogue in the U.S.) and Bonaventure Cemetery, also featured in Berendt's record-breaking bestseller. Savannah is also well known for its restaurants and among the best are Olde Pink House Restaurant, Joe's Homemade Café and Mrs. Wilkes Dining Room, where Southern homestyle cooking is served at communal tables. Lastly, ice cream lovers should not miss Leopold's, once recognized as the fifth best ice cream shop in the world.