MENLO PARK (CBS SF) -- A construction crew, working on a new Stanford University housing project, sheared off a fire hydrant Saturday afternoon, releasing a torrent of water that flooded the construction site and forced guests from their rooms at the Stanford Park Hotel.

Menlo Park fire officials said they responded to an alarm at the Stanford Park Hotel around 9:56 a.m. Arriving crews were greeted by guests, who had been evacuated from the hotel. 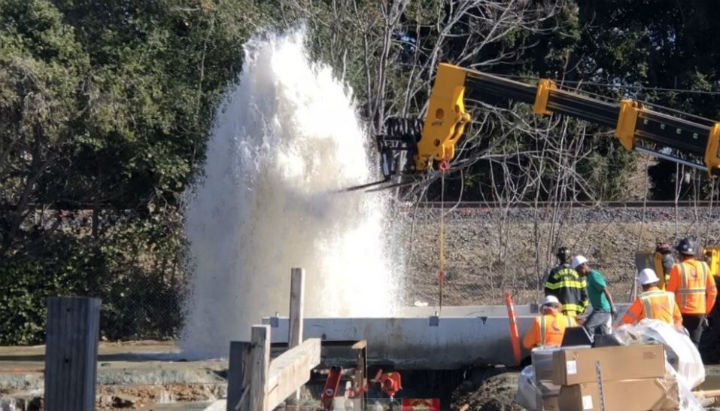 But instead of a fire, crews discovered a waterfall cascading into the construction project located next to the hotel.

Acting Battalion Chief John Wurdinger said construction workers had struck a fire hydrant with a forklift, partially shearing it off. Water was gusting out at an estimated rate of 4,500 gallons per minute.

The waterfall effect flowing water into the three-story deep sub-surface parking garage under construction "filled it up like a large bath tub," a fire department spokesman said.

Before the hydrant could be shut off, significant damage had been done to the construction site.

"Now that it's been saturated and in some areas washed out, especially around the retaining wall, is of concern," said Menlo Park Fire Chief Harold Schapelhouman. "It will need to be evaluated for everyone's safety. In the meantime, construction at the site will be shut-down until the area is pumped out, the damaged area is inspected."