Richmond, California played a huge role in World War II. The four shipyards in East bay city produced 747 ships for the war at a rate and cost never matched by other shipyards in the U.S., eventually landing the city national recognition. Today, the shipyards are a historic park and museum, complete with a Rosie the Riveter memorial on site.

Next month, Richmond looks to continue the legacy of its role in the war, honoring all the Rosie the Riveters who lent a hand to the production efforts.

On August 15, the city invites Rosies from all over in an attempt to break the Guinness World Record for "Most Rosie the Riveters in One Place." Richmond hopes to shatter the current record, set by 776 lookalikes in Ypsilanti, Michigan last year.

Rosie the Riveter has long inspired feminist movements, causing women (like Beyonce above) to dress as the iconic figure over generations.

Rosies who would like to be included in the official count should plan to dress accordingly, per the official event page:

1. Red bandana with approximately 1" diameter white polka-dots (hair should be pinned up, not down or in a ponytail).

3. Red socks that cover calves (pants must be rolled up to reveal socks)

4. Black work boots or work shoes (or as close as you can get, as long as they're black) OR brown work boots.

NOTE:
-no faded denim jeans
-no denim shirts
-no bib overalls
-no t shirts
-no sweats 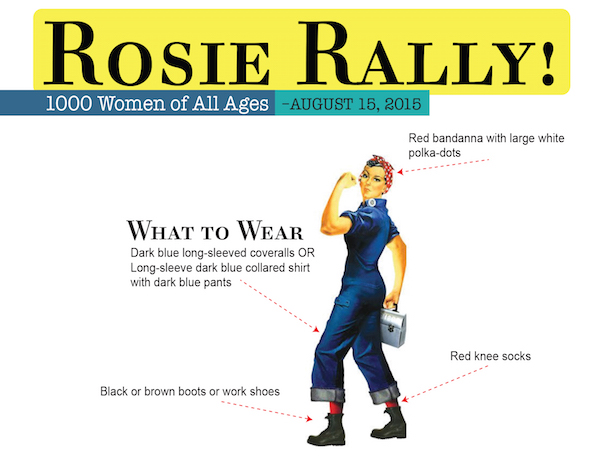 Alyssa Pereira is a music writer, web producer, and pop culture blogger for CBS stations in the San Francisco Bay Area.
Find her on Twitter at Alyssa Pereira