SAN FRANCISCO (CBS SF) -- Two Chicago-area residents were among the victims of a horrific wrong-way collision involving a taxi and a drunk driver on northbound Highway 101 early Thursday morning, according to the California Highway Patrol.

The CHP identified the four victims of the crash as a 34-year-old woman from Hillsborough, a 43-year-old male taxi cab driver from San Carlos and two Chicago-area tourists who were on their way into the city from the San Francisco International Airport -- a 57-year-old female from Chicago and a 62-year-old male from Berington, Illinois.

Thursday afternoon, the medical examiner identified the three people in the taxi as 42-year-old San Mateo resident Berkant Ahmed, who was driving, and passengers 57-year-old Mary Miller of Chicago and 62-year-old Judson Bergman of Barrington, Illinois. 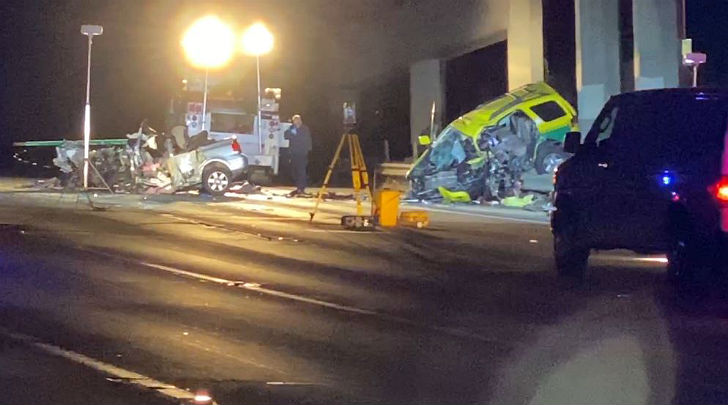 Multiple reports came in of a Volkswagen going the wrong way on the northbound freeway, first at the I-280 junction and then near the Candlestick Park off-ramp. At 12:29 a.m., Diaz said a CHP unit came across a two-vehicle collision at Paul Avenue involving the Volkswagen and Ford Escape taxi.

The CHP said the Burlingame woman was driving her Volkswagen under the influence at the time of the crash.

"It is very possible that they (the Volkswagen) could have been traveling (the wrong-way) for some time," Diaz said.

In light of the fatal collision, the CHP is reminding drivers to drive responsibly and to report possibly intoxicated drivers.

In a statement, CHP officials said, "We would like to extend our condolences to the families of all involved in this tragedy. The CHP takes DUI and wrong-way driving incidents very seriously."

Thursday's collision marks this year's 25th wrong-way collision on highways in the Bay Area this year, 10 of which have resulted in 19 deaths, CHP officials said.

"This is a problem that is affecting the entire Bay Area," said CHP - Golden Gate Division Chief Ernie Sanchez. "Rest assured that the California Highway Patrol will continue to work closely with our stakeholders, to include Caltrans, in order to identify and improve the potential on and off-ramps where motorists are entering freeways traveling in the wrong direction."

Sanchez added, "In addition, CHP will continue partnering with law enforcement agencies on proactive enforcement and work to identify avenues to prevent motorists from entering freeways from city streets, while driving in the wrong direction."

© Copyright 2019 CBS Broadcasting Inc. All Rights Reserved. This material may not be published, broadcast, rewritten, or redistributed. Bay City News Service contributed to this report.