SAN FRANCISCO (CBS SF/AP) - California's next 'big one' may not be an earthquake. According to a new study from the U.S. Geological Survey, a future volcanic eruption is not only inevitable, hundreds of thousands of people are in harm's way.

The 50-page report, California's Exposure to Volcanic Hazards, released Monday, assigns threat levels to eight volcanoes in California -- moderate, high, and very high. Most of them are located in the northern and central part of the state.

Researchers say nearly 200,000 people live, work or pass through California's volcanic hazard zones on a daily basis, and there's a 16 percent probability of an eruption in the next 30 years.

The scientists based the prediction on the amount of volcanism over the last three-thousand, or so, years.

Mount Shasta has the largest number of people in harm's way, with a daily population of more than 100,000. The threat level there is very high, according to the report.

Overall, "an average of 199,235 people live, work, or pass through a California volcanic hazard zone on a daily basis," it says.

Most of the active volcanoes lie in Northern California. The report warns a future eruption would have far-reaching adverse impacts on natural resources and infrastructure vital to the state's water, power, natural gas, ground and air transportation and telecommunication systems.

The impact would be not only on humans, but crops, livestock and animals, as well. Damage to crops such as hay and alfalfa would impact the state's dairy industry.

"Exposure of agricultural crops, pastures, and livestock to volcanic ash fall can be serious, even for a light dusting. Ash fall on forage most commonly results in digestive tract problems in livestock, including gastrointestinal tract obstruction," it says. An eruption in New Zealand killed more than 2,000 animals that grazed on pastures covered by ash.

"The next step in reducing volcanic risk involves assessing site- and sector-specific vulnerabilities and developing mitigation strategies," says the report. "This will require the collective efforts of scientists, land managers, civil authorities, lifeline operators, and communities."

Scientist-in-charge Magaret Mangan of the California Volcano Observatory says the report is not a doomsday scenario.

Rather, she says, it should be a springboard for launching studies of the vulnerabilities of specific sites.

Here is a list of the areas in the report, along with the most recent eruption, nearby towns and threat potential, according to the USGS. 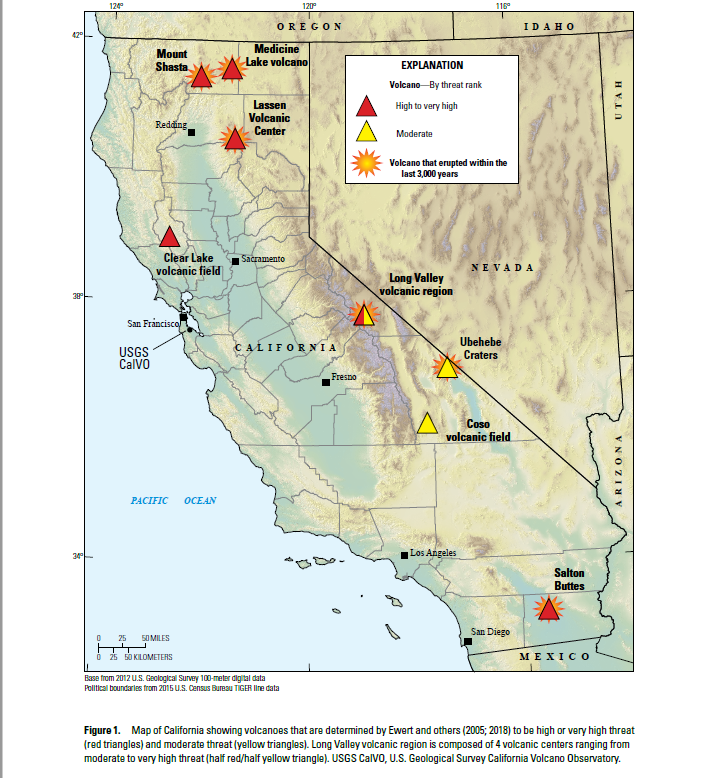 The USGS: Volcano Hazards Program has posted valuable resources and information to help people prepare for a volcanic event, which in some cases can last tens of years.

Residents who are exposed to the greatest risk should be aware of evacuation routes, have emergency provisions on hand sufficient for 2 weeks, and devise a plan for families to reunite in the event they are separated.