SAN FRANCISCO (CBS SF) -- As temperatures begin to soar over the Memorial Day Holiday Weekend, the drought conditions in the already bone-dry hills, forests and fields will only get worse.

That's the grim news from the experts. The U.S Drought Monitor, maintained as a joint venture by the National Oceanic and Atmospheric Administration and the U.S. Department of Agriculture, revealed just how serious conditions have become in the San Francisco Bay Area.

On the monitor's scale, the exceptional drought category is about as dry as conditions can get. The agency's weekly update posted every Thursday shows that almost the entire Bay Area has fallen into that category.

San Francisco, Santa Clara and San Mateo counties are just one notch down in the extreme drought category. And it wasn't just the San Francisco Bay Area that is being ravaged by arid conditions.

At Folsom Lake near Sacramento, where once there be crowds at a local marina over the holiday weekend, the docks rest on dusty soil. 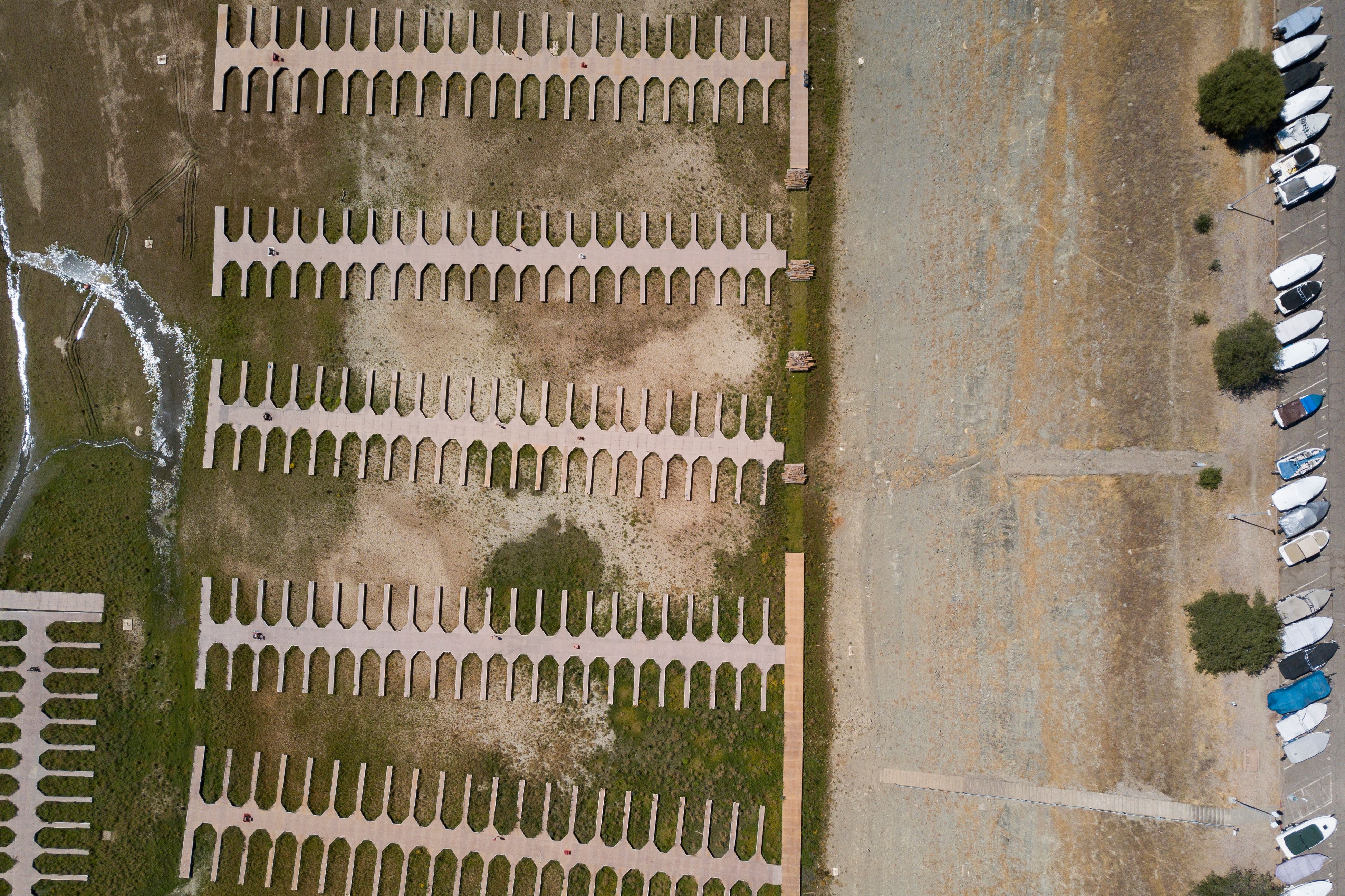 Last week, the State Water Resources Control Board that it was restricting water diversions in the Upper Russian River basin to make sure Lake Mendocino -- a vital source of drinking water -- doesn't run dry.

"Unless we immediately reduce diversions, there is a real risk of Lake Mendocino emptying by the end of this year," said Erik Ekdahl, deputy director of the Water Board's Division of Water Rights. "We need to implement the water rights system to protect supplies in case of another dry winter, which could transform the Russian River into a series of disconnected pools and restrict the availability of drinking water in the area."

According to the Water Board, as of April 30, Lake Mendocino was at 43 percent of capacity and Lake Sonoma was at 62 percent, the lowest on record for this date.

So far this year, rainfall in Santa Rosa and Ukiah is less than 40 percent of long-term averages and 2020 was, at the time, the third-driest year on record.

For Bay Area residents escaping to Lake Tahoe for the holiday weekend, they were be encountering larger beaches along the shoreline as the lake's waterline has receded. They will also notice there simply isn't much snow left on the highest peaks.

Long gone are the memories of the 2019 ski season that stretched at many local resorts past the Memorial Day weekend. 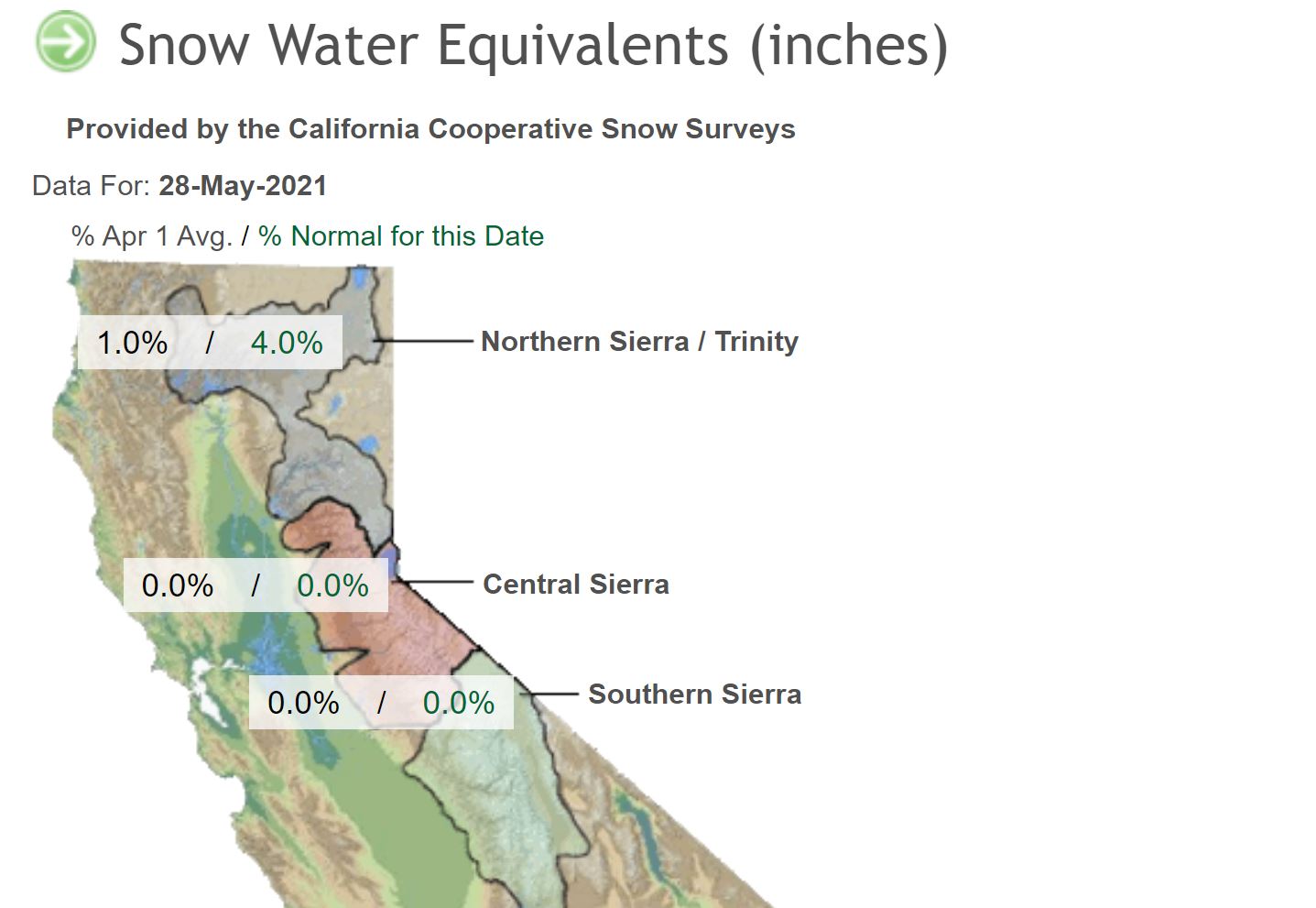 It's a little hard for Mike Giamonna to believe as he rumbles across his cattle ranch. The grass should be green and waist-high at this time of year. Instead, his cattle are foraging through inch-high stubble.

"We're seeing conditions now that we would see in July and August," Giamonna told KPIX 5. "So, what's August, September going to bring us? We don't know. It's scary."

But the biggest problem isn't the grass; it's getting enough water up to the cattle so they don't die of thirst. Natural springs that would normally refill the water troughs have slowed to a trickle or dried up completely.

Some ranchers are already trucking in water, bringing back memories of the drought of 1976.

"I remember my dad hauling water back then, but not much. The older ranches that are around here say this is far worse than what they saw in the '70s. Far worse is what they're saying," Giamonna said.