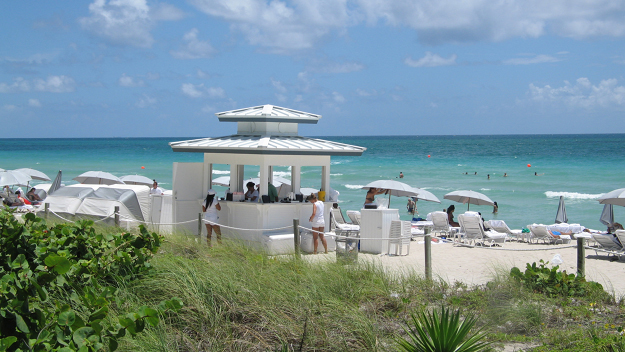 One of the most important aspects of wedding planning actually comes after couples exchange their wedding vows. That, of course, is finding a romantic destination for that perfect honeymoon. While a trip to Paris or some other international destination is always high on a short list of prospective places, it can just as tempting and in many ways more practical to pick a city closer to home. For a few ideas, here are just five of the best honeymoon destinations in the U.S.

A vibrant nightlife, amazing cuisine and one of the world's most famous beaches all make Miami Beach a phenomenal honeymoon destination. What's more, Miami Beach offers more than 200 hotels to stay at, many of which offer couples' packages, including award-winning properties like Delano South Beach, the Setai Miami Beach, Mondrian South Beach, W South Beach or the fabulous Villa Casa Casuarina, the former Versace Mansion. By day, the newlyweds can pamper themselves with a couples massage at Bliss Spa, a stroll along the beach or simply lounge away under the sun at hotel pool. At night, honeymooners can dine at a romantic restaurant such as DB Moderne led by celebrated chef Daniel Boulud, Gianni's at the Villa, or enjoy Cuban comfort cuisine at lively places like Mango's Tropical Cafe or Gloria and Emilio Estefan's Larios on the Beach.

Named America's most romantic city by the likes of Travel+Leisure and Bridal Magazine, Charleston can be the perfect setting for an unforgettable honeymoon. Internationally recognized for its historic architecture, extraordinary cuisine, breathtaking vistas and legendary hospitality, South Carolina's oldest city has a wealth of romantic things to do such as a horse-drawn carriage tour, a visit to historic Charleston City Market, the breathtakingly beautiful Magnolia Plantation and a romantic candlelit dinner at places like Circa 1886.

Other outstanding restaurants to consider in Charleston include 82 Queen, Magnolias, The Macintosh — led by James Beard Award semifinalist Jeremiah Bacon — and the extraordinary Halls Chophouse, named Yelp's Best Steakhouse in America. Of course, this historic city also has a wealth of award-winning hotels that blend classic Southern charm with contemporary luxury, such as Planter's Inn, the Spectator, French Quarter Inn, Belmond Charleston Place and the magnificent Wentworth Mansion, recently named the Best Small City Hotel in the U.S. by U.S. Travel & Leisure.

With the California Wine Country just an hour's drive away, one might find San Francisco an interesting alternative for a honeymoon destination. But the City by the Bay clearly has far more things to do, and its collection of luxury hotels and restaurants are on par with most every major destination in the world. Suggested romantic hotels to consider for an unforgettable honeymoon include the Palace Hotel, St. Regis San Francisco, Hotel Vitale, Loews Regency San Francisco and the incomparable all-suites Fairmont Heritage Place, Ghirardelli Square, recently named the most romantic hotel in the city. Historic Ghirardelli Square is also the setting for one of the city's hottest new restaurants, Waxman's Restaurant & Cafe, and a block away is the landmark Restaurant Gary Danko. Other top choices for romantic dining include Acquerello, Quince, Keiko à Nob Hill, Michael Mina and San Francisco's Michelin three starred restaurants Benu and Saison. The list of activities by day seem endless, but suggestions include a tandem bike ride through Golden Gate Park, a visit to the Legion of Honor, San Francisco Museum of Modern Art or a cocktail at the Top of the Mark with its breathtaking bayside views on the 19th floor of the Intercontinental Mark Hopkins. Two other spots not to be missed are the Ferry Building Marketplace and The Bay Lights along the famed Embarcadero, with several more outstanding dining establishments nearby including Americano Restaurant, Boulevard, Chaya Brasserie and EPIC Steakhouse.

Widely known as one of the most famous ski resort towns in the world, Vail is just one of several destinations for an intimate honeymoon in Colorado. Capturing the Old World charm and essence of an alpine village within the Rocky Mountains, this idyllic small town 95 miles west of Denver is best known as a winter wonderland during its celebrated ski season. But with a multitude of outdoor activities, enchanting accommodations and world-class cuisine, this small town at the base of Vail Mountain can be visited any time of the year. In addition to winter sports at Vail Mountain Resort, honeymooners have many year-round activities to enjoy, including an indulgent couples spa, a vibrant nightlife, tasty culinary scene and outdoor recreation like hiking, biking and rafting. Couples planning their Colorado honeymoon might want to consider acclaimed places like the Arrabelle at Vail Square, Vail Mountain Lodge and Spa, Sonnenalp Resort of Vail, the Lodge at Vail and Vail Cascade Resort and Spa. For romantic dining, top choices include Larkspur, La Tour with chef Paul Ferzacca, Matsuhisa Vail and last but not least, Sweet Basil, arguably the best restaurant in Vail.

With luxurious oceanfront resorts and breathtaking views, the Hawaiian Islands are without question one of the most popular honeymoon destinations in America. The Aloha State is a perennial choice for couples in Maui, named the world's best island for more than 20 years and recently ranked second as the world's best honeymoon island by Condé Nast Traveler. While it's practically impossible to go wrong when choosing a place to stay, Wailea stands out for its impressive selection of exceptional beachfront properties. Recommendations include Andaz Maui at Wailea, Fairmont Kea Lani Maui, Four Seasons Maui, the Grand Wailea and Hotel Wailea, named the best hotel on Maui. Each of these fabulous hotels features romantic dining such as the Treehouse at the Hotel Wailea, Morimoto Maui, Andaz Maui at Wailea Resort, Ferraro's Bar e Ristorante at the Four Seasons Maui or the Te Au Moana luau at the Wailea Beach Marriott. Honeymooners will also find plenty of outdoor activities to enjoy during their stay in paradise, such as a stroll on Wailea Beach, Spa Grande at the Grand Wailea, snorkeling with exotic fish and sea turtles from top-rated Snorkel Bob's and a ride on a classic Hawaiian outrigger.

Related: Best Honeymoon Destinations On The East Coast
Randy Yagi is an award-winning freelance writer covering all things San Francisco. In 2012, he received a Media Fellowship from Stanford University. His work can be found on Examiner.com