On the eve of America's bicentennial celebration, our young nation revolutionized the world of great wines. At an event intended to be staged just for fun, an 11-member expert panel (nine of them French) judged a new generation of California wines against some of France's most famous wines in a blind tasting -- with a shock upset result overwhelmingly in favor of the USA. The Paris Wine Tasting of 1976 (portrayed in the movie "Bottle Shock") sent New World wines on their way, led by Chardonnay and Cabernet Sauvignon from California.

Approximately 90 percent of America's wine production is from California, with its 107 American Viticultural Areas (AVAs), which as the world's fourth largest producer is surpassed only by France, Italy, and Spain.

While Napa Valley has the more famous name, neighboring Sonoma Valley is equally deserving, if less flashy. Head north over the Golden Gate Bridge from San Francisco. Napa's scenic Silverado Trail reveals a lineup of prestigious brands with mega-watt names, stunning views, and gorgeous tasting rooms like the one at Trinchero Winery , as well as charming tasting rooms with picnic tables at smaller family-run estates. In downtown Napa, visit the Culinary Institute of America at Copia, with its museum, gift shop, classes, and restaurant. Browse the Oxbow Public Market for artisan makers and rent a bike for the new Napa Valley Vine Trail which will soon span all 47 miles north to Calistoga. No car? Take a journey on the restored vintage Napa Valley Wine Train right through the heart of Napa, stopping for tastings at wineries like Robert Mondavi, Charles Krug, Raymond, and Grgich Hills.

In Sonoma Valley, the Wine Road provides a wonderful discovery route for Alexander, Dry Creek, and Russian River valleys; many offer a single- or multi-day pass good at dozens of participating wineries. From winter's bud burst to harvest crush, both destinations present wine-themed concerts, vineyard and cellar tours, barrel tastings, film festivals and food fairs, including the big Sonoma Wine Country Weekend over Labor Day. The Wine Institute taps April as Down to Earth Month with a focus on sustainable, biodynamic winemaking and September as California Wine Month.

"Virginia is for (Wine) Lovers," said Gov. Terry McAuliffe on a recent Valentine's Day promotion for the commonwealth's wine region. That message resonated across the nation, where Virginia scooped up medals at the prestigious San Francisco Chronicle Wine Competition, the world's largest award showcase for American wine. In addition to plenty of gold and silver wins in recent years, plus a 2017 best in class, the recognized excellence of estate grown Virginia grapes won't be lost on visitors looking to combine historical sightseeing with a wine country experience.

Dozens of wine trails embrace 200 wineries in seven major AVAs from Loudoun County on the outskirts of Washington D.C. to the rolling landscape of Shenandoah Valley. Explore Thomas Jefferson's Monticello home where the third U.S. president was a grape grower. Sniff, swirl, sip, and sleep at romantic country inns and farmstead B&Bs along the way. Don't miss the local Viognier, Virginia's cornerstone white varietal that has caught international attention for its success in the Monticello AVA.

Pinot noir, anybody? Fans are passionate about the soft, velvety wine produced by this finicky, thin-skinned grape. Less than an hour south of Portland, Willamette Valley and its six distinct sub-appellations are famous as the New World home to this cool climate loving varietal. Since the first planting in 1966, the 100-mile long and 60-mile wide region has grown to to about 500 wineries, many with tasting rooms and patios surrounded by views of the Cascade Mountains. Because every single one of the region's producers is small with limited production, you'll find excellent wines here that are quite simply not found anywhere outside Oregon.

Agricultural authenticity abounds in this corner of the Pacific Northwest, where the sight of a farm tractor is likely, a tour bus is not. As in other US wine regions, tasting fees are typically set against the optional purchase of a bottle. Casual wineries with a cozy fireplace may offer estate tasting flights, private reserve tastings, vineyard and cellar tours, plus food and wine pairing dinners and plenty of opportunities to meet winemakers. 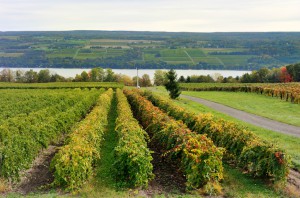 About two million years ago, in a landscape sculpted by slow moving glacial sheets of ice, 11 long and narrow lakes were carved out. In upstate New York, the shores of these clear and deep inland lakes presented a cold weather opportunity for cultivation of "Vitis vinifera" European grape varietals. This attracted a mid-20th century viticulturist immigrant, Dr. Konstantin Frank, who used methods studied in his native Ukraine to plant on the west side of Keuka Lake. Vineyards throughout Finger Lakes AVA's 120 wineries are often compared to those in Germany's Rhine River region, where Riesling is also king. It's a classic European grape that, shielded by the lake shores, withstands cold and snowy winters, producing award-winning sweet and dry wines. Other notable Finger Lakes varieties are Chardonnay, Pinot Noir, Cabernet Franc Gewürztraminer, and sparkling wines.