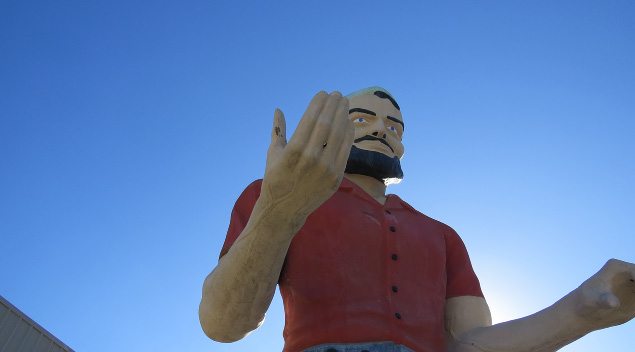 From pink elephants and green dinosaurs to giant donuts and lumbermen, roadside attractions typically offer larger than life examples of classic American nostalgia. While most of the famous curiosities are located in other parts of the country, such as Randy's Donuts in Los Angeles, the Jolly Green Giant statue in Earth, Minnesota and Cadillac Ranch in Amarillo, Texas, the San Francisco Bay Area has quite a few of its own to attract motorists to pull over for a closer look. The following are five of the very best roadside attractions in and around San Francisco.

While most of the roadside attractions in the breathtaking Napa Valley are the wineries and flowing acres of grapevines, there are a few that better fit the classic definition of a roadside attraction. Among the best is the sculpture of the Calistoga Water Delivery Truck, with the company founder Giuseppe Musante portrayed behind the wheel and his dog Frankie hilariously riding shotgun. Standing 14 feet high and 35 feet long, the six-ton sculpture situated along the historic Silverado Trail is the creation of artists Ken Beidleman and Julie Moxon, who were commissioned in 2000 to commemorate the founding of the Napa Valley's first mineral water company in 1924. A popular spot for roadside visitors to take photos, the distinctive sculpture is perched in front of the Calistoga Beverage Company, just a few minutes from downtown Calistoga. Other must-see roadside attractions in the Napa Valley include the Giant Grape Crusher statue in Napa, the Rhine House at Beringer Winery and the medieval Castello di Amorosa winery.

There's not much of a neutral position for this roadside attraction in San Francisco, as most locals seem to love it or hate it. But for anyone driving along the Embarcadero, Cupid's Span is almost impossible to miss. However, in order to get a good snapshot, it's best to park at one of the nearby lots and walk over to this 64-foot-tall bow and arrow structure, especially since there's nowhere to pull over on the very busy thoroughfare. Made of stainless steel, structural carbon steel, fiber-reinforced plastic and other materials, Cupid's Span is the creation of the late American sculptor Claes Oldenburg and his wife Coosje van Bruggen, whose other prominent works include "Dropped Cone" in Cologne, Germany, "Binoculars" in Venice, California and "Hat in Three Stages of Landing" in Salinas, one hour south of San Jose. The best time to view Cupid's Span is during the day, when visitors can also enjoy sweeping views of the San Francisco Bay. But at night, the sculpture takes on a magical appearance, especially when dazzling Bay Lights return this year.

One of the last remaining vestiges of a different era before Silicon Valley tech companies radically changed the landscape of Santa Clara Valley can be found quietly tucked away next to a tech company and just steps from the Sunnyvale Caltrain Station. Aside from history buffs and longtime residents, it's not well known that the Santa Clara Valley was once a major producer of nuts and fruits and, at one time, the world's leading region for canning and dried fruit packing, receiving a significant boost for the demand of canned fruits and vegetables during World War I. By the early 1920s, the Libby's cannery in Sunnyvale was the largest in the world and operated until 1983, which was about the same time as the first tech boom, amid the rising success of local companies like Apple, Intel and HP. Today, the Libby cannery has long disappeared, except for a single water tower that's now both a cultural landmark and one of the premier roadside attractions in the South Bay. The original tower was replaced by the current structure in 1965. The best time to visit might be over a weekend, as parking is limited.

At first impression, an industrial park in Hayward might not sound like the ideal spot for a roadside attraction. But upon a closer of inspection of Bell Plastics, one might say this is the location for the very best roadside attraction in the entire Bay Area. That's because Bell Plastics owner Bruce Kennedy has collected a number of the giant fiberglass advertising statues known as Muffler Men, which were a common sight atop muffler shops and other stores across the country for about a 10-year period beginning in the mid-60s. But Kennedy owns more than just the 20-foot tall Muffler Men like Paul Bunyan, Cowboy Don and Big Mike. Also on the property are a 16-foot tall Gas Guy, one of only two Uniroyal Girls in the country, an unpainted Bob's Big Boy and one of the iconic Doggie Diner signs that prevailed across the Bay Area for nearly 40 years. Bell Plastics is a custom plastic fabrication company that has been in business since 1979. Visitors are advised to not climb the fence for photos when the business is closed.

Ever since its public unveiling in 2005, countless numbers of Star Wars fans have made the trek to pay homage to the Yoda Fountain at Letterman Digital Arts Center in the San Francisco Presidio. But following the phenomenal record-shattering success of "Star Wars: The Force Awakens," crowds visiting the Lucasfilm campus are expected to be much larger for months to come. One of the most beloved characters from the Star Wars movie franchise, Yoda is a Jedi master believed to be over 900 years old, whose powerful ally is the "Force." The now iconic water fountain is not easily seen directly from the road, but visitors can easily park on Dewitt Road, then walk just a few feet to bow, pray or even take a selfie with the all-powerful Jedi warrior. Weekday visitors should also take time to visit the lobby of Building B, directly behind the Yoda Fountain. Open to the public during regular business hours, the lobby has on display a number of Star Wars memorabilia, such as a likeness of Darth Vader, a statue of R2D2 and Yoda's unmistakable lightsaber. Another "life-size" statue of Yoda can be seen at Imagination Park in San Anselmo, along with a statue of the legendary Indiana Jones.