Holiday travelers dreaming of a White Christmas this year can find joy in knowing they can hear sleigh bells in the snow across the country. Although the Columbia Inn and Vermont's Pine Tree from the classic 1954 movie "White Christmas" were actually Hollywood sound stages, waking up on Christmas Day to discover cascading snowfall through the windows has become a truly American tradition. Irving Berlin's timeless Christmas classic made famous by Bing Crosby in not one, but two movies is also the best selling record of all time, as well as the best selling Yuletide single, with a staggering 100 million records sold worldwide. For a very special holiday season, the following are five of the best places in America to marvel in the ultimate White Christmas.

Residents and visitors to New Hampshire's capital city know there's a high probability they'll see snow outside when they wake up on Christmas morning. What's more, there are a handful of outstanding ski resorts, all within an hour's drive from Concord, including Pats Peak and McIntyre Ski Area, near Manchester. While winter sports such as skiing, snowboarding, cross country skiing and snowmobiling are among the most popular activities during the holidays, there are plenty of other events to enjoy. The City of Concord has a rich history and the state capitol building is the nation's oldest in which the legislature still occupies its original chambers. The Capitol Center for the Arts will hold The Merrimack Holiday Pops the weekend before Christmas and last but certainly not least is the possibility of viewing the Northern Lights (Aurora Borealis) on Christmas for a truly magical winter wonderland.

While any destination in the Great Lakes region is practically assured of a White Christmas, the Wisconsin state capital is an excellent choice for culture, fine dining and upscale accommodations in a moderately sized urban area. Like most cities expecting snow-covered streets during the holidays, winter sports plays a vital role in the local economy, with three cross country parks, sledding hills, snowshoeing and more than 10 ice skating parks. For skiing and snowboarding, the closest public ski resort is the highly rated Tyrol Basin in Mount Horeb, 29 miles east of Madison. There are also plenty of great sightseeing opportunities in the city named after the fourth U.S. President including the Wisconsin State Capitol whose dome is the nation's second tallest, the internationally acclaimed University of Wisconsin, Museum of Contemporary Art and Overture Center for the Arts. Even with all of the great options in the city, one of the best things to do in Madison is simply to sit in front of a cozy fireplace and admire the captivating blankets of snow while celebrating one of the most important holidays of the year. 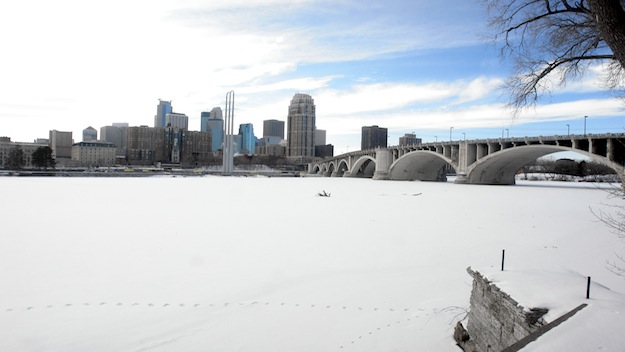 
One of the best times of the year to visit the aptly named City of Lakes is during the holidays. The city comes alive with a dazzling display of holiday lights, as does sister city St. Paul, the state capital across the mighty Mississippi River. Winter activities such as snowshoeing, cross country skiing, ice skating, ice fishing, sledding and even winter golf can all be enjoyed in the Twin Cities. For shopping lovers, not far from city center is the enormous Mall of America, the world's most visited shopping mall with more than 500 stores, 50 restaurants and a seven-acre theme park. If visitors prefer to stay away from holiday crowds at the Mall of America, good options include heading out to the popular Hyland Ski and Snowboard Area, 10 miles away, or a performance of "The Nutcracker" at the Orpheum Theater.

With postcard-perfect images of glistening frozen rivers amid snow-kissed evergreens, Portland is clearly one of the best American cities for a White Christmas. Featuring stunning views of the rugged Atlantic coastline, the state's largest city kicks off the holiday season with its annual Christmas Tree Lighting the day after Thanksgiving in Monument Square. In addition to the impressive 55-foot blue spruce filled with thousands of colorful lights, downtown Portland is awash with breathtaking holiday lights, which adorn the trees, storefronts and even boats in Portland Harbor. Also, during the days leading up to Christmas, the public can enjoy free sleigh rides from Monument Square. Lastly, there are plenty of winter sports to enjoy, from ice-skating at Deering Oaks Park, snowmobiling at the New England Outdoor Center and cross-country skiing at Pineland Farms.

Irving Berlin's "White Christmas"first became an iconic American song in the 1942 movie "Holiday Inn" starring Bing Crosby and Fred Astaire. But the song reemerged in yet another Bing Crosby film 12 years later in "White Christmas," based in Vermont and the version most likely to be rebroadcast on television. One of New England's best ski areas is Stowe Ski Resort, boasting up to 750 acres of skiable area, a 2,132-foot vertical descent off Mount Mansfield and a bevy of winter activities. The town of Stowe, whose most prominent structure is the picturesque Stowe Community Church, features an exceptional collection of overnight accommodations and more than 45 award-winning restaurants. But perhaps the best form of entertainment for a truly unforgettable White Christmas might just be the handful of businesses offering sleigh rides to "dash through the snow."