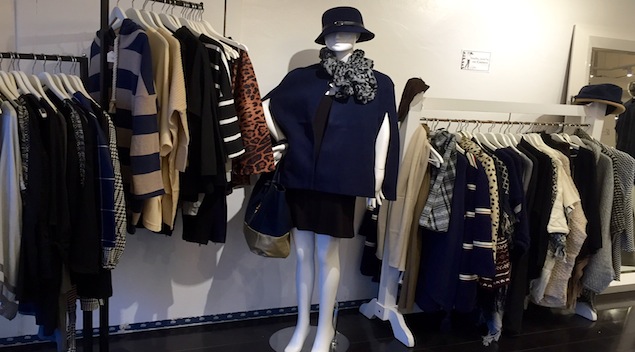 What do you wear on those days when denim just won't cut it? Casual dress Fridays were initially introduced in the 1950s, followed by a handful of decades before dress down Fridays -- or any other days -- could be considered mainstream. For those who can't or won't wear jeans and hoodies to the office, here are three of Sacramento Street's shops, plus two Downtown/Financial District retailers for men, who favor a traditional office-centric fashion sense of style.

Owner Christina Spaulding is a San Francisco native from Presidio Heights, where she opened the shop named after her dog about five years ago. Her trained architect's eye for detail is seen in the curated collection that's all about a sense of style for San Francisco women. That look is interpreted via comfortable, sophisticated pieces and classic sportswear with subtle flair that isn't found on all the department store rails. You can build an entire outfit to include shoes, scarves and Spanx. The only potential problem is loving everything too much. Some favorite brands are A.L.C., Equipment, Repetto, Tibi, Joie, Vince and Cosabella.

While you're in the neighborhood, don't overlook the men's and women's store locations for this well-respected consignment shop that's been a fixture for ages. Seriously wonderful finds in good condition await, some still bearing original price tags, in rather tightly packed rails in narrow aisles. The women's designer section features timeless labels such as Chanel, St. John's, Jil Sander, Giorgio Armani and more. Browse among coats, jackets, trousers, skirts, blouses, sweaters and dresses arranged by size. Small but functional fitting rooms are in the rear, where rows of shoes and boots are hit or miss — often a hit for those who stop in regularly. Handbags, socks, jewelry, sunglasses and more fill every nook and cranny. Across the street, men can find suits, sports jackets, dress shirts, leather jackets, shoes and belts.

Lots of fine Italian brands (Etro, Luciano Barbera, Lorenzini, Piazza Sempione) are sprinkled with a few English, French and selected American ones (Barbour, John Laing, Les Copains, Mulholland) for fashion-conscious men and women. In 1981, owner Michael Sabino first established Button Down in Cow Hollow as a cozy, antique-filled space that feels like a living room, kitted out with leather seating for shopping companions. Now in Presidio Heights, he cherry-picks beautiful accessories and garments made from quality fabrics. Check out occasional sidewalk sales to realize some deep discounts from time to time.

Not far from where the cable cars clang, this gentlemen's clothier is a third-generation, family-run haberdashery. If you're looking for a 100 percent woven silk tie decorated with the San Francisco moving landmark, you'll find it here available in black, burgundy, gold, navy and red. To this day, the shop caters to men of traditional taste with an inventory featuring made-to-measure suit tailoring and ready-made suits from Southwick seersucker to Harris tweed and herringbone. Find English spread collar shirts, silk bow ties, Scottish cashmere sweaters and Stetson fedoras, as well as an in-store traditional barbershop.

Get a suit, get a shave, get a scotch on the rocks. Housed in prime Financial District premises on a prominent corner facing the TransAmerica Pyramid, Wingtip is a one-stop gentlemen's lifestyle stop. Retailer, barbershop and private club are all rolled into one in the former Bank of Italy building. Classic European brands such as Barbour, Dunhill, Davidoff, Ghurka, Holland & Sherry, St. James of London and S.T. Dupont are mixed in with the edgier, but only slightly. Wingtip says they cater to five looks: Wall Street, old school, professor, sportsman and hipster.

Related: Ask An Expert: Men's Fashion Forward Thinking For The Season In San Francisco
Laurie Jo Miller Farr loves walkable cities. A tourism industry professional and transplanted New Yorker by way of half-a-lifetime in London, she's writing about the best of the bay and beyond for Bay City Guide, AXS, Examiner and more. Examiner.com.