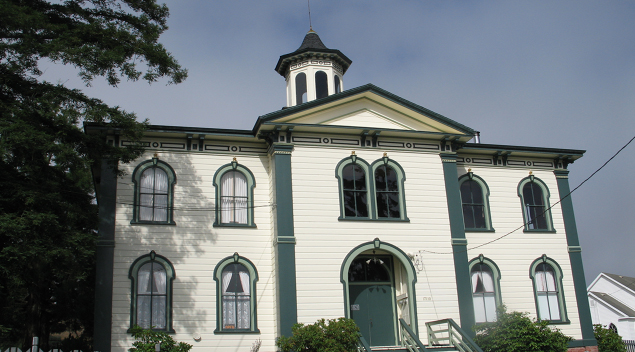 The Bay Area has long been a familiar setting for moviemakers and some of the most famous films ever to grace the silver screen. Hundreds of films have been filmed entirely or partially here, from cinema classics like "Dark Passage," "Dirty Harry," "Harold and Maude" and "The Graduate"; to more recent award-winning films like "Milk," "Blue Jasmine" and "Moneyball". But whittling down the list to a select few is an arduous task and certainly up for a tremendous amount of debate. While the following movies may all seem outdated to many movie fans, all have withstood the test of time and are widely viewed as among the greatest films ever made. Here are five of the best movies filmed in the San Francisco Bay Area.

Loosely based upon a real event that occurred south of Santa Cruz in 1961, "The Birds" was Alfred Hitchcock's follow up to his 1960 horror masterpiece, "Psycho." With Rod Taylor, Tippi Hedren and Suzanne Pleshette in the lead roles, "The Birds" tells the story of an inexplicable event when countless numbers of seagulls, crows and other birds descend upon the quiet seaside town of Bodega Bay and start attacking people. Much of the filming took place in Bodega Bay, but one of the most memorable scenes occurred at the now iconic Potter School House in the nearby town of Bodega, with two public tours scheduled this year. The film is considered the last great film from the "Master of Suspense" and is ranked seventh on the American Film Institute's (AFI) 100 Most Thrilling Films.

Filmed almost entirely in San Francisco, "Bullitt" featured one of the most thrilling and most famous car chases in cinematic history. The action film starred Steve McQueen as San Francisco police detective Frank Bullitt, who was assigned to protect a mob informant prior to testimony. The movie was a huge hit, both critically and commercially and earned a number of honors and awards, including the Academy Award for Film Editing and the National Film Registry. Along with a 10 minute segment known as the"grandaddy of car chases," other prominent locations displayed in the film, were the Golden Gate Bridge, Grace Cathedral, the Mark Hopkins Hotel and the former Enrico's Sidewalk Cafe.

Released just before news of the Watergate scandal broke out, this conspiracy thriller was also filmed almost entirely in San Francisco. The film starred Gene Hackman as a paranoid, but respected San Francisco surveillance expert hired to record conversations of a couple who routinely met in a crowded Union Square. "The Conversation" was Francis Ford Coppola's directorial follow up to "The Godfather" and was nominated for Best Picture of the Year at the 1974 Academy Awards. Ironically, the film with a perfect rating from top critics on Rotten Tomatoes lost out to Coppola's other film released that year – The Godfather II.

Based upon the Dashiell Hammett detective novel, "The Maltese Falcon" is widely regarded as the first film noir and among the greatest mysteries ever written. The movie featured the legendary San Francisco private investigator Sam Spade and the priceless figurine encrusted with rare jewels with a layer of black enamel to hide its true value. Among the familiar San Francisco filming locations were the San Francisco Ferry Building and the Golden Gate Bridge, with 111 Sutter Street the fictional location of the detective agency. A replica of the Maltese Falcon is on display at John's Grill, a former haunt of Sam Spade and his creator Dashiell Hammett.

This Hitchcock classic primarily set in the Bay Area opened to mixed reviews and was believed to be a commercial failure. But years later, the stylized psychological thriller has become a cinema classic, currently ranked as AFI's ninth greatest movie of all time. Many prominent locations in San Francisco were featured in the film, most notably Fort Point, where Kim Novak's character Madeleine plunges into the chilly waters of the San Francisco Bay only to be saved by John Ferguson ( James Stewart), who battles his acrophobia to save her. Other familiar landmarks depicted in the film include the Legion of Honor, Mission Dolores and the Empire Hotel at 940 Sutter Street, now known as the Vertigo Hotel.