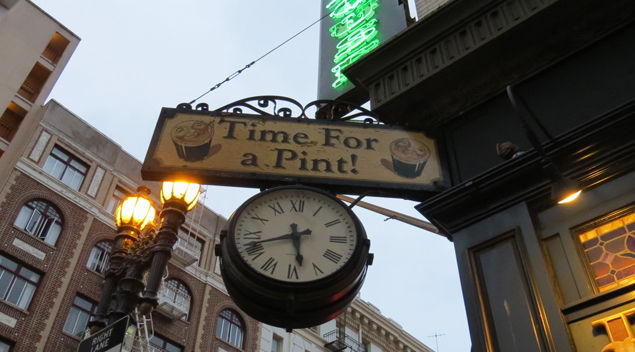 When it comes to St. Patrick's Day, the Bay Area really knows how to throw a party. San Francisco hosts one of the country's largest St. Patrick's Day parades on the Saturday before and the festivities continue on to the day where most everyone wears green unless you want to be pinched. While most any bar will be celebrating in some fashion with great food, festive music and plenty of drink, the real action will be at the numerous Irish bars spread across the entire Bay Area. Here is a look at just five of the best.

Located in one of the busiest sections of the city, Johnny Foley's is expected to be packed with revelers for St. Paddy's Day. Not only is this classic replica of a traditional Irish pub just steps away from Union Square, it's also a short walk from Market Street, where one of the country's largest Saint Patrick's Day parades will be held just days earlier. Visitors can enjoy traditional Irish foods such as corned beef and cabbage, cottage pie, bangers and mash and lamb stew, as well as a nice selection of Irish beers, including Smithwick's Ale, Guinness Stout, Murphy's Irish Stout and Magner's Cider. Live entertainment is expected to be on hand throughout the day, which may include the very popular Dueling Pianos show.

Related: Celebrate St. Patrick's Day All Over The Bay Area

The vibrant nightlife at Santana Row will be enhanced on St. Patrick's Day and the liveliest spot is expected to be Rosie McCann's. Rosie's is a family-owned business founded in Santa Cruz before adding a second pub and restaurant in Silicon Valley. Excellent traditional foods will be served all day, along with comfort food such as fried calamari, hot wings, quesadillas and pizza, and flavorful entrees like coriander wild salmon, free-range chicken parmesan and the "The Perfect" filet mignon. Rosie's has more than 25 beers on tap, including a nice selection of craft and Irish draft beers in addition to several Irish whiskeys, local wines and specialty cocktails.

St. Patrick's Day parties will be found all over San Francisco but the Mission District is certain to be one of the livelier hotspots. That's because there are many Irish pubs all located within a mile or two, including The Phoenix. More than 35 draft and bottled beers are available here, with Irish labels like Guinness, Magners Irish Cider and Harp Lager, and local craft selections like Anchor Steam and Lagunitas IPA. Because The Phoenix will be packed to capacity on St. Patrick's Day, other great Irish pubs in the Mission District are also worth a visit, such as The Napper Tandy, The Dubliner, The Liberties and Clooney's Pub.

Known as the "Home of Traditional Irish Music in the Bay Area," The Plough and the Stars is also consistently mentioned as one of the best Irish pubs in San Francisco. Live entertainment is featured almost daily and the popular Inner Richmond spot has an outstanding selection of beers, along with what may be the best food menu amongst all Irish pubs in the Bay Area. The Plough and the Stars serves lunch and dinner, including impressive prix fixe dinners, normally served for larger parties. Beer prices are very affordable, like a 20-ounce draft of Guinness Stout for $6, a 16-ounce draft of Harp Lager for $5.50 and a 12-ounce bottle of Magners Irish Cider for $5. The Plough and the Stars claims to be the best, most authentic Irish pub in San Francisco and its loyal regulars will back it up.

Something seems to be happening every night at The Starry Plough and this popular East Bay pub will have some very special entertainment for St. Patrick's Day. Only beer, wine and wine liquors are served here, along with teas and non-alcoholic beverages, but a pint of Guinness Irish Red Ale is just $5 and Irish Dry Stout is $6.50 and most pitchers of beer sell for $19. The regular menu doesn't have a wide selection of traditional Irish fare, instead concentrating on common comfort foods like buffalo wings, burgers, pizzas and sandwiches. But on Sundays and Mondays, The Starry Plough offers corned beef and cabbage and shepherd's pie, two traditional dishes likely to be offered come St. Patrick's Day. First opened in 1973, The Starry Plough has hosted several high-profile music acts over the years, like Cake, Green Day, Smashing Pumpkins, Rambling Jack Elliott and Ani DiFranco

Related: Best Bars To Celebrate St. Patrick's Day 2013 In The Bay Area
Randy Yagi is a freelance writer covering all things San Francisco. In 2012, he was awarded a Media Fellowship from Stanford University. His work can be found on Examiner.com Examiner.com.