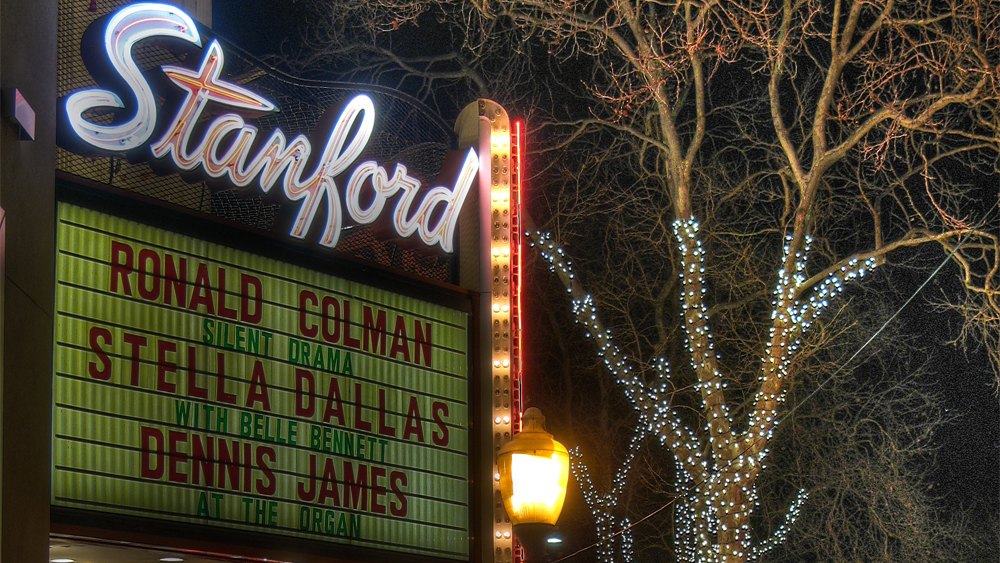 How about dinner and a movie for a quintessential night out? Some classic movie houses specialize in screening foreign language, independent and art films. Other vintage movie houses are independently owned and operated, screening mainstream as well as various genres, but offering old-time surroundings. In this day and age, it's refreshing to have a movie experience in an intimate setting bearing no resemblance to a multiscreen cineplex.

Right in the heart of downtown Palo Alto with its tree-lined sidewalks, you cannot miss the large neon marquee of the 1925 movie house. Step inside to admire the mighty Wurlitzer organ, velvet curtains, chandeliers and gilded interiors, all throwbacks to Hollywood's golden age and sleek art deco cinemas. Off the lobby, when it's open for viewings, see the gallery of vintage movie posters and more from the collections of this theatre's non-profit foundation. Recent film festivals have included Joan Fontaine, Barbara Stanwyck, Shirley Temple, Alfred Hitchcock, Frank Capra, films of the 50s and, of course, Bogart and the inimitable 1942 "Casablanca."

Palo Alto has the best of both worlds. Aquarius is an old-fashioned cinema with DLP digital projection and sound, two separate screens in buildings connected underground, on-street and parking lots nearby, plenty of dining choices in the neighborhood and a website, too. Since 1985, this 60s-era movie house near the campus of Stanford University and the Caltrain station is one of the nation's 50-strong locations operated by Landmark Theatres. Aquarius Theatre shows independent and foreign films with a history that includes early screenings of work by cinematographer Haskell Wexler and director Francis Ford Coppola.

South Bay movie buffs know this spot at the end of Santana Row in a perfect location for dinner and an indie flick. In trendy Santana Row, here's a small cinema for foreign, artsy and indie film showings. While CinéArts claims, and some agree, that it offers "moviegoers the best selection of Art and Independent films in the industry," the group is a division of Cinemark Theatres, one of the world's largest chains of movie theaters. The building itself is not historic and regulars caution about parking challenges.

A blade neon signage rises above an art deco marquee, terrazzo floors sparkle, the ticket booth gleams. All eyes are on a spring 2014 re-opening for the old/new downtown historic landmark. With so many vintage theaters closing their doors due to an unsustainable business model, it's a joy to see new life breathed into this 1915 beauty. Modern conveniences and state-of-the art digital facilities complete the picture.

It's a 30-year love story between Camera Cinemas and the South Bay, which boils down to three current locations: Camera 3 and Camera 12 in downtown San Jose and Camera 7 in Campbell. Fans talk about cheap prices, senior and student discounts, "diaper day" screenings for moms with toddlers, date nights and the pizza. Screenings are a combination of current, classic, cult, artsy and indie. See Sundance Festival winners and check out Silicon Valley's own Cinequest Film Festival before next March rolls around.

In Cupertino, you'll find the best deal in the valley, if we're talking price. See Hollywood hits on their second time around before going to DVD, indie flicks, classics, shorts, animations and assorted. Tickets are a fraction of what you'd spend elsewhere, but the projection and sound are a throwback. Remember pre-digital days when you could still hear the roll of the projector? Local cinema owners support community events, have screenings for local filmmakers, participate in the International Film Showcase, offer Bollywood and Chinese films, family nights and $2 Tuesdays.

Laurie Joe Miller Farr is a freelance writer covering all things in her adopted San Francisco. A dedicated urbanite, she's a transplanted New Yorker by way of a couple of decades in London as a hotel sales and marketing manager. Follow her work on @ReferencePlease, USA Today, Yahoo! and on Examiner.com.