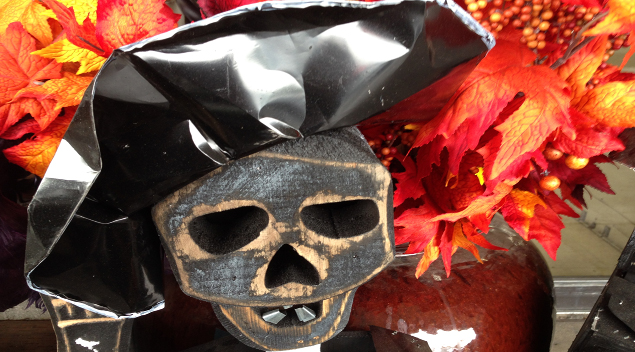 Halloween is upon us and for countless numbers of kids across the Bay Area, it's time to get ready for one of their favorite events of the year. But it's not just Bay Area kids who enjoy the festive activities associated with this annual celebration. Indeed, people of all ages have been busy setting up Halloween decorations in their homes in anticipation of showcasing their artistic talents to the crowds that will appear well before the sun sets. If you are looking to visit a different neighborhood this year for Halloween, or are just curious where amazing Halloween decorations can be found, here is a look at five of the best spots from five different regions around the San Francisco Bay Area.

Halloween festivities begin early in this previously unincorporated community established in the mid-1800s, with toddlers, preschoolers and kids in strollers enjoying trick or treating at local businesses between 11 a.m. and 12:30 p.m. School-aged kids in costumes get their chance to receive tasty Halloween treats beginning at 3 p.m. Both events are held in the heart of Willow Glen (now part of San Jose) along Lincoln Avenue between Willow Street and Minnesota. In the evening, homes in Willow Glen and its neighborhood to the south, Cambrian Park, are consistently noted for boasting the best South Bay spots for trick-or-treating and delightful Halloween decorations. Named last year's second best San Jose neighborhood for trick or treating (behind Willow Glen) by Zillow, Cambrian Park is also well-known around the Bay Area for its Christmas light displays, particularly on Camino Ramon. Just minutes from either South Bay neighborhood is the legendary Winchester Mystery House, guaranteed be one of the scariest local places to visit, particularly during the evening Flashlight Tours on selected dates in October and every Friday the 13th.

In a city full of celebrated neighborhoods known for dazzling Halloween decorations, a four-block stretch along Belvedere Street in Cole Valley is arguably the most acclaimed. On Halloween, that section is blocked off to city traffic, allowing trick-or-treaters, parents and others to marvel at all of the lavishly decorated homes and the sometimes quirky costumes worn by its residents.

The street, also known as "Hellvedere" on Oct. 31, is typically filled with people well before the sun sets, but the party really gets started as it grows darker. While every home will showcase its own set of unique decorations, like haunted garages, skeletons embedded into ground and extravagantly carved pumpkins, the biggest attraction in previous years have been the costumed residents who put on a comical Halloween-themed "stage show" in front of their large picture windows. Other notable places to visit in San Francisco are the stately homes in St. Francis Wood and on 24th Street between Church and Castro streets in Noe Valley.

Related: Best Places For Halloween Decorations In The Bay Area

Believed to have been originally created to ward off evil spirits, jack o' lanterns have been the most enduring tradition of Halloween in America and other parts of the world. In the Bay Area, there is no greater concentration of pumpkin farms than in Half Moon Bay, known locally as the Pumpkin Capital of the World and host to the annual Half Moon Bay Art and Pumpkin Festival. While the very popular pumpkin festival features crowd favorites like the World Champion Pumpkin Weigh-Off and an entertaining pumpkin carving contest, the event lasts for just a few days. However, Arata's Pumpkin Farm and Lemos Farm both feature family-friendly Halloween attractions well in advance of All Hallow's Eve, including haunted houses, kiddie train rides and an enormous maze created from several hay bales. The Halloween decorations at the farms may not match up to the cutting-edge displays at places like Great America, but a trip to a Bay Area pumpkin farm has been an October tradition for decades.

Known as the very best place in Sonoma County for trick-or-treating, McDonald Avenue in Santa Rosa completely lives up to the hype. Located in the McDonald Historic District, McDonald Avenue is a very affluent section of the city, filled stately homes such as the 19th century McDonald Mansion, which was owned by a local tech entrepreneur in the 1,000 block. Additionally, another home in the 800 block of McDonald Avenue gained international notoriety after being prominently featured in the popular 1996 horror film "Scream." The McDonald Mansion has appeared in major Hollywood films, such as the iconic 1959 Walt Disney movie "Pollyanna" and homes in the 800 and 900 block appeared in the 1943 Alfred Hitchcock movie "Shadow of a Doubt." The lively McDonald Avenue gets going before sunset and will be blocked off to road traffic. Past Halloween decorations have included fog machines, laser lights, exceptional home Halloween displays sometimes featuring scenes from a classic horror film and a cavalcade of glittering lights, along with a myriad of well-crafted jack-o'-lanterns.

Local kids say there might be better places for trick or treating, but kids and adults both agree the best decorations in Berkeley and maybe the entire East Bay can be found on Russell Street. Located in the Elmwood neighborhood, Russell Street is blocked off until 8:30 p.m. between College Avenue and Claremont Avenue, in the shadows of the historic Claremont Hotel. In what has been an annual tradition for several years, thousands of costumed kids descend upon the haunted neighborhood, in addition to a mixture of parents, teenagers, students from U.C. Berkeley and other sightseers. Past Halloween events have featured a stunning array of intricately carved jack o' lanterns and state-of-the-art light displays with animated characters that sing and dance familiar Halloween-related tunes.