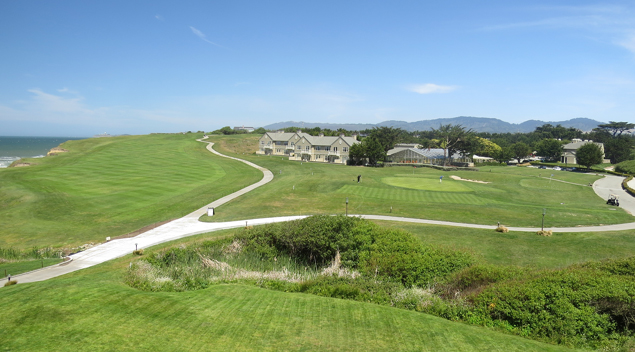 When it comes to pointing out the best golf courses in America, golf experts will typically include Cypress Point and Pebble Beach along California's Central Coast. But unless you know a member of the very exclusive Cypress Point Club or want to shell out $500 for a round of golf at Pebble, your better options are further north, in the San Francisco Bay Area. From golf courses in the California Wine Country like Silverado and Mayacama, to golf links in the South Bay like Cinnabar Hills, there are several championship-caliber courses to enjoy all over the entire region, and at far better rates and availability. Here is a brief look at five of the best in the Bay Area.

Amid spectacular views of Half Moon Bay and the rugged shores along the Pacific Coast, Half Moon Bay Golf Links features two world-class 18-hole golf courses. The original Old Course, designed by golf legend Arnold Palmer and renowned golf architect Francis Duane, is an 18-hole, par-72 course and 7,003 yards from the back tees. The more scenic Ocean Course was designed by award-winning architect Arthur Hills and is 6,848 yards from the back tee. Both courses are open to the public and reservations can be made online or through packages offered by the Ritz-Carlton Half Moon Bay. Last year, the Ritz-Carlton, Half Moon Bay was named "North America's Golf Resort of the Year" by the International Association of Golf Tour Operators (IAGTO).

Nestled within the coastal foothills of the Santa Cruz Mountains, Pasatiempo is an 18-hole course designed by legendary golf course architect Alister MacKenzie. First opened in 1929, Pasatiempo is a 6,500 yard, par-70 course and is the recipient of multiple awards, including "Number 1 Public Course in America" and one of the top three "Courses You Can Play in California." Considered as one of the world's greatest golf architects, Alister MacKenzie is best known for designing two of the world's most famous golf courses — Cypress Point and Augusta National, host of the annual Masters Tournament. MacKenzie spent the last four years of his life in Santa Cruz, living at his home overlooking the sixth fairway at Pasatiempo.

Located 30 minutes south of San Jose, Rosewood CordeValle is a 45 room luxury resort with an award-winning golf course designed by Robert Trent Jones, Jr. The 18-hole, 7,360-yard, par-72 championship golf course features a number of tees and has a rating of 76.3 and a slope rating of 146 for the furthest teeing ground. Rosewood CordeValle has earned a number of golf resort awards, including being listed among "America's 100 Greatest Public Courses" by Golf Digest in January and a "Premier Resorts: Gold Medal" from Golf Magazine. Later this year, Cordevalle will host the 2015 PGA Cup and, in 2016, the U.S. Women's Open.

TPC Harding Park is a municipal golf facility managed by the City and County of San Francisco featuring both an 18-hole and nine-hole course. Located less than a mile from the Pacific Ocean, Harding Park first opened in 1925 and was originally designed by famed architects Willie Watson and Sam Whiting, who also collaborated in designing the Lake and the Ocean courses at the neighboring Olympic Club. The 18-hole, par-72 championship course is 7,169 yards and has hosted several major golf tournaments, including the 2009 Presidents Cup and this year's WGC-Cadillac Match Play Championship won by the world's number one-ranked golfer Rory McIlroy. In 2020, Harding Park will host the PGA Championship, one of the four grand slams of golf.

Located just south of TPC Harding Park opposite Lake Merced, the Olympic Club is a private facility with three golf courses. First established in 1860, the Olympic Club is the oldest athletic club in the country and was also recognized by the United States Golf Association (USGA) as one of America's first 100 golf clubs. The Lake Course is a 7,170-yard, par-71 course and has the highest rating of the three at the Olympic Club. The Ocean Course, designed by former PGA pro golfer Tom Weiskopf, is a 6,925-yard par-71 course and the nine-hole Cliff Course is 1,800 yards and designed by Weiskopf and golf course architect Jay Morrish. Over the years, the Olympic Club has hosted three U.S. Amateurs, two Tour Championships and five U.S. Open Championships, most recently in 2012.

Related: Best Golf Courses In The U.S.
Randy Yagi is a freelance writer covering all things San Francisco. In 2012, he was awarded a Media Fellowship from Stanford University. His work can be found on Examiner.com Examiner.com.