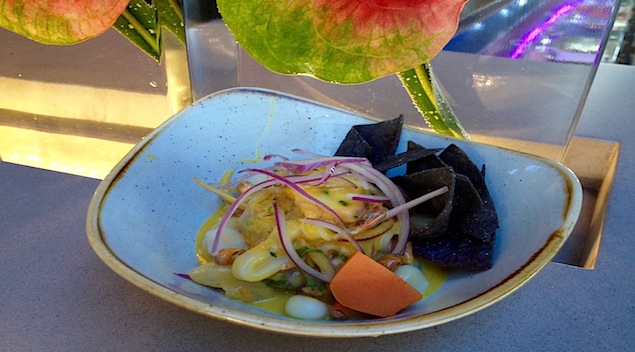 "If Peru has a national dish, it's probably ceviche," said Anthony Bourdain on a trip to Lima to get a taste. Ceviche is made of raw fish denatured by citrus juice, which is why it's so tender, fresh and tangy. Peruvian cooks say a firm white fish like halibut, flounder, sole, corvina-sea bass or cod is the right choice — quality and freshness cannot be over-emphasized. The lime juice should be balanced with a bit of red fresno and habanero peppers and spices (red onions, cilantro, ginger, celery). Ceviche should always be served immediately.

Get your authentic ceviche with a wow factor, with close-up views of the bay included. Patron/Chef Gaston Acuriohe, a household name in Peru, is famous for the dish for which the restaurant is named. Made with 100 percent sustainably caught fish and shellfish according to Monterey Bay Aquarium guidelines,  it's briefly marinated in leche de tigre. What is the secret of leche de tigre? Ask a dozen chefs and you'll get a dozen answers...the best answer is that it must be prepared by a Peruvian! If you can't decide which version to try, go for the Ceviche La Mar featuring Clásico, Mixto, Chifa and Nikei avocado, nori and sesame in a tamarind leche de tigre.

At this tiny, authentically Peruvian family operation, in business since 2012, no dinner is served and no reservations are taken. However, you'll have no reservations about Cholo Soy's terrific ceviche, served Monday through Saturday until 4 p.m. Blink and you'll miss Cholo Soy. So, look carefully as you pass the corner building, Plaza Adelante, at 19th and Mission. Ceviche aficionados say this affordably-priced place, called "secretly awesome" by Zagat, serves the best ceviche in the city. Nab one of the handful of tables or bar seats to see whether you agree. Best ceviche to order? Whatever Chef Yeral Caldas is serving up.

Try ceviche marinade, leche de tigre, served as a chunky seafood cocktail. There's another drinkable version with the house specialty of crispy ceviche, pieces of petrole sole served with crispy youca, cancha and aji amarillo, served with a leche de tigre shooter. The small dish of ceviche mixto dish of fish, calamari and tiger shrimp is popular, and there's also a ceviche de pescado featuring fresh red snapper. Pair your ceviche with the house pollo a la brasa. The Castillo brothers, Martin, Antonio and Eduardo, have brought their Peruvian-style rotisserie concept into locations at 1001 South Van Ness and at 5800 3rd Street in Bayview.

And now there are two. Loló has moved to Valencia Street and re-invented the original location that bears the ceviche reference. Move into Mexican-style ceviche served here as shrimp and rock fish citrus, roasted pepper sauce, avocado and salted peppercorns. Calling their inspiration, "the flavors of Jalisco, the western Pacific Mexican district encompassing Guadalajara," Chef Jorge Martinez and his wife, Lorena Zertuche, also serve their ceviche at Loló at the newer location, a colorful space at 974 Valencia Street, near 21st Street.

Yes, it's in the Fillmore Street stretch of Pacific Heights; you've just found somewhere for not-in-the-Mission Peruvian ceviche. The sampler ceviche is custom-made for indecision, as there are seven different ones on the menu. It's also a great choice for sharing with a group, as the ceviche trio offers three-in-one and ceviche quatro offers a choice of four. Alternatively, with a jug of Sangria and an order of ceviche mixto of white fish, shrimp, calamari, scallop, cilantro, onion, rocoto, cancha and sweet potato, you cannot go wrong.

Right on Market Street between Valencia and Guerrero streets, adjoining its sister Pisco Lounge next door, you can go from get educated by the bartender on a pisco flight and then go from bar to table for a fully Peruvian experience. Have ceviche as a bar bite or at your dinner table at Destino. Three cerviches are on the menu: Mixto with Australian butterfish, Peruana with hamachi and Maracuya, the latter prepared with Ecuadorian corvina and sweet tomatoes. Plantain chips are a popular side with the ceviche.

Related: A NIght Out In Union Square
Laurie Jo Miller Farr loves walkable cities. A tourism industry professional and transplanted New Yorker by way of half-a-lifetime in London, she's writing about the best of the bay and beyond for Yahoo, USA Today, eHow, and on Examiner.com.