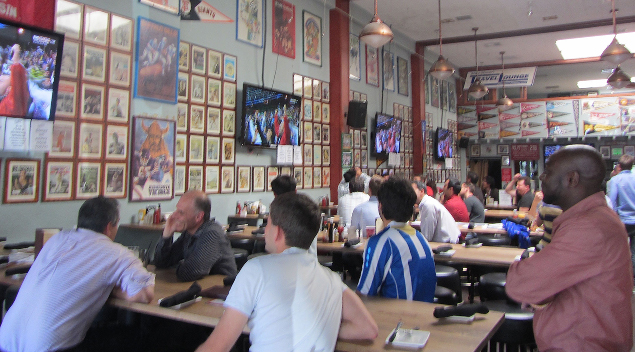 For many Bay Area fans of the San Francisco Giants and the Oakland Athletics, the 2015 baseball season can't come soon enough. Fresh off their third World Series championship in five years, the Giants are ready to defend their title and it doesn't matter if it's an odd year or not. Over in the East Bay, the Oakland A's is a perennial contender and this year is no different, even after adding six new players while trading some of their most popular players. If you can't make it to one of the home games, the next best thing is to watch the game with your friends or loved ones at one of the many sports bars in the Bay Area. While every local fan has his favorite watering hole, here is a look at five of the best baseball bars in the Bay Area.

The Old Pro has repeatedly been named as the Best Sports Bar in Palo Alto and the Best Peninsula Sports Bar. The downtown Palo Alto establishment serves 12 draft beers and six types of bottled beers, including Corona, Amstel Light and Heineken, along with specialty cocktails and wine by the glass or bottle. The Old Pro serves up traditional bar food, including sliders, tacos and chicken wings. There is plenty of seating available for a large crowd, with several TVs for A's and Giants games. In between innings, first-time visitors may want to try their luck on the mechanical bull.

With more than 20 TVs and cheap beer, Greens gets pretty crowded during the NFL season. But even during the MLB season, things can get a little hectic, especially if there is a big Giants game being televised. Several varieties of beer are on tap and a Budweiser goes for $3 and a bucket of six Bud bottles goes for $18. No food is served at this classic sports bar but past guests say you can bring your own in and the local favorite Nick's Crispy Tacos is just a short walk away.

This neighborhood sports bar in the heart of the Mission District is consistently mentioned as one of the best Irish bars in the city. Whenever the San Francisco Giants have a game televised, you can expect to see the action on most, if not all of the nine large HD flat screen TVs. The Phoenix has an extensive beer menu, with 18 draft beers sold in 20-oz pints and 18 types of bottled beers. The food menu is equally impressive, serving great dishes like Phoenix Sliders, Irish B.L.T. with Avocado, Shepherd's Pie and Bangers and Mash.

Once ranked the second best sports bar in the entire country, Ricky's is sports central for Oakland Raiders fans. But since the Raiders share the same stadium as the As, it's also a haven for baseball fans once the MLB season begins. In business since 1946, the family-operated business has more than 100 HDTVs including a few in the restrooms. Many of the dishes from the food menu honor several legendary Oakland Raiders, such as the Phil Villapiano's Spaghetti Bowl, Otis Sistrunk's Fish and Chips, Ray Chester's Grilled Crab Sandwich and the Willie Brown sandwich.

Related: The Best Places To Watch Each Pro Football Team In San Francisco
Randy Yagi is a freelance writer covering all things San Francisco. In 2012, he was awarded a Media Fellowship from Stanford University. His work can be found on Examiner.com Examiner.com.