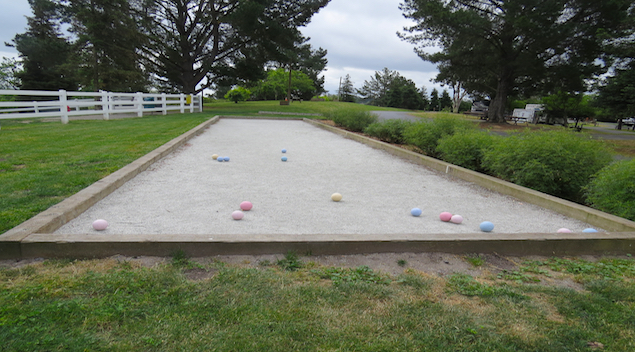 With summer just around the corner and the prospects of warmer weather, you can expect to see more lawn games being played throughout San Francisco. This also includes many of the city's most popular bars, allowing you to have a drink or two with your friends while enjoying the outdoor game of your choice. The following are five of the best bars in San Francisco featuring popular lawn games.

Regarded as one of the best wine bars in America, the Hidden Vine features a world-class wine list and an even more hidden bocce ball court. Tucked away on a slightly hidden, single block street in the Financial District, the acclaimed wine bar offers an extensive wine list of well over 180 different wines primarily from the California Wine Country and Europe with 40 distinctive selections available by glass. Typical use of the high-end bocce court with artificial grass is one hour and requires a $100 food and beverage minimum for groups up to 12 guests. Larger parties or parties requiring multiple hours are advised book a reservation online. Named by both Gayot and Travel+Leisure as one of the best wine bars in the country, the Hidden Vine is located a few blocks from the Transamerica Pyramid off lively Battery Street.

Well known for its bottomless mimosas and an engaging indoor bocce ball court, Stock in Trade is a popular sports bar located on the southern edge of the Marina District. Opened just a few years ago in the former La Barca, the San Francisco tavern features an impressive U-shaped bar and a revamped food and drink menu, along with the bocce ball court adjacent to the spacious dining area. The bocce ball court usually stays open until 2 a.m. and is available on a first-come first-serve basis with other interested bar patrons added to a waiting list. Because of the close proximity to the dining area, bar patrons must be mindful of other guests seated in the dining area. In addition to its popular mimosas, the sports bar offers several beers on tap and by bottle, a collection of premium wines and an assortment of crafted cocktails.

Of all the great spots in the city to play the game of cornhole, the best might just be at Teeth SF. A neighborhood bar in the Mission District originally named after the Muppet Show rock band Dr. Teeth and the Electric Mayhem, Teeth SF routinely draws a good crowd and especially on Wednesdays when chicken wings are just 25 cents with a two drink minimum. Out in back is a spacious patio with picnic tables and what appears to be a regulation size cornhole court with two pitcher's boxes. Just recently, Teeth hosted a cornhole tournament to celebrate the launch of Boulevard Brewing Company's Ginger Lemon Radler on draft. Teeth SF sells all sorts of great bar food, such as sliders, burgers and sandwiches and has a full bar featuring several top shelf cocktails, beer and fine wines.

Street soccer is far from being a typical lawn game found in local watering holes. But The Yard at Mission Rock is no ordinary spot for drinks and a few laughs. Instead, this trendy hotspot anchored by a pop-up shipping container is equal parts craft brewhouse, fast casual creperie and premium burger joint and two larger parts of street soccer fields for league and tournament play and special events. With gorgeous views of AT&T Park just across from McCovey Cove, The Yard at Mission Rock is a unique destination for food, drink and outdoor activities, and is a very popular gathering place before San Francisco Giants home games. In addition to the two Street Soccer USA fields replete with custom artificial turf, San Francisco's own Anchor Brewing operates a beer garden here complete with a cornhole court, as well as two newcomers - Belcampo restaurant and Crêperie Saint-Germain.

One of the most unique places to play bocce ball in San Francisco is on an island that didn't exist until the 1930s. With spectacular of the city skyline, Treasure Island is an artificial island created as part of the 1939 Golden Gate International Exposition and after more than 50 years as a naval base, now hosts a number of businesses, including restaurants and wineries. Three of the wineries are housed within Winemaker Studios – Sol Rouge Winery, Sottomarino Winery and Vie Winery – and collectively share a couple of bocce ball courts that can be reserved online. Because each of the world class wine tasting rooms offers its own collection of California or Italian varietals, visitors should plan on staying a few hours, especially since, unlike in the city, there is plenty of free parking available except when special events are being held.

Related: Best Irish Bars In The Bay Area
Randy Yagi is an award-winning freelance writer covering all things San Francisco. In 2012, he received a Media Fellowship from Stanford University. His work can be found on Examiner.com