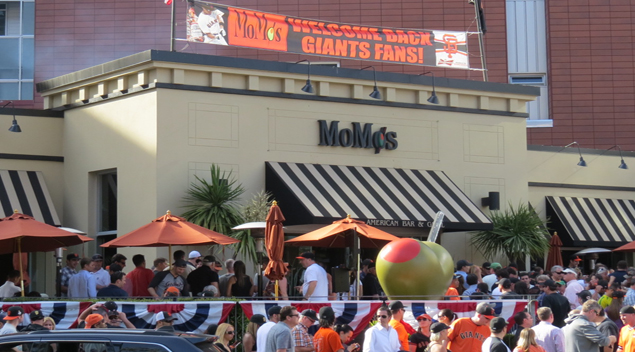 The pro football season has long been over so are you ready for some baseball? The San Francisco Giants begin their quest for another World Series championship at their home opener on April 10th against the Arizona Diamondbacks. But if you weren't able to get a ticket to the game, what bars are nearby where you can you and watch all of the televised action? Here is a look at five bars to be at near AT&T Park to take-in on Opening Day.

The Yard at Mission Rock has become one of the hottest spots for food, drink and to simply have fun. Located across McCovey Cove on 3rd and Terry A Francois Blvd, The Yard boasts a one-of-a-kind gathering spot close to AT&T Park. You can find an all-new mini soccer field at The Yard. Perfect for groups young and old to gather. Of course, you will find Anchor Brewing and Crêperie Saint-Germain sharing a 32-seat area to try out their craft beers or take in some the available culinary delights. You can also grab something quick to eat at Belcampo or nearby at the local food truck area. The Yard is open 7 days a week and plenty of parking is available at Lot A.

MoMo's is one of the hot spots to check out before, during and after Giants games at AT&T Park. Located directly across the street from the ballpark, the restaurant named after the owner's grandmother attracts such a large crowd before and after games, scores of Giants fans are spilled out onto the sidewalk just trying to be close to the festivities. MoMo's has an upscale food menu and impressive wine list, along with several draft and bottled beers, along with crafted cocktails. Because most of the patrons are game day ticket holders, the crowd thins out once the game starts, allowing more space to watch the live action on the TVs or listen to the crowd roar from inside the ballpark. After home ballgames, it's not surprising to see some current or former Giants players mingling in with the crowd at MoMo's.

Not to be mistaken with the historic New York restaurant and bar, Pete's Tavern has a reputation of being the best sports bar in the city. Like MoMo's, it's across the street from AT&T Park and even though capacity is around 1,000, Pete's has people lined up outside, waiting to get in. With a ton of space and 22 flat screen TVs, Pete's lives up to its reputation as San Francisco's best sports bar and a great spot to enjoy watching the game. Pete's Tavern has a great food and drink menu, serving outstanding bar food along with beer, fine wines and specialty cocktails. Another hot spot to check out is Pedro's Cantina, which shares the same building, address and owners.

Rumors has only been open for several years but quickly gained a reputation as one of the best sports bars near AT&T Park. With several TVs lining the walls, this neighborhood sports bar is a highly rated spot to grab a beer and some tasty pub grub. Home games aren't likely to have a lull during the game but visitors can still play a game of pool, shoot darts or just hang out and talk about why the Giants can win back to back World Series championships. Located near the intersection of 7th and Harrison streets, Rumors is far enough to be away from AT&T Park's heavy traffic but close enough to possibly hear the ballpark's iconic foghorn.

Frequently mentioned among the best sports bars in San Francisco, Ted's is known for great service and bar food. This very popular dive bar has several TVs to watch televised games from AT&T Park while enjoying a drink or more. The food menu features plenty of great bar food but some past guests says the spicy chicken wings are particularly good, occasionally cited as the best in the city. A like number of guests also say that Ted the owner is a big reason why his sports bar is lauded as among the best in the city.