SAN FRANCISCO (CBS SF) -- Waves of showers continued to roll through the San Francisco Bay Area early Thursday, bringing much needed relief to the drought-stricken region, but also elevating fears that trees weakened during the extend dry spell could topple amid mounting winds over the weekend.

Most of the Bay Area awoke Thursday to light showers or drizzle -- a brief respite before a stronger weather front arrives early Friday.

The main event was the expected to arrive on Sunday night -- an atmospheric river stretching well out into the Pacific and fueling up on tropical moisture from Hawaii. Forecasters said the plume of moisture could dump 5 inches or more of rain.

"There are two main rain events coming our way," said KPIX 5 meteorologist Darren Peck. "Friday morning and Sunday throughout the day. While Friday will impact the morning commute with up to a half and inch of rain coming Bay Area wide, Sunday's storm will be the main headline in terms of rain intensity, duration and wind."

"Sunday's rain will bring our first significant atmospheric river of the season," he continued. "As with most atmospheric rivers, wind will accompany the heaviest of the rain as well with gusts up to 25 mph throughout the day on Sunday." 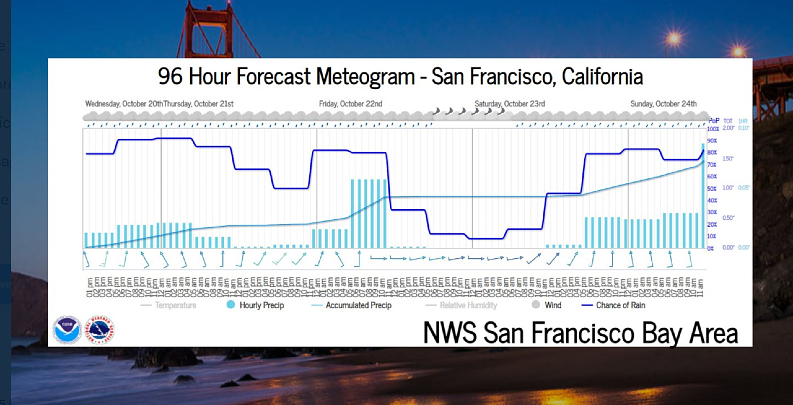 The weather onslaught this week has already begun impacting trees weakened by months of drought. A massive tree toppled over early Thursday on Sutter near Webster in San Francisco. It ripped up the sidewalk, crashed onto a parked car and tore down utility lines. 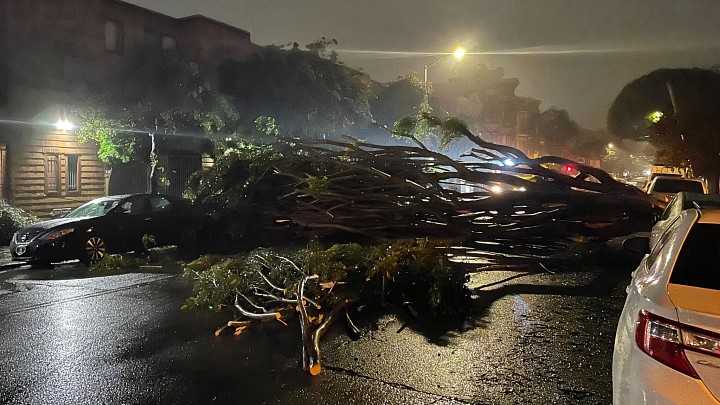 "With the drought, we'll be watching the winds carefully because we know our trees are drought stressed," she said.

While all eyes were on Sunday, the National Weather Service said not to discount Friday's storm. The morning commute was treacherous due to rain-slickened roadways.

"We are expecting to see an additional 1-3 inches of rainfall through Friday across the North Bay Mountains with amounts tapering down to around 0.75 of an inch in the region`s valleys," the weather service said. "Meanwhile, 0.10 to half an inch was expected elsewhere across the region."

Temperatures were also expected to plunge in the Sierra, turning showers into blizzard conditions.

"As the system evolves and becomes colder, we`re talking about feet of heavy, wet snow in the high Sierra," said forecasters at the weather service's Reno office. "The Tahoe Basin could receive about 2-3 plus feet of snow -- Sierra cement at its best."

The heavy snows allowed Mammoth Mountain to announce Thursday an early start to the Sierra ski season. Select runs will open for the 2021/22 on October 29, two weeks earlier than the scheduled.