The heavy concentration of rain on the southern part of the Bay Area has led to authorities issuing multiple flood watches and warnings.

Early Monday evening, Santa Cruz County announced that areas of the CZU burn scar, Felton Grove and Paradise Park were under an evacuation warning due to the heavy rains that started falling Sunday.

Residents who evacuate are asked to follow these steps:

Residents can check if their in the evacuation warning area via the Zonehaven.com website.

The National Weather Service earlier issued a Flash Flood Watch for the CZU Lightning Complex burn area covering the southern portion of San Mateo County and the northern part of Santa Cruz County. The watch went into effect at 4 p.m. Monday and is set to expire at 10 p.m. 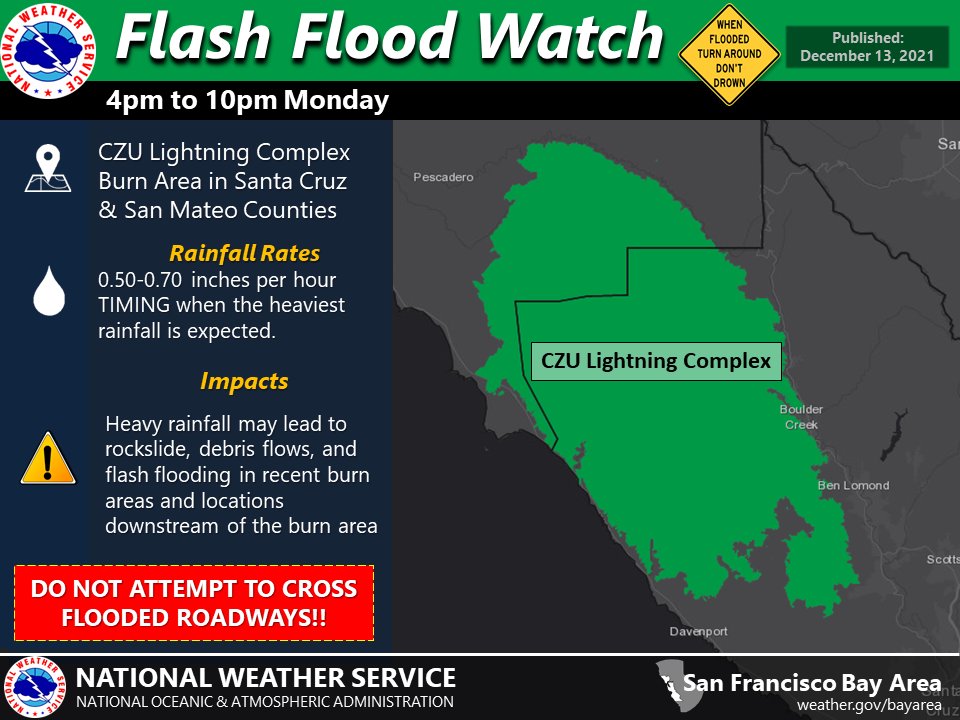 An earlier flash flooding warning was issued for the CZU Lightning Complex burn area in San Mateo County at 10:51 a.m.

The flash flood warning expired at 11:45 a.m. and was downgraded to a flood advisory. An additional flood advisory that had been issued for a wider part of the region including San Francisco, San Mateo, Santa Clara and Santa Cruz counties expired at 12:15 p.m.

San Lorenzo River levels are up and the fast moving flows are carrying big logs and debris that haven't been swept up by runoff for years.

It was an impressive show, even for the locals.

Randall came out to see the river after her own house got flooded. Runoff behind her house overwhelmed the culverts and flowed into the family
kitchen a few inches deep.

"It was like a flash flood like everyone was worried about just coming through. Such a great amount of water in such a short period of time," said Matt Randall.

The storm made driving especially treacherous. There was flooding on Highway 9 in numerous spots as storm runoff overflowed ditches.

"It really came down hard. It flooded the road and came down into our property," said Boulder Creek resident Harry Clark.

Road crews were hopping from place to place, clearing the storm drains.
There was also a series of mudslides. One closed a lane of Southbound 17 near Sugarloaf Road.

But some residents weren't too surprised by the extended downpour brought by the atmospheric river.

"It's a good storm, but it's not that unusual for up here in the mountains," said Boulder Creek resident Troyan Lean.

The weather service said the watch would be in effect from 7 p.m. Monday evening until 1 a.m. Tuesday morning in the burn scars for the River, Carmel, Dolan and Coleman Fires.

Monterey County authorities previously issued an evacuation warning around 5 p.m. Sunday for the Dolan Fire burn scar area and areas in and around River Road in Salinas until Tuesday morning, as Sunday's atmospheric river storm system dumped heavy rain in the county.

Forecasters said rainfall will likely meet thresholds for increased risk of debris flow activity, especially in areas near the fires of Aug. 2020. Properties and people located below or downstream of the burn areas are at an increased risk.

The closure is expected to remain in effect until Tuesday, when the transit agency will assess the conditions.

Caltrans said it's working with local agencies to minimize travel into Big Sur to allow residents and businesses to evacuate in the safest conditions possible. The closure of Highway 1 comes at the request of the California Highway Patrol.

Flooding forced the closure of Highway 92 between Highway 1 and State Route 35 in both directions.

Cal Fire later confirmed that two people trapped in floodwaters in their vehicle on Highway 92 had to be rescued, but there were no injuries in the incident.

Elsewhere in San Mateo County, a massive scaffolding tumbled onto southbound El Camino Real forcing closure from 3rd Avenue to 5th Avenue. No injuries were reported and there was no ETA on when the lanes would be open. 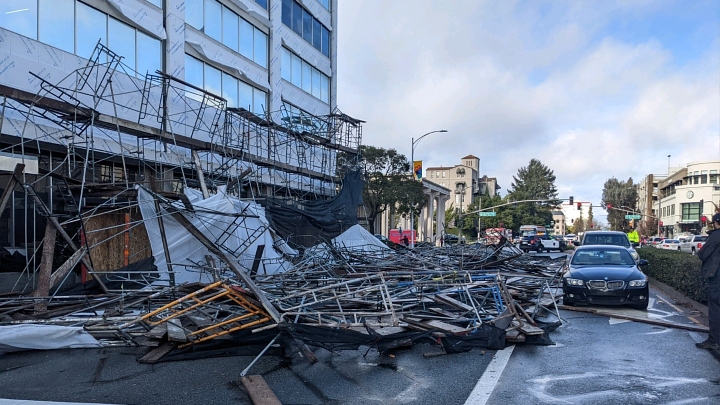 Firefighters also provided assistance at the Half Moon Bay branch of the San Mateo Credit Union that flooded. Firefighters used sandbags to control the inflow of water and helped clear out the water that had pooled.

Meanwhile in Hillsborough, crews from the San Mateo Consolidated Fire Department and Central County Fire District rescued one resident from their home due to flooding.

Hillsborough police said there was significant localized flooding within the city. Emergency crews were working throughout to mitigate the flooding and remove hazardous debris.

In the South Bay, Mountain View police reported at around 1:30 p.m. that a fallen power pole had fallen at Rengstorff Avenue near the intersection with San Luis Avenue. PG&E crews were at the scene.

So far, there was no projection as to when the roadway would reopen.

As of shortly before 3 p.m., Mountain View police were still providing traffic control in the area. Some 4,000 PG&E customers were without power.

Cal Fire reported that a small mudslide had temporarily closed a portion of Felton Empire Road Monday morning. No injuries were reported and crews had one lane open.

The deluge triggered a flood advisory of Monday morning for a portions of Alameda, Contra Costa, San Mateo and Santa Clara counties.

At 8:53 a.m., the weather service tweeted: "We are closely monitoring area streams and creeks, as several across the North Bay are rising quickly. Here is a quick snap shot of Napa Creek, Corte Madera Creek, and Santa Rosa Creek."

A wind advisory was also in effect with gusts as high as 50 mph.

Berkeley police warned motorists that "westbound Ashby Avenue west of 7th Street will be closed for the next several days due to flooding. Please avoid the area."

There were also several reports of between 6 inches to a foot of rain pooled on streets in Piedmont. In Santa Clara, a fallen tree had toppled across a roadway in Santa Clara and another tree crashed into a bedroom of a home in Felton in the rain-soaked Santa Cruz Mountains.

In Orinda, there was flooding reported at Moraga Way and Glorietta Blvd.

The storm's most potent punch had been delivered in the North Bay starting Sunday afternoon.