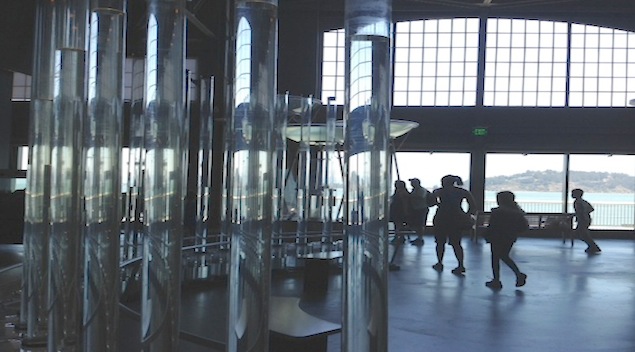 It's a great day when a child invites their grownup to explore San Francisco together; begin your planning with a look at the San Francisco Travel website. The city's official tourism association is chock-a-block with so many kid-friendly things to do that even the most energetic of kids can't get through the list in a day (or a week). Narrow in on a new neighborhood, pick a park, attend an attraction or take a tour. Laurie Armstrong talks to us about some of the city's delightful, highly entertaining diversions that definitely get the kid stamp of approval.

With so many scoring a perfect 10, it's a challenge to choose. On the waterfront, Exploratorium is triple its former size, where six galleries stimulate the senses to a new way of learning through doing. In Golden Gate Park, explore the rainforest or outer space; great multi-generational experiences are found throughout the California Academy of Sciences. More animal encounters await on the Great Highway at San Francisco Zoo, open 365 days a year, where nature-focused learning about conservation introduces all-important insights. Over at the Presidio, "Kids are often surprised to find out that Walt Disney was a real person," says Armstrong, suggesting his genius is a winner at the Walt Disney Family Museum. Armstrong also points out that "the ever-popular Alcatraz audio and park ranger tour is a perfect choice on less crowded weekdays."

Getting there is half the fun when you hop on a cable car ($6) to get to the excellent free Cable Car Museum or ride a historic streetcar ($.75 for ages 5-17 with ID) to the free Musée Mecanique at Fisherman's Wharf. At San Francisco Travel, the list of "9 Things For Less Than $9" is so popular that Armstrong says they've doubled it to "9 (More) Things For Less Than $9." Breathe in the salty air at Lands End by the Sutro Bath ruins. Or board a free PresidiGo shuttle from downtown to the eucalyptus groves at the Presidio, where the newly restored Officers' Club and Heritage Gallery are free. Kids can get their hands into a project at Corona Heights' free Randall Museum. Bigger kids can tackle the stairs up Telegraph Hill to seek out wild parrots, a cool view and a blast from the past in painted murals on the newly restored walls of Coit Tower.

Go For a Walk

Grab a jacket and join visitors from all over the world who make a point of walking across the Golden Gate Bridge. Get even more out of your up-close encounter with International Orange by joining a Thursday morning free guided tour from San Francisco City Guides. If Thursday isn't convenient, you can learn about the events of April 18, 1906 every Monday morning, get inside access to City Hall on a Tuesday, explore Gold Rush Days on a Wednesday or climb the Japanese Tea Garden's Moon Bridge and Stow Lake's island on a Friday. "Some of these fabulous guided walks are perfect for tweens," says Armstrong. Tours take place rain or shine, no reservations needed, and they're free, but certainly welcome donations for the nonprofit group partnered with San Francisco Parks Alliance.

Related: Best Art Exhibits For Kids In The Bay Area
Have a Whirl

If the younger set is in tow, remember that inside these seven-by-seven square miles that span the 'bay to breakers' are restored gems. Four antique carousels spin around at the Children's Creativity Museum (hand carved horses) at Yerba Buena Gardens, at the children's playground in Golden Gate Park (62 frogs, dogs, roosters and pigs), a double-decker extravaganza at Pier 39 (1,800 lights and sea lions, dolphins and sea dragons to ride) and at San Francisco Zoo, where a menagerie of 50 animals await their passengers. Three more attention-grabbing carousels are sprinkled around the East Bay at Tilden Park, Oakland Zoo and at Children's Fairyland in Oakland.

Inside one of the largest urban parks in America, fragrant discoveries unfold season after season. Bring the children to study the language of flowers at Golden Gate Park's historic Conservatory of Flowers, filled with palms, rare and exotic flowers since 1878. Continue on to the Garden of Shakespeare's Flowers, Rose Garden, Botanical Garden, Queen Wilhelmina Tulip Garden under the windmill or the Dahlia Dell, which Armstrong notes is the official flower of San Francisco. Lily pads and a resident frog or two reside in the small fountain in front of the de Young Museum, where an elevator ride to the free Hamon Observation Tower lays out a panorama of the park and the city. Don't overlook the Osher Sculpture Garden, where whimsical outdoor pieces such as a giant diaper pin and bright red apples are displayed on a free-to-run-around-on lawn beside the café. And all that's before Armstrong points out that the centennial of the beloved Palace of Fine Arts with its picturesque lagoon in the Marina is celebrated in 2015.