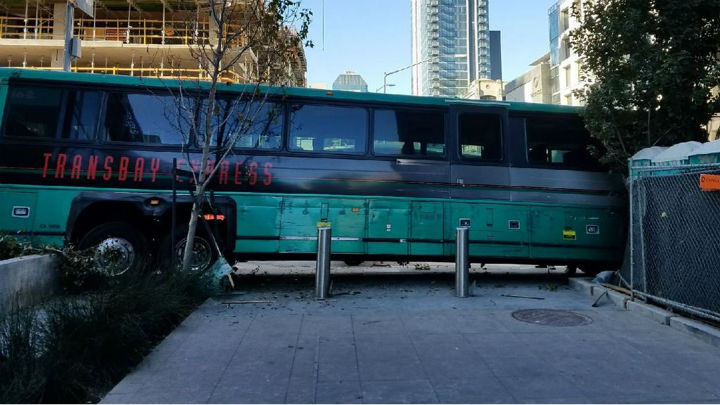 A bus traveling north on Fremont near Folsom collided with several vehicles, including another bus, then went onto the sidewalk and struck the scaffolding of a building, Rueca said.

The bus came to a stop on the 200 block of Fremont. He said the bus did not strike anyone on the sidewalk.

AC Transit officials said the two buses exited I-80 onto Fremont Street. One attempted to make a right turn onto Folsom Street. The second bus behind it should have been attempting to make the same turn, but lost control.

A total of five people were sent to area hospitals near the crash, including the drivers of both buses, a bus passenger and a passenger in a private vehicle, according to AC Transit spokesman Robert Lyles.

One of the five people appears to have taken themselves to the hospital at some point after the collision, Lyles said.

He also noted that neither driver has ever had any major issues.

"Each of the operators are experienced and have been with AC transit for a number of years," explained Lyles. "There's no indication there's any problem with any of the operators."

Video of the scene showed an AC Transit bus on the sidewalk, at least one light pole on the ground and a tree knocked over in the South of Market neighborhood. The front of the bus had crashed into a building under construction.

Danielle Marquis was on her way to work at a nearby dental office when she saw a bus careening down Fremont Street, striking other cars and another AC Transit bus before coming to rest on the sidewalk.

Without thinking, Marquis boarded the bus to see if the driver was okay.

"I wanted to keep her alert, conscious. Make sure she didn't pass out. She did great," said Marquis.

She said it was clear something went wrong before the crash.

"Very clear she lost consciousness. Also based on what other passengers said as they left the bus," explained Marquis. "As soon as the bus stopped everybody jumped out the windows"

Chad Preston was on a job site across the street. He and other construction workers helped Marquis keep the driver conscious while waiting for medical attention.

A few other construction workers said they were lucky to be able to get out of harms way before the bus hit.

"My friend here saw the bus coming when we were underneath the scaffolding," said construction worker Don Lipary. "He said, 'What the hell?!' And I just started running."

Lipary said the bus was "going 40 mph when it went on the sidewalk."

Police said the scaffolding the bus crashed into is still something authorities were worried about.

"Its definitely a concern. We must talk to the building engineers to see how it's affecting the scaffolding," said Rueca.

The crash closed the Fremont/Folsom Street and Harrison Street off-ramps from Interstate Highway 80, but both have since reopened, Rueca said.

As of around 4 p.m., the only remaining street closure was on the section of Fremont Street between Folsom and Howard streets, where crews were still working to remove the bus that crashed, Rueca said.

The cause of the crash remains under investigation.

Lyles said AC Transit has collected video from the involved buses and is checking to see if any San Francisco city buses in the area have video that might be helpful.

"We're very grateful that the injuries were limited, and that there weren't more bystanders or pedestrians involved in this," Lyles said. "We are investing considerable energy and effort into trying to ascertain exactly what happened."

Lyles said that Fremont Street was cleared fairly quickly and buses on the popular Transbay bus line were able to regain access to the San Francisco terminal by around 1 p.m.