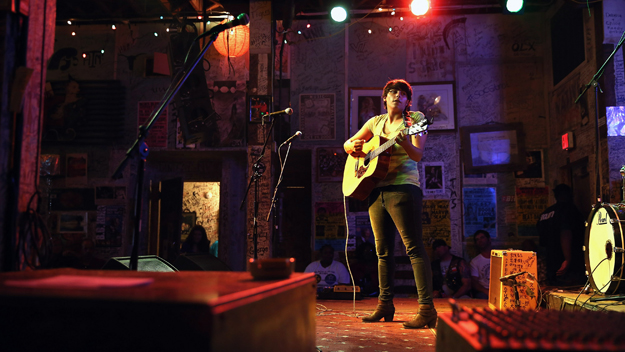 No other region in the country has contributed more to the development of American music than the South. The music genres of jazz, rock and roll, the blues and country western all have Southern roots whose influence and popularity has spread all over the world. In celebration of these important music genres and other American music such as gospel, bluegrass and Cajun-Zydeco, the Americana Music Triangle, a project created over the past three years by music historians and music lovers, was formally launched in May. Extending from Tennessee to the north and Louisiana to the south, the Americana Music Triangle features more than 30 cities in five states and is touted as the "world's number one music destination." Here's a quick look at five of the most important cities within the Triangle for music lovers to visit and suggested places to see.

Clarksdale is just one of many important stops in Mississippi for music lovers. Located about 75 miles south of Memphis, the city is part of the region known as the Mississippi Delta, widely considered the "birthplace of the blues" and certainly the birthplace of one of its most significant sub-genres, the Delta Blues. Legendary blues musicians like Robert Johnson, Howlin' Wolf, Elmore James and Muddy Waters all have made immeasurable contributions to the blues and their most famous songs are still being performed worldwide. Clarksdale is also noteworthy for being the home of the Delta Blues Museum and as one of the cities along the historic Mississippi Blues Trail. Other important cities along this trail are Greenville, Hazlehurst, the birthplace of Robert Johnson, and Tupelo, birthplace of Elvis Presley.

Two of the four cities comprising "The Shoals" might not seem instantly recognizable to music fans, but its influence in American music history is unquestionable. Florence is the birthplace of W.C. Handy, widely acknowledged as the "Father of the Blues" and credited for spreading the popularity of blues music in the early 20th century with landmark songs like "Memphis Blues," "Beale Street Blues" and "St. Louis Blues." Just recently, Florence hosted its annual W.C. Handy Music Festival, in honor of one of the city's most beloved native sons, and a similar event was held in Henderson, Kentucky. Neighboring Muscle Shoals, known as the "recording capital of the world," is also of special interest for music lovers. Beginning in the 1960s, recording studios in Muscle Shoals gained worldwide attention for hosting an impressive collection of the world-class music artists. Among them were the Rolling Stones, Paul Simon, Rod Stewart, Bob Dylan and the Black Keys. Tours of the most famous studios, FAME and 3614 Jackson Highway, are available to the public. One other noteworthy attraction in the The Shoals is the Alabama Music Hall of Fame in Tuscumbia, whose list of inductees include Percy Sledge, Hank Williams, Martha Reeves and Tammy Wynette.

Many of the biggest names in American music history got their start in Memphis, alternatively nicknamed the "Home of the Blues" and the "Birthplace of Rock 'n Roll." Additionally, while Detroit closely identifies with soul music, Memphis also played a significant role in the development of that music genre, which peaked in the 1960s. Soul icons Aretha Franklin, Otis Redding, Wilson Pickett and many more gained national prominence in helping develop the Memphis Sound and one local attraction music lovers might enjoy is the Stax Museum of American Soul Music, the former location of the historic recording studio of the same name. But preceding the soul music era was the creation of rock and roll music in another local recording studio. Many music historians say the first rock and roll record was "Rocket 88" recorded in the city's Sun Studios in 1951, but others will argue it was Elvis Presley's first recording at the same studios — "That's All Right" in 1954, that's more deserving to be named the first true rock record. Presley's former home and his final resting place, Graceland, is one of the biggest attractions in Memphis, as is Sun Studio, dubbed the "birthplace of rock n' roll," and must-see Beale Street, featuring more than 25 blues clubs and described as the "official home of the blues." Graceland, Sun Studio and the Stax Museum recently appeared on a list of the 10 Best Music Attractions in the world, with Graceland appearing at No. 1.

Nashville is not just the capital of Tennessee, it's also home to the Ryman Auditorium, the world famous Grand Ole Opry and the Country Music Hall of Fame. But the origins of the city's appropriate nickname of "Music City" stretch much further than the mid-20th century and decades before the blues and jazz evolved. While the official nickname is widely credited to a local radio announcer during the 1950s, the term was first used to describe Nashville when the Fisk Jubilee Singers, an African-American singing ensemble representing the city's Fisk University, performed in Europe in 1870s, inspiring Queen Victoria of England to say "They must come from a music city." Years later, but before the end of the 19th century, Nashville's most famous music venue opened — the Ryman Auditorium, also known as the "Mother Church of Country Music" and the former home to the Grand Ole Opry. Now held in a much larger venue, the Grand Ole Opry first began as a radio show in 1925 and since then has helped elevate the music careers of many of the biggest names in country music, including Hank Williams, Patsy Cline and Marty Robbins and more recently, Reba McEntire, Dolly Parton, Garth Brooks and Brad Paisley have all performed at the Grand Ole Opry. Today, Nashville hosts more than 150 live music venues, including several along the city's famous Honky Tonk Row, named after one of the city's most popular music genres.

If music lovers only have time to visit just a few cities within the Americana Music Triangle, New Orleans, the birthplace of jazz, should top the list. Derived from classical music, some of the earliest forms of American music such as popular, blues, folk music and jazz originated within the historic Congo Square, located in what is now Louis Armstrong Park bordering the French Quarter. Today, New Orleans is one of the world's premiere destinations for live music, with many of the city's best venues located within the French Quarter, including Maison Bourbon Jazz Club, Fritzel's European Jazz Pub and the venerable Preservation Hall. But other prominent jazz clubs can be found in other parts of the Crescent City, such as the Maple Leaf Bar near Tulane University, Tipitina's in Uptown (with a second location in the French Quarter) and the Rock 'n' Bowl in Mid-City. To complete a music lover's tour, visitors should also make time to visit Frenchman Street, described as the "heartbeat and center of food, music and art in New Orleans".