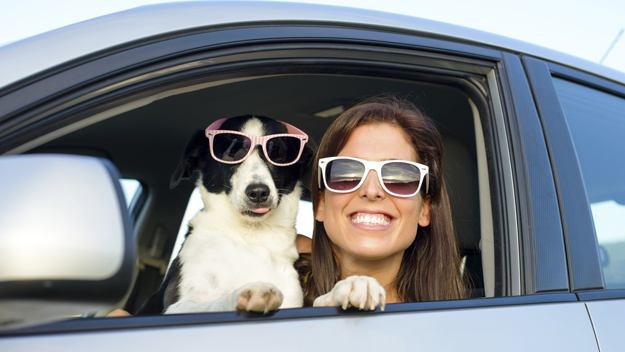 May is National Pet Month, so if you really needed an excuse to take a trip with your dog, here's your opportunity. Not only is an excursion a great way to solidify the bond and pamper your furry friend, it's also a great way to honor man's indisputable best friend. As luck would have it, there are several pet-friendly destinations across the country that have the welcome mat out for folks just like you. If you're looking for ideas, here is just a small sample of the best trips in America to take with your dog.

Florida is blessed with several dog-friendly destinations, such as Fort De Soto Paw Playground and Beach in Saint Petersburg, Gulfside Beach in Sanibel and Bonita Beach Dog Park in Fort Myers. But the best seaside destination for visitors and their pets is Miami Beach. Even some of Miami Beach's most famous hotels are pet friendly, including Loews Miami Beach Hotel and the fabulous Fontainebleau Miami Beach. Since most dogs love playing on the beach, pet owners will enjoy visiting places like Haulover Beach Park and Bark Beach at North Shore Open Space Park, voted the best dog park in the Greater Miami area. There are also some off-leash dog parks like Belle Isle Dog Park and Washington Avenue Bark Park. But owners must remember to keep their pets hydrated, especially in warm weather.

Related: Best Travel Destinations For You And Your Pet

New Orleans has several dog-friendly hotels, including some of the best known properties in the French Quarter. Among the most famous pet-friendly hotels in the city's oldest neighborhood are the Royal Sonesta Hotel, Hotel Monteleone, Windsor Court Hotel and the Sheraton New Orleans Hotel. In all, more than 50 pet-friendly properties can be found in the Crescent City, including bed and breakfasts and vacation rentals. In addition to a chance to walk along the Mississippi River and share a beignet in Jackson Square, there are a handful of outstanding off leash parks, such as the 1,300-acre City Park and the appropriately named NOLA City Bark.

With more dog parks per capita in the country, the breathtaking City of Roses is likely the most pet-friendly city in America. If that's not convincing enough, there are more than 1,000 pet-friendly overnight accommodations and Portland is one of the few destinations outside of France where you can bring your dog into a pub. Among Portland's superior collection of dog-friendly attractions are the literally named Thousand Acres, where dogs can play in the Sandy River Delta and Sellwood Riverfront Park, featuring a 1.5-acre off leash area along the Willamette River. Recommended pet friendly spots for lodging include Riverplace Hotel, Red Lion Hotel on the River, Westin Portland and Vintage Plaza Hotel.

The amazing City By The Bay is very pet friendly, as evidenced by off-leash places with breathtaking views like Baker Beach and Crissy Field. Commensurate with any of the best pet-friendly destinations, San Francisco has a wealth of overnight accommodations, from budget properties to upscale hotels like the Argonaut Hotel, Inn at the Presidio and even the Sir Francis Drake Hotel in Union Square. In all, there are a handful of friendly beaches in San Francisco with other notable destinations like Lands End Off Leash Dog Area and Fort Funston Doggie Beach. And if you want to enjoy spectacular views of Alcatraz Island and the San Francisco skyline, you're allowed to bring your furry friend along on bay cruises provided by the Blue and Gold Fleet. Among the other pet-friendly destinations near San Francisco are the 23-acre Point Isabel Regional Shoreline, Point Reyes National Seashore, Muir Beach and Stinson Beach.

Seattle doesn't have nearly as many dog parks as Portland, but this enchanting Pacific Northwest city boasts more dogs than children. Everywhere you turn, you'll find dogs playing in the many popular dog parks throughout the city. The nine acre Magnuson Dog Park, for instance, is often cited among the best dog parks in the country. Some of the best hotels in the city are among more than 70 pet-friendly listings, such as the Sorrento Hotel, Westin Seattle, The Edgewater and Hotel Monaco. Other Seattle attractions that are very pet friendly like a private picnic with Northwest Floatplane Picnics and stand up Paddleboarding or kayaking from Northwest Outdoor Center.

Related: Best Pet-Friendly Hotels In San Francisco
Randy Yagi is a freelance writer covering all things San Francisco. In 2012, he was awarded a Media Fellowship from Stanford University. His work can be found on Examiner.com Examiner.com.