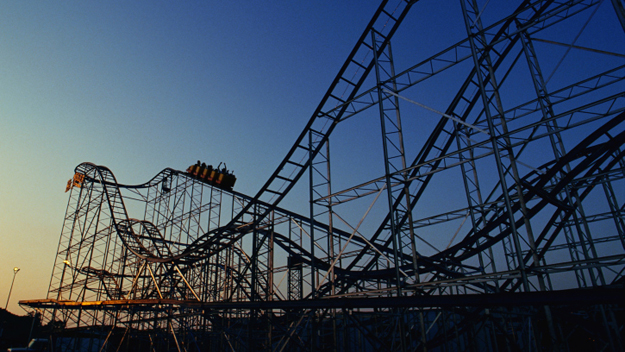 Several amazing new roller coasters are expected to open to the public this year, including Dollywood's Lightning Rod and The Joker at Six Flags Discovery Kingdom. But many thrill ride enthusiasts, especially those who insist on sitting in the very front, are also awaiting the arrival of what's expected to be a much bigger attraction in 2017. Expected to open next year at Skyplex in Orlando, Skyscraper should shatter the record as the tallest roller coaster in the world with an estimated height of more than 500 feet. While 2017 still seems so far away, thrill ride fans can still marvel at the newest additions, as well as the other phenomenal roller coasters across the country. The following are the current tallest roller coasters in the United States to help you prepare to take on the Skyscraper.

Located at the "Roller Coaster Capital of the World," Top Thrill Dragster was the world's tallest roller coaster for two years before being surpassed by Kingda Ka. But at 420 feet tall, this steel accelerator roller coaster is no less a thrill to experience, reaching a maximum speed of 120 mph in 3.8 seconds while mimicking its dragster reputation before twisting and ascending up its stomach-churning 90-degree incline, then accelerating downwards in a 270 degree twist before leveling out. Despite its lofty status as the world's second tallest coaster, Top Thrill Dragster might not even be Cedar Point's best roller coaster, since Millennium Force and Maverick often appear on rider reviews as among the world's best. Situated in northern Ohio along the breathtaking shores of Lake Erie, Cedar Point has a world record 72 rides, including 16 roller coasters. This year, the theme park is expected to introduce its newest roller coaster, the 223-foot-tall Valravn, billed as the world's tallest, fastest and longest dive coaster. First opened in 1870, Cedar Point is the second-oldest operating amusement park in the country.

At 456 feet, Kingda Ka is currently the tallest roller coaster in the world and fastest in North America. Clearly not for the faint of heart, the steel accelerator coaster that first opened in 2005 reaches a sizzling top speed of 128 mph in a mere 3.5 seconds as it soars skyward towards its breathtaking apex, then plunges 418 feet in a 270-degree spiral down the inverted U-shaped track. Following the record-setting drop, the coaster takes its rider across a 129-foot camel hump before completing its journey back to the boarding area. Attached to the roller coaster, also known as "The King," is Zumanjaro: Drop of Doom, the world's tallest drop tower at 415 feet high. Located 22 miles east of the New Jersey capital city of Trenton, Six Flags Great Adventure has 12 other coasters and 52 other attractions, as well as Safari Off Road Adventure, a wildlife park that's also part of the paid admission to the popular theme park.

Accelerating at a speed of up to 104 mph, this 415-foot steel shuttle roller coaster opened in 1997 and was the world's tallest for just over six years. Despite its current third place ranking, Superman: Escape from Krypton remains the tallest and fastest coaster in California and the first ever in the world to reach 100 mph. After undergoing a major upgrade in 2011, this thrill ride now features seats facing backwards as the coaster soars vertically at 90 degrees, then returns towards terra firma at 92 mph. Easily outdistancing puny offerings from other Southern California amusement parks such as Disneyland and Universal Studios Hollywood, Six Flags Magic Mountain boasts more than 100 rides, games and attractions, including a world record 19 roller coasters.

Open for less than a year, Fury 325 is currently the tallest and fastest giga coaster in the world and fifth tallest overall. Equally as impressive is its current ranking at the top of the CoasterBuzz 100 and fourth in the top 10 Steel Roller Coasters of 2015 from the coveted  Golden Ticket Awards, known as the "Oscars of Roller Coasters." Fury 325 is further distinguished as being the longest steel roller coaster in North America, extending more than 1.25 miles with a maximum height of 325 feet and a top speed of 95 mph. But a more fascinating fact is that this unique coaster crosses the state lines of both North Carolina and South Carolina and into the respective communities of Charlotte and Fort Mill. This amazing roller coaster, taller than the Statue of Liberty, is located within the 398-acre Carowinds Amusement Park, which features a total of 64 rides including 12 other world-class roller coasters and the newly named Carolina Harbor — the largest water park in the Carolinas — scheduled to reopen this year.

For just a brief time, Millennium Force was dubbed the world's tallest and fastest roller coaster. Although this 310-foot tall giga coaster has since dropped out of the world's top five tallest, it's been ranked either the first or second ranked steel roller coaster at the Golden Ticket Awards ever since its unveiling in 2000 and has been impressively listed at the top for the past six consecutive years. So why has the world's first giga coaster been universally loved for so long? According to past riders, loyal roller coaster enthusiasts and panels of experts from across the nation, it's a combination of several factors, such as smoothness, thrills, speed, multiple drops and duration. Like the world's second tallest coaster, Top Thrill Dragster, Millennium Force is located in the 365-acre Cedar Point, with its spectacular views of Lake Erie.