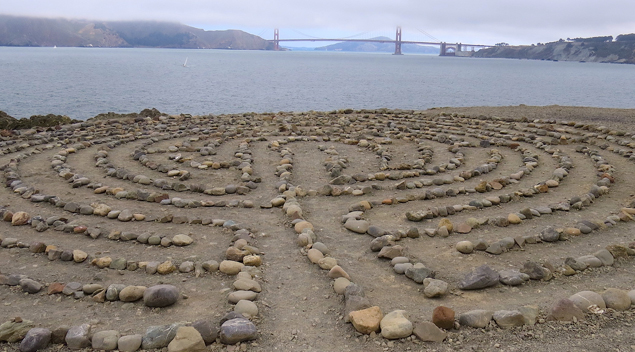 Each day, thousands of locals and visitors pass by one of San Francisco's most treasured landmarks, yet many don't realize its storied past. Even though it's one of the most famous structures left from the 1906 San Francisco Earthquake, Lotta's Fountain is barely recognized despite sitting at one of the city's busiest intersections. While this historic cast iron fountain isn't exactly hidden, there are several other oddities that aren't nearly as easy to find. Here's an introduction to five of the best hidden gems in San Francisco.

As local attractions, Land's End and Sutro Baths are well-known and not necessarily hidden. But if you venture out along Land's End Trail from either the parking lot or another trailhead, you may discover one of San Francisco's most remote and certainly most hidden gems. Known as the Eagle Point Labyrinth or Land's End Labyrinth, this fascinating work of art was created by local artist Eduardo Aguilera. Situated atop a promontory yielding spectacular views of the Pacific Ocean and Golden Gate Bridge, the labyrinth can best reached by the Land's End parking lot and closer yet from parking along El Camino Del Mar near the Legion of Honor, or from Point Lobos Ave. near 48th Ave. For many visitors, the trek to the labyrinth may not be an easy one, and everyone must be keenly aware of the painted markers leading down to Eagle Point Trail, along with its the uneven pathways and steps.

Note: The labyrinth was vandalized last month and may not appear like the photo above. There is no official word when the labyrinth will be rebuilt.

Inspired by famous Selaron Steps in Rio de Janeiro is another hidden gem just blocks from busy 19th Avenue-Highway 1. Years in the making, the 16th Avenue Tiled Steps project was a collaborative effort between local artists and more than 300 volunteers from the Golden Heights neighborhood. Leading the project were artists Aileen Barr and Colette Crutcher, who began work on the steps in January 2003. The 163 tiled steps features a sea to sky theme and visitors who scale to the top to Grand View Park are rewarded with glorious views of the city, as long as the notorious fog cooperates.

Far from any of San Francisco's major attractions, Cayuga Playground is a 3.89-acre park with not one, but multiple hidden gems. Sprinkled about the park near the southern border of the city is a remarkable collection of wooden sculptures created by the San Francisco Parks and Rec employee assigned to "change the atmosphere"at this little-known park. Demetrio Braceros, a native of the Philippines, created these remarkable sculptures, with some depicting celebrities like Princess Diana and John Lennon and beloved locals like the late journalist Herb Caen. Also among more than 375 sculptures are mythological gods, totem poles and even prehistoric creatures seemingly acting as sentinels for the tennis court, basketball court and the children's playground. A single sign on Alemany Boulevard helps guide visitors down the pathway to the relatively hidden park and playground. Another entranceway on Cayuga Street has less parking but leads directly to the playground's clubhouse.

One of San Francisco's most treasured landmarks is a single fire hydrant positioned at the southwestern edge of Dolores Park. It seems like any ordinary fire hydrant, yet upon closer inspection, a visitor will notice it's painted gold and even then it still doesn't evoke legendary status. But during the 1906 San Francisco Earthquake and its subsequent citywide fires, this "little giant" was credited for saving the historic Mission District from complete destruction. Each year, on the anniversary of the Great Earthquake, the fire hydrant receives a new coat of gold paint at 5:12 a.m., the exact time the massive earthquake destroyed 80 percent of San Francisco on April 18, 1906.

In a city full of hidden gems, the Wave Organ might be better allegorized as a hidden diamond. Located on a jetty overlooking the San Francisco Bay and across the Small Boat Harbor from Marina Green Park, the Wave Organ is an enormous wave-activated acoustic structure capable of emitting otherworldly sounds when waves crash against it. The extraordinary sculpture is the creation of Peter Richards, Senior Artist Emeritus of the San Francisco Exploratorium, and master stone mason George Gonzalez. Part of the permanent collection of the Exploratorium, the Wave Organ features 25 organ pipes made of PVC and multiple levels to walk upon made of stone, steel and concrete.