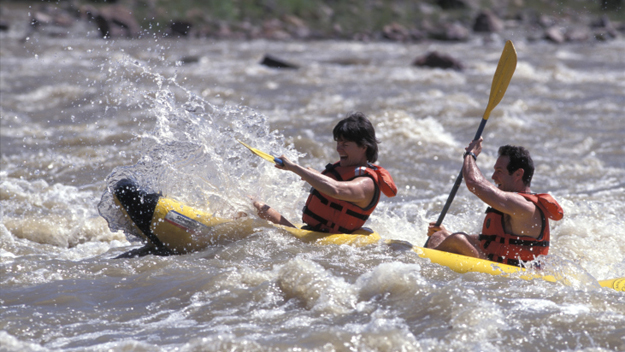 One of the most thrilling outdoor activities to experience in one's lifetime is a rafting trip through whitewater rapids. But certainly not all whitewater rafting locations are suitable for everyone. In fact, it's clear some of the most severe rapids are recommended for only the most experienced rafters, and some others  are considered far too dangerous to attempt, even for the experts. The following is a profile of five of the most extreme whitewater rafting locations in the world, based upon past history, first-hand experience and assessed by using the American Whitewater Organization's International Scale of River Difficulty, which classifies a Class I rapid as easy, a Class V rapid as at the expert level and a Class Vi rapid as too unpredictable and difficult.

One of the longest and most famous rivers in the U.S., the Colorado River is arguably the premier American destination for whitewater rafting. While the most celebrated trek leads whitewater rafters of varying levels through the incomparable Grand Canyon, other spots are considered far more extreme than the "granddaddy of whitewater rafting." This includes Big Drops 2 and 3 through Cataract Canyon and the 9.5-mile segment through Gore Canyon, both beyond the Arizona border. Traversing through Utah and Colorado, Gore Canyon features the experts only, Class V+ Gore Rapids and Tunnel Falls and the Class IV+ Kirschbaum's Rapid, the canyon's longest and most technical rapid. Also of particular interest to first-time visitors is Salida, south or Gore Canyon and the host city for FIBArk, known as America's Oldest Whitewater Festival and this year's host for the 2016 R6 National Championship.

Named after the indigenous Mapuche word for "Grand, Grand Waters," Rio Futaleufú is often referred to as the most famous whitewater river in the world. Extending some 66 miles along the Chilean-Argentine border in Northern Patagonia, the renowned whitewater destination features multiple Class IV and V rapids for rafters to negotiate, including three segments that are rated V+. The longest and most technically challenging rapid on Rio Futaleufú is the aptly named Terminator (Terminador), a .6-mile section rapid internationally recognized for its treacherous Class V+ center line. The two other Class V+ rapids are Zeta and Throne Room, the final two, but most challenging legs of the Upper Futaleufú. The best time of the year to raft on the Futaleufú is from December through March.

Accessible only by helicopter, the North Johnstone River is one of the world's most unique whitewater destinations, as well as one of the most difficult. The uppermost half of the 120-mile namesake river, the North Johnstone River, has a Class IV-V rating and is fabled for its massive volumes of water, whose flow is provided by one of the oldest rainforests in Australia. Among the most recognized Class IV-V rapids in this UNESCO-protected area in northeastern Australia are the Berlin Wall, Mordor, Mineshaft and Snake Falls. The North Johnstone River is located 20 minutes from Cairns, best known as a gateway city to the remarkable Barrier Reef. Also near Cairns is the Tully River, Australia's most famous and most popular rafting destination, with a variety of rafting trips offered by local tour operators.

Consistently mentioned as one of the world's top whitewater destinations, the Noce River (Il Fiume Noce) is widely regarded as one of the most challenging rapids in all of Europe. Located in the Brenta Dolomite Mountains near Val di Sole in Northern Italy, Noce River is primarily classified as Class III or IV, but as experienced rafters approach the village of Caldes, the rapids soar to a Class V rating. Further south is river's most difficult rapids, known as the Sawmill Rapid (rapida della segheria) past the bridge in the charming town of Dimaro. Continuing past Dimaro is Mezzana, the setting for several European Rafting Championships but also acclaimed for its famous slalom run for canoeists, in addition to its world-class ski facilities.

Flowing through six countries, the Zambezi River is the fourth longest river in Africa and the top spot for extreme whitewater rafting on the continent. The most challenging section of the nearly 1,600-mile-long river is in Zambia in Southern Africa, which includes the legendary Class V Ghostrider and the infamous Commercial Suicide, with an extreme Class V/VI rating. While Ghostrider is generally considered the ultimate whitewater experience on the Zambezi, there are several other amazing whitewater rapids to explore, beginning with Boiling Pot, a Class IV/V with its breathtaking trek below Victoria Falls, one of the world's best-known waterfalls. In all, there are 30 classified whitewater rapids on the Zambezi, with other world-famous Class V spots like Stairway to Heaven, Oblivion, The Mother and Gulliver's Travels, the longest of all the rapids on the Zambezi.

Related: Travel Guide To Morocco
Randy Yagi is an award-winning freelance writer covering all things San Francisco. In 2012, he received a Media Fellowship from Stanford University. His work can be found on Examiner.com