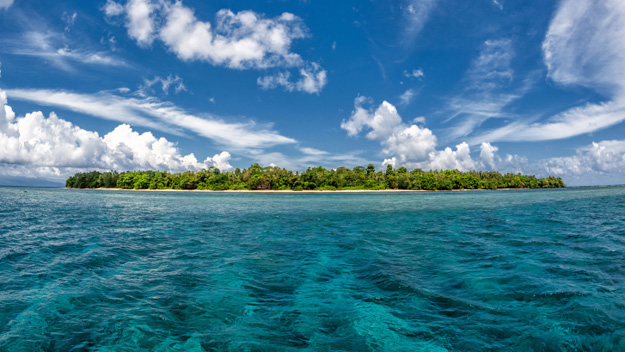 Most any beach among the 30 inhabited islands within the Bahamas can easily be considered among the best in the world. With consistent themes of white sandy beaches, calm warm, crystal blue waters and 300 days of sunshine, travelers have several beaches to choose from to suit their own personal preferences. The following is a brief introduction to five of the best beaches in the Bahamas.</p

Because of its proximity to the most famous and most recognizable resort in the Bahamas, Cabbage Beach on Paradise Island is an absolute must-see. On the other hand, it's just a short beachside stroll from Atlantis Resorts Bahamas, making it one of the most touristy. However, Cabbage Beach can be the perfect setting for people-watching, celebrity spotting, basking in the glorious sunshine or enjoying water activities like swimming or snorkeling. Atlantis Resorts Bahamas is an enormous property featuring six luxury hotels, major water attractions, a fabulous gambling casino and the world-famous Paradise Beach, seen in films like "Pirates of the Caribbean" and James Bond's "Thunderball" and "Casino Royale." Paradise Island is just a short ferry ride from Nassau, the capital and largest city of the Bahamas and home to the local's favorite, Cable Beach.

Cape Santa Maria Beach is consistently mentioned as one of the most beautiful beaches in the Bahamas and in the world. Located on one of the Bahamas' Out Islands, the white-powdered beach named after Christopher Columbus' flagship stretches four miles in front of Cape Santa Maria Beach Resort and Villas, selected as the second most romantic resort in the Bahamas by Travel+Leisure. With water temperatures averaging 80 degrees year 'round and spectacular views of crystal clear waters, the beach is a very popular destination for both guests of the phenomenal resort and the general public. Cape Santa Maria lies on the literally named Long Island, measuring 80 miles in length and world-acclaimed for its snorkeling, scuba diving and fishing.

Gold Rock Beach is often described by countless numbers of visitors as the most beautiful beach they've ever seen. Located 25 miles from Freeport in Grand Bahama's Lucayan National Park and one of the more popular secluded beaches in the Bahamas, this beach features gorgeous white sand beaches and calm azure waters. The 40-acre national park is also known for having one of the largest underwater limestone caves in the world. Still, past visitors will often say the beach known as the Grand Bahamas' "welcome mat" is the far greater attraction. One of the best times to visit is during low tide, when the beach appears like it could extend into the horizon.

Travelers with limited time hoping to see the best beaches should make an effort to visit Harbour Island or include it on their itinerary. Accessible via a two-hour ferry ride from Nassau, Harbour Island is world famous for its 35-plus miles of pale pink sand beaches, whose color is created by endless numbers of broken coral pieces and empty shells of foraminifera, a single-celled organism, that are spread and layered across three miles along the island's east coast. One of just a few destinations in the world with pink sand beaches, Harbour Island is home to a number of hotels and resorts, including the historic Rock House, Valentines Resort and Marina and the appropriately named Pink Sands Resort.

The Abacos Islands are home to a number of world-class beaches, including Tahiti Beach on Elbow Cay and Treasure Cay Beach. Situated on the a stretch of land that was once a cay on the east side of Great Abaco island, Treasure Cay is one of the most famous beaches in the Bahamas, with captivating turquoise waters and 3.5 miles of soft white sandy beaches. Great Abaco Island features two extraordinary beachfront properties — Bahama Beach Club and Treasure Cay Beach, Marina and Golf Resort. For visitors looking for something a little more remote, the recommendation is Tahiti Beach, accessible only on foot, bike or boat.

Related: International Trips You Can Do In A Weekend