SANTA CLARA (CBS SF) -- A smile crept across San Francisco 49ers quarterback Jimmy Garoppolo's face when asked to describe what it is like playing for one of the very few female assistant football coaches in the National Football League.

"She been tremendous," Garoppolo said of Katie Sower's impact on the team. "Katie was here before I was, but just what she does with the receivers, all the skill positions guys, how she interacts with them. It's special. She's feisty man. Katie is awesome out there. She'll get after guys ... It's fun to be around." 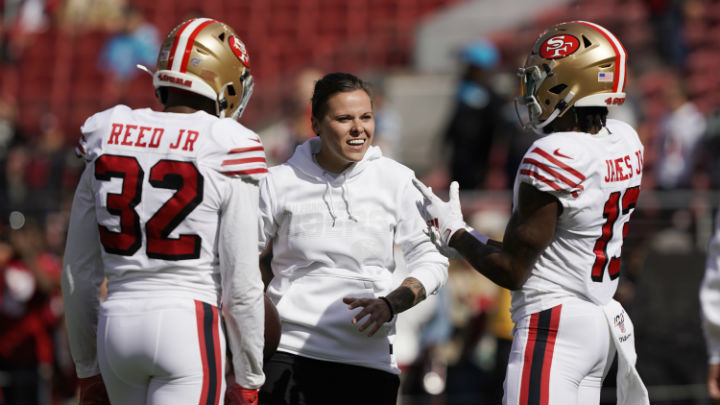 49ers head coach Kyle Shanahan, the former Atlanta offensive coordinator, saw Sowers potential when she was an intern with the Falcons in 2016.

Sowers, a former member of the 2013 United States Women's National Football Team, joined Shanahan's staff the next season in San Francisco as part of the 49ers Bill Walsh Minority Fellowship and worked with the team's wide receivers. 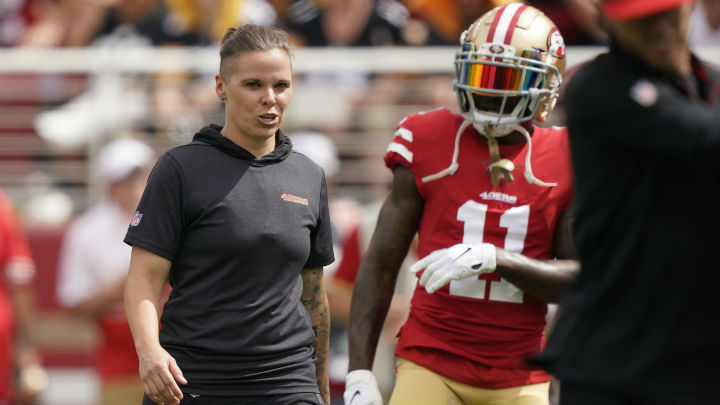 She was promoted to her current position of an offensive assistant coach in 2018. She drew some national media attention -- an article in People Magazine -- but mostly went about her job away from the limelight.

Then last Sunday, that all changed. Sowers was the subject of a TV ad campaign for Microsoft's Surface computer that aired during the Golden Globes award show.

In the ad, Sowers shows a page from her journal she wrote as a young girl.

"I hope someday I will be a good football player," the page reads. "I am good at football. When we play football at home, I can make a touchdown in one catch. I am the leader of our football club."

In her voice, Sowers adds: "I hoped someday I will be on a real football team."

Sowers, who also became the first openly gay NFL coach, continues in the commercial -- "I'm not just here to be the token female, I'm here to help us win...I would want to tell this little girl (an image of a young Katie in the commercial) to keep pushing herself. Your dream is coming."

The dream is coming -- the 49ers are NFC Champions and will play the Kansas City Chiefs in Super Bowl LIV.