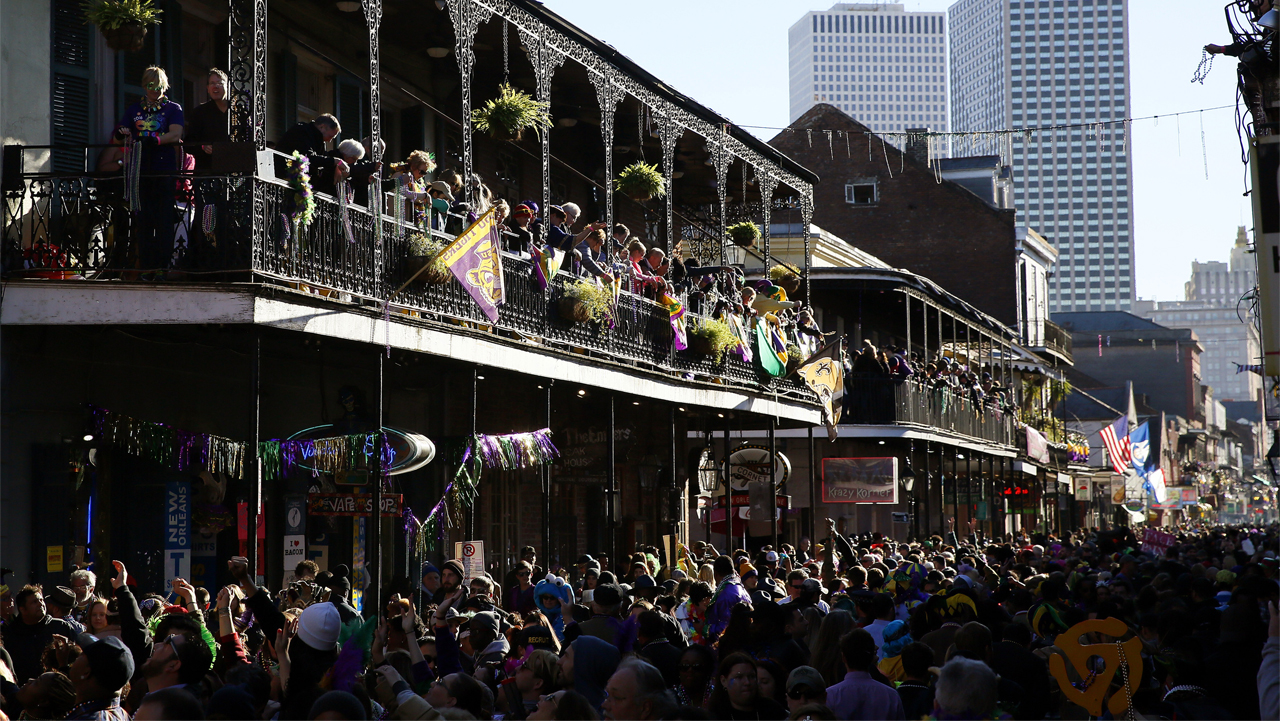 New Orleans is truly like no other destination in America. As rich in history as it is culturally diverse, Louisiana's largest city should be high on anyone's list of places to see in a lifetime. But if a visitor were to have just 48 hours to see as much as possible, what attractions should be part of the itinerary? This 48-hour guide explores the best things to do in New Orleans, in addition to recommendations for transportation, dining and lodging.

For first-time visitors to New Orleans, it isn't really necessary to rent a car. There are more than 10 taxi companies currently operating in the city and the city recently allowed the use of the popular ride sharing service, Uber. Additionally, the most affordable way to get around the city is with bus and streetcar services provided by the New Orleans Regional Transit Authority (RTA). While it will take more time to get from one place to another, first-time visitors might want to take a ride on one of New Orleans' historic streetcars, particularly the St. Charles line, the oldest continuously operated street railway in the world.

The entire streetcar system is comprised of five, color-coded routes and provides visitors with affordable transportation to many of the city's most popular attractions such as the French Market, the Garden District and the beginning of Bourbon Street. A single ride is just $1.25 and transfers are 25 cents. For multi-ride usage, a Jazzy Pass (day pass) can be purchased for $3 from a bus operator or streetcar conductor.

Related: Best Romantic Springtime Destinations In The US
Where To Stay

New Orleans is home to several outstanding hotels, with the majority located in or near the French Quarter. Among the most famous luxury hotels in city's oldest neighborhood are Hotel Monteleone, Royal Sonesta, Hotel Royal, The Roosevelt Hotel and Windsor Court Hotel.

Most of the more affordable options in and around the French Quarter are national chain hotels, although there are some nice boutiques like Dauphine Orleans, Hotel St. Helene and Hotel Le Marais. Other places to stay in New Orleans include the Central Business District and Warehouse District, although most are national chain hotels. Even more affordable and close to the St. Charles streetcar line is Auberge Nola Hostel, recently named the best hostel in America.

Other budget hotels can be found in Metarie, although most are of the national chain variety. However, Metarie, the oldest suburb in the city, is more than seven miles away from the French Quarter.

When it comes to America's best food destinations, New Orleans is always part of the conversation. Although Michelin Guides doesn't honor local restaurants and its acclaimed celebrity chefs with Michelin stars, many are worthy of that distinction.

Most of the city's most famous classic French Creole restaurants are in the French Quarter and led by world renowned chefs such as Restaurant August with chef John Besh, NOLA Restaurant and chef Emeril Lagasse, Bayona with Susan Spicer and Dooky Chase's Restaurant with the Queen of Creole Cuisine, Leah Chase. Other world-acclaimed New Orleans restaurants include Brennan's, the late Paul Prudhomme's K-Paul's Louisiana Kitchen and, last but not least, the four classic Creole restaurants known as the Grand Dames: Arnaud's, Broussard's, Galatoire's and Antoine's, the oldest restaurant in America.

Unlike lodging options in New Orleans, more affordable places to dine can be easily found all over the city. Of course, the French Quarter has its own share of low cost places to dine, such as Central Grocery Company, Cafe Beignet, Gumbo Shop, Johnny's Po-Boys and the must-see Cafe du Monde, world famous for its café au lait and mouthwatering beignets.

Chances are, visitors with just 48 hours will spend most of their time, if not all of it, in the French Quarter. But other sections of the city are well known for leading attractions and extraordinary restaurants like the original Emeril's in the Warehouse District, Dooky Chase's Restaurant with the Queen of Creole Cuisine, Leah Chase, in Treme-Lafitte and Commander's Palace — arguably New Orleans' best restaurant — in the Garden District. But visitors definitely can't go wrong with affordable spots like Parkway Bakery, Commerce Restaurant, Jimmy J's and the James Beard-award winning Cochon Butcher.

A visitor's first day really depends upon what's going on the city. Since New Orleans is known as the Festival Capital of the World, something seems to be going on each week and especially over the weekends. Still, on the rare occasion no big event is being held on the days of a 48-hour trip, there will be plenty of things to do to completely fill an itinerary.

Simply by impulse, the first place to visit is the incomparable Bourbon Street, in the French Quarter. Extending 13 blocks between Canal Street and Esplanade Avenue, Bourbon Street is likely the first spot people think of in New Orleans and the location for one of the world's most famous Mardi Gras celebrations. But even after America's most famous street party, something always seems to be going on, with restaurants, bars and nightclubs typically filled every day of the week, except for Ash Wednesday.

During a walking tour, visitors will quickly take note of the Spanish Colonial, Greek Revival and French architectural styles of the iconic buildings, as well as the lively businesses. Among the most notable places along the way include the Grand Dames restaurants, along with storied places like Preservation Hall, Old Absinthe House and Lafitte's Blacksmith Shop Bar, the oldest bar in America.

Following a first time tour of Bourbon Street, visitors are urged to further explore the historic French Quarter by visiting Jackson Square and the interesting shops nearby. Just a few blocks southeast of Preservation Hall, this historic public square is one of the primary centers of activity, frequented by a diverse group of street artists, musicians and artists. The centerpieces of Jackson Square are the equestrian statue of Andrew Jackson and the landmark St. Louis Cathedral, by far the city's most recognized church and the oldest cathedral in North America.

At this point in the tour, visitors might want to visit the historic Cafe Du Monde on Decatur Street for a cafe au lait flavored with chicory and the amazing French-styled beignets. While seating might require a long wait in line, visitors can also make purchases at the to-go window, although there's a good chance another line of people will be there. Either way, visitors are strongly urged to sample a package of incredibly delicious beignets as it's part of what makes New Orleans so special. However, visitors are advised not to wear black, due to the possibility of some powdered sugar on their clothing.

Just footsteps from the Cafe du Monde is the legendary Mississippi River, one of the world's longest rivers. Heading south on Decatur Street, visitors have the option of experiencing an authentic steamboat ride on the Steamboat Natchez or continuing the tour of the French Quarter to popular attractions like the historic French Market, the Old U.S. Mint or legendary bars like the Sazerac inside the Roosevelt New Orleans or the Carousel Bar and Lounge in the Hotel Monteleone.

In the evening, the French Quarter is the place to be for dining and nightlife, especially for the first-time visitor. After dining at any of the popular restaurants, an evening out really depends upon the personal preference of visitors. The first stop could be at lively places like the World Famous Cats Meow, Pat O'Briens or even one of the ubiquitous Tropical Isles. Other visitors might prefer something more restrained, like a full evening of live jazz at Maison Bourbon or Fritzel's European Club. Of course, visitors are free to bar hop from spot to spot and it's perfectly legal to drink alcohol on the street. However, visitors are strongly urged to drink responsibly, be aware of their surroundings and be mindful of strangers.

The second and final day of a 48-hour trip should include other sites in or around the French Quarter or major attractions in other notable neighborhoods. Just beyond the border of the French Quarter past North Rampart Street is St. Louis Cemetery No. 1, the oldest extant cemetery in the city. Opened in 1789, the historic cemetery requires a paid entry fee and all visitors must be in one of the posted tours with an official tour guide.

A few blocks northeast of the historic cemetery is Louis Armstrong Park, which is of considerable interest to music fans. Within the 32-acre park is Congo Square, a historic gathering area where 19th-century residents socialized and often played music, which evolved into the earliest form of African-American music in the country, and the first site of the original New Orleans Jazz and Heritage Festival. Outside the French Quarter are a host of other major attractions for visitors to consider. Among the most popular are the renowned National WWII Museum, Harrah's Hotel and Casino in the Central Business and a tour of the stately 19th-century mansions in the Garden District.

Dining and evening entertainment include any of the previous recommendations, such as a very special trip to Commander's Palace. But one other exceptional spot for nightlife worth visiting on the final night is Frenchmen Street, an enormously popular spot featuring several jazz clubs, bars and restaurants located in the Faubourg-Marigny neighborhood.

Related: A Music Lover's Guide To The South