LAKE COUNTY (CBS SF) -- A fire that started Saturday afternoon in Lake County and spread to Napa County later in the day has destroyed structures, burned 40,000 acres and injured four firefighters according to Cal Fire and the Lake County Office of Emergency Services. 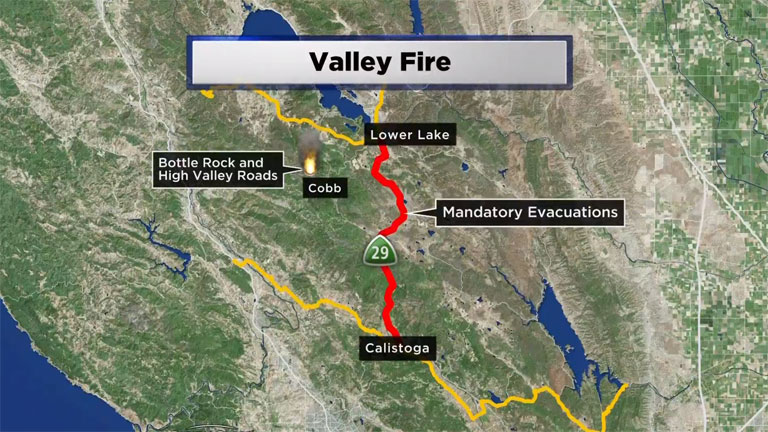 Some evacuees are reporting on social media that Harbin Hot Springs has been damaged, if not entirely destroyed.

More than 1,000 firefighters are fighting the fire and getting people evacuated from the area. Areas of Napa County are under advisory and could be under mandatory evacuations later on Sunday.

There have been an unconfirmed number of structures destroyed. Over 5,000 residences were without power.

Senator Mike McGuire (D-Healdsburg) tweeted Saturday night that federal assistance was already moving in to help with the Valley Fire.

The fire started Saturday afternoon around 1:30 p.m. The thick dry brush fueled the blaze and it grew quickly from 50 acres to 25,000.

People who live nearby posted pictures on social media all afternoon and said it's raining ash.

There is literally ash falling from the sky from all of the fires. It's so smokey and terrible outside :( #ValleyFire

"Our hearts are breaking right now," Lake County OES spokeswoman Jill Ruzicka said. She said some people in the emergency operations center had to leave to take care of loved ones.

The firefighters hurt in the blaze suffered second degree burn injuries and are being treated at a special burn unit at UC Davis Medical Center.

They were members of a Lake County helicopter crew. CalFire tweeted all four of them are in stable condition.

According to the Press Democrat, "multiple structures have reportedly been burned" and some evacuees have "lost their homes and animals."