Helicopter video showed at least one car -- still on the rack -- completely destroyed by the flames at the AutoNation Acura Stevens Creek. It was not immediately known any other cars were damaged by the flames. 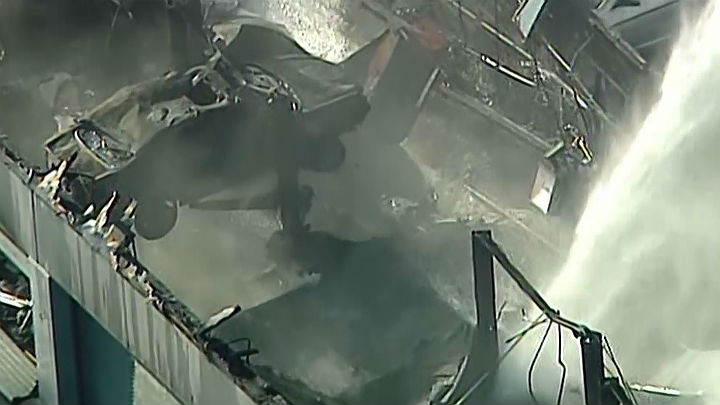 According to dispatch, the fire was first reported at 6:23 a.m. at the dealership located at 4747 Stevens Creek Blvd. The effort to battle the fire forced delays to traffic on the well-traveled boulevard.

"There was very heavy smoke (when firefighters arrived) in the area," said Santa Clara Fire Chief Bill Kelly. "They went inside to fight the fire... The incident commander got here and saw the condition of the building and pulled that crew out. The fire erupted through the roof. The roof then collapsed and firefighters began an exterior defensive fire operation."

Kelly said because the blaze was in the service bay area, where there may be old oil in barrels and gasoline in cars, the response was raised first to a second alarm and then a third. He said the auto repair facility was a total loss.

Firefighters were able to contain the fire to the service bay area and keep it from spreading into the showroom.

There were no injuries reported. A source of the fire had not been determined.