SAN FRANCISCO (CBS SF) -- Like millions of San Francisco Bay Area residents Talia Sechley awoke on Sept. 9th to a scene from an apocalyptic movie. The sky over Oakland was dark and blood orange.

It was frightening and among the most memorable images of a historic 2020 fire season that burned more than two million acres in Northern California -- 3,125 square miles -- nearly three times the size of Chicago, Manhattan and Los Angeles combined. 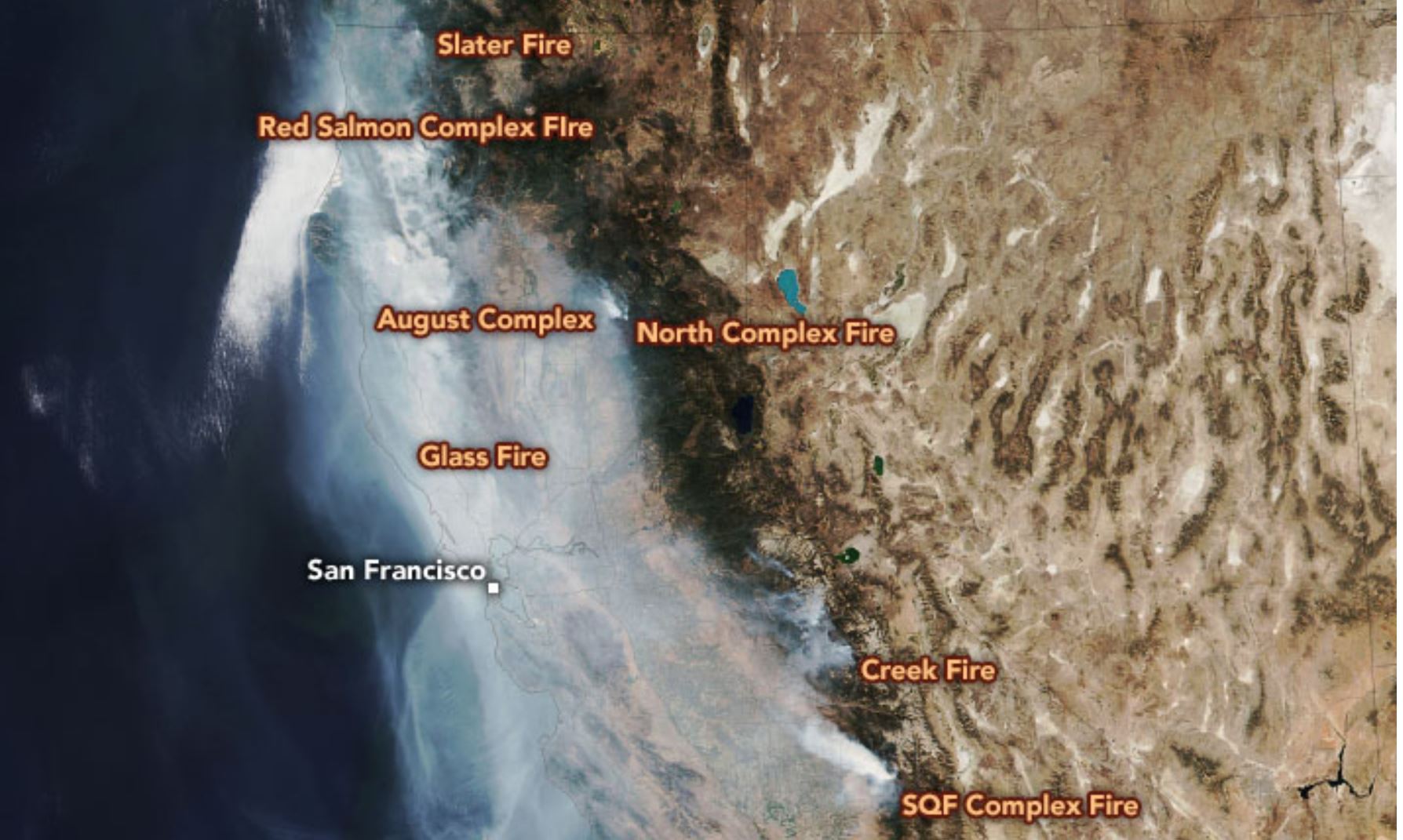 Harmful smoke choked Bay Area skies and triggered the unsettling scenario that greeted local residents as ash fell from the sky like raindrops, the smell of smoke assaulted the senses and the sun disappeared.

"It's an eerie morning in Oakland," Sechley posted on social media. A comment echoed by a local designer who goes by the social handle of Roqo.

The thick layer of smoke in the upper atmosphere scattered wavelengths of blue light, allowing only the warmer colors to reach the Earth's surface. The effect was most pronounced in San Francisco, where bright red-colored photos of the city's iconic landmarks, Lombard Street, Embarcadero, Coit Tower, Golden Gate Bridge, and Bay Bridge, flooded social media, complete with explanations of "no filter."

"I don't know when this is gonna happen again. and it's very important we document it and capture it. So that we can prevent this from happening in the future," said photographer Sebastian Valle.

While it looked like the world was coming to an end, the orange and dark skies were an ominous sign of what maybe in our future.

"Unfortunately we can expect more of the same. That is absolutely clear because all the science is very consistent that these are the kinds of events that have been predicted for decades and all of the signs point to more of the same," said David Ackerly, UC's Dean of Rausser College.

It all began with another freak of nature -- rare, massive dry lightning storms in August. State fire officials said over 72-hour span there were more than 11,000 lightning strikes, igniting hundreds of wildfires.

The SCU Complex ranked No. 3 on the list of the largest wildfires in California history at 396,624 acres while the LNU Complex ranks No. 5 at 363,200 acres and claimed six lives.

"We were at a point where we felt comfortable calling it controlled," said Cal Fire CZU Unit Chief Ian Larkin. "We had finished mitigating most of the fire suppression activities."

While the flames may finally be out across Northern California, the scarred earth, shattered dreams and memories and the human toll will linger with local residents for years.

Among them is Hank Hanson, who stood amid the ruins of his wine country home in September. Somehow his tomato plants had survived the firestorm that destroy nearly everything in its path.

"They escaped the whole deal," the 81-year-old said. "About the only thing I have left in the world is tomatoes."

Hanson says he still hears sirens in his dreams -- a byproduct of living nearly 30 years in the wildfire-prone wilderness area. But Hanson knew he wasn't dreaming when he looked to the hills above his Vacaville area home as the LNU Complex fire closed in.

The ridge line, where he and his wife in daylight tracked the sun's shifting seasonal paths, was lit up as if someone had strung lights across it and plugged it in.

"It started pouring toward us like a waterfall," Hanson said.

The horrors didn't end with the August fires. The Glass Fire Complex roared to life amid triple digit temperatures, bone-dry humidity and gusty winds early during the morning hours of Sept. 27th. 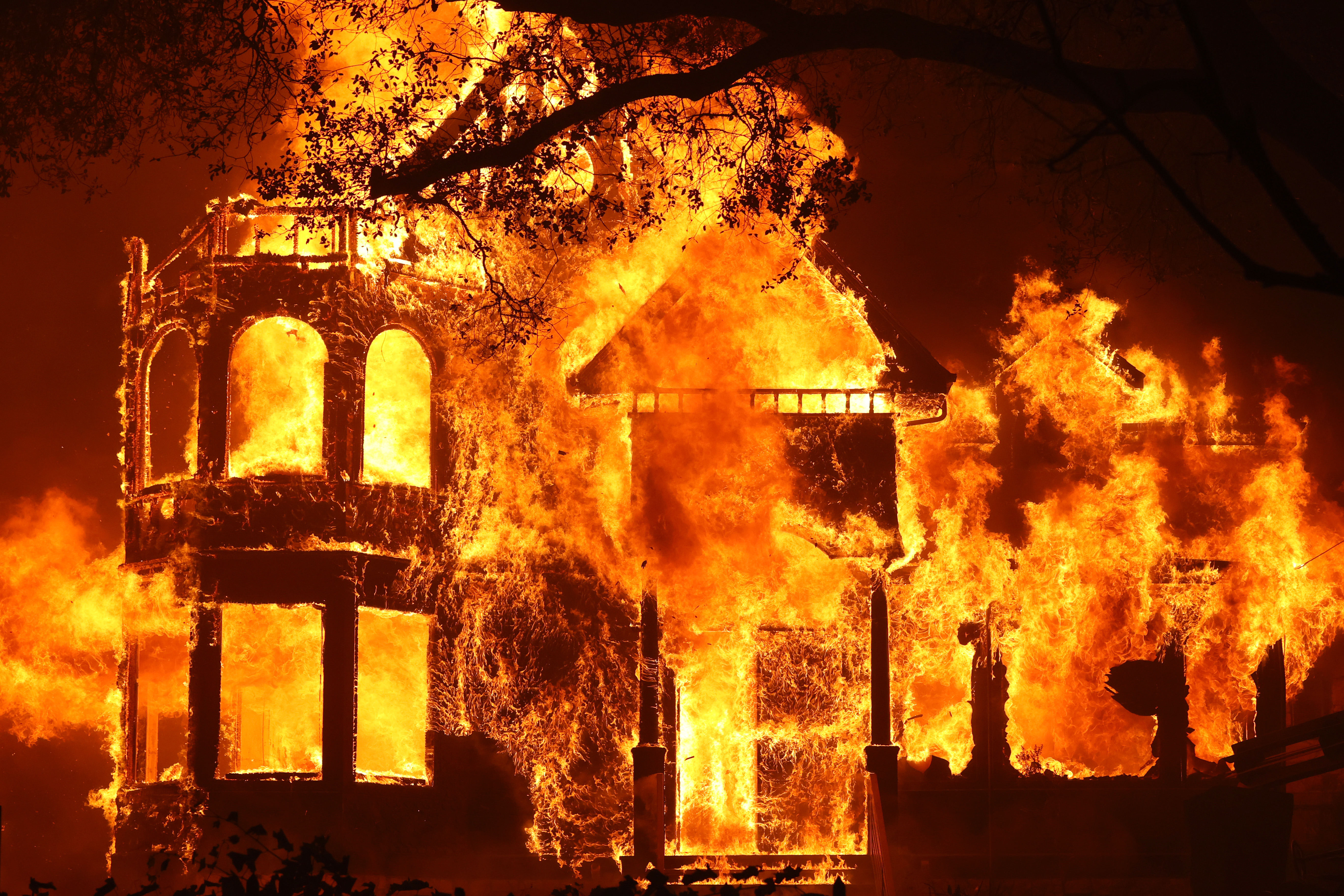 The flames tore through the heart of wine country -- burning homes, destroying or damaging more than two dozen wineries. 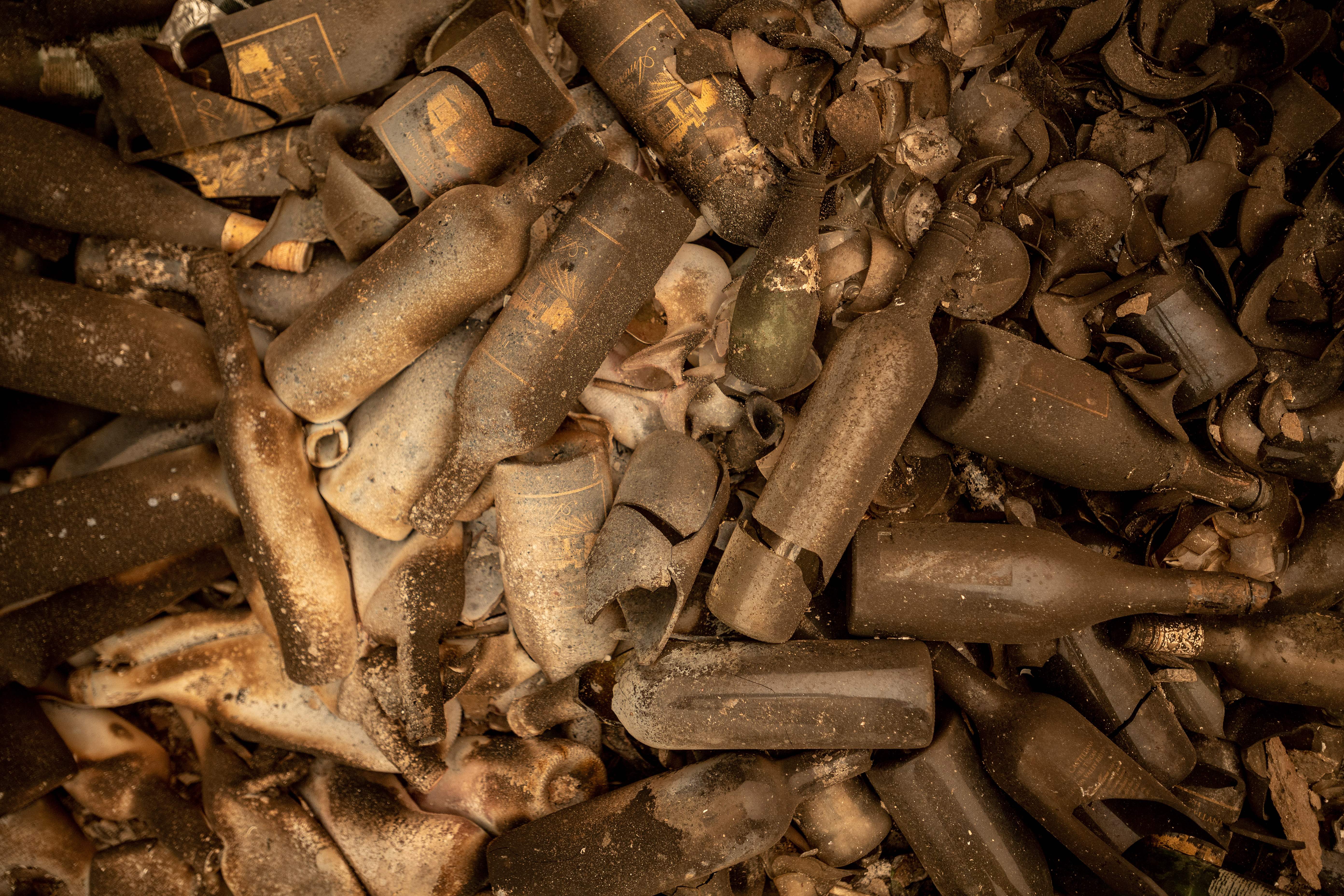 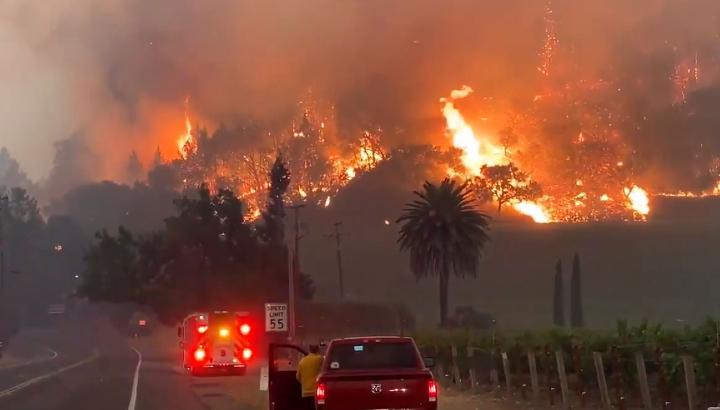 For many of the 642 families that lost their homes in the fire, the days ahead will be one of recovery.

"This whole length there was the living room," said resident Mary Ann Parrish as she surveyed the remains of her home in the Deer Park Community above St. Helena. Her family were pioneers in the area and built the first homes there.

"Unreal," she said, shaking her head. "I mean, it's what we work for all of our life, you know? Everything, it's gone."

But Mother Nature wasn't through yet. Wildfires ripped through acres of trees killed by bark beetles and drought in the Sierra near Shaver Lake in Fresno County and in the mountain communities of Yuba County.

The Creek Fire roared to life in September, spawning two firenados as it raced through vacation homes and communities in the popular recreation area near the lake.

It also led to one of the most dramatic rescues of the devastating fire season.

Had it not been for the bravery of National Guard helicopter pilots, several hundred may have died in the blaze. Black Hawk and Chinook helicopter crews braved heavy smoke, high winds and nearby flames to rescue more than 200 trapped people on Sept. 5th near the Mammoth Pool Reservoir in Madera County. At least two people were severely injured and 10 more suffered moderate injuries.

"People are remarkable in these moments and selfless in these moments. Again that was exampled other the weekend in these heroic efforts of these two helicopters that landed, rescuing 214 individuals in very difficult circumstances," said Gov. Gavin Newsom of the heroics. "They very easily, very easily, could have turned around and said the smoke made that mission too dangerous, but they went in anyway. They saved many, many lives."

Officials said the intense heat of the fire, fueled by thousands of dead trees, created it own weather system and sent a pyrocumulus cloud soaring thousands of feet into the sky.

In Yuba County, the North Complex fire took a deadly toll near and in the mountain community of Berry Creek. Tragically, 15 would die as they attempted to flee the flames.

The blaze traveled more than 30 miles over an 18-hour stretch after it jumped over fire lines, leaving in its wake a path of death and destruction. Squarely in fire's path was Berry Creek — an unincorporated town of about 1,200 people. 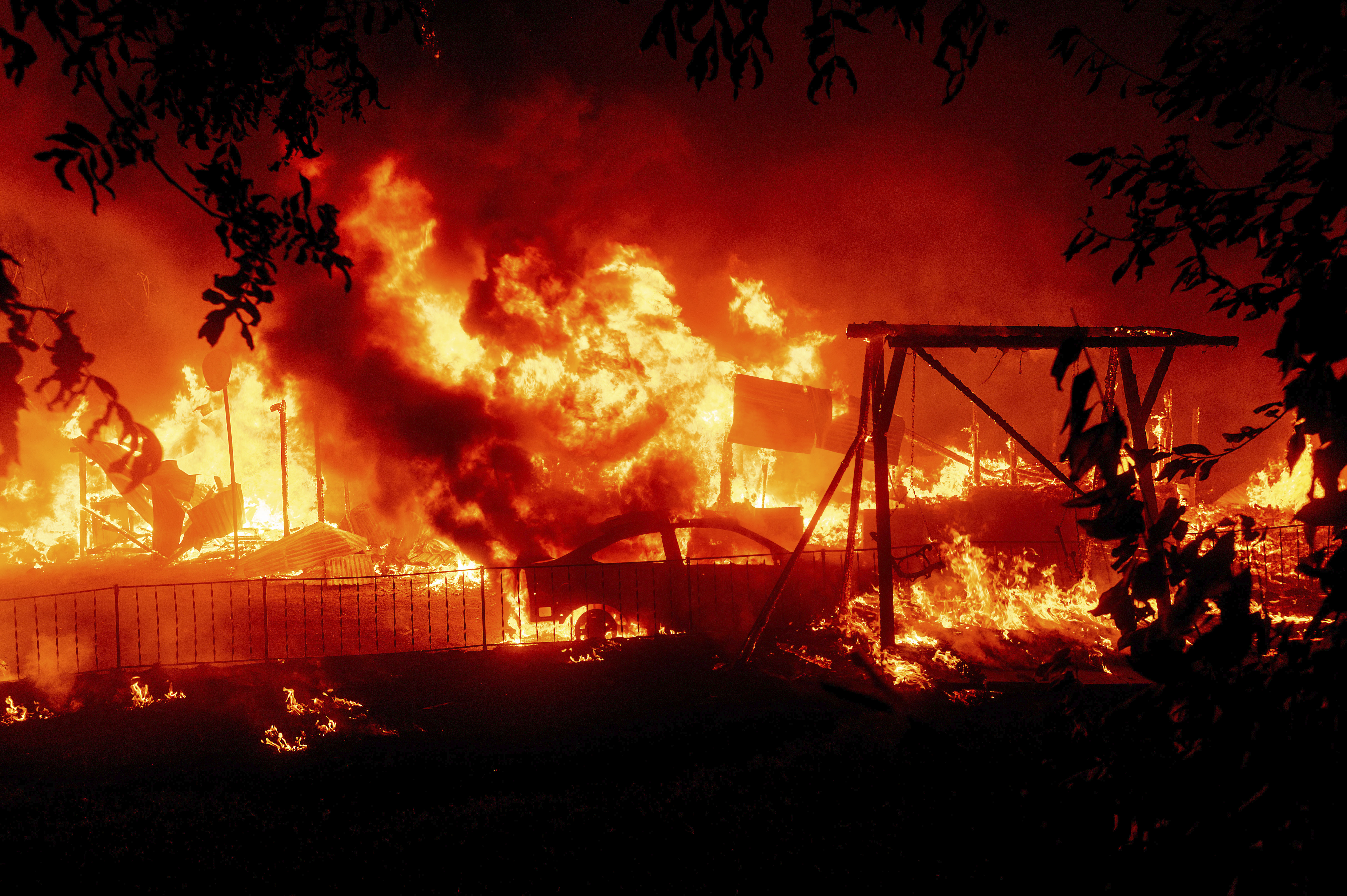 Among those trying to escape was Misty Spires and her boyfriend, Jonathan Gonzales, who had spent time trying to save their home and other structures with a fire hose that the volunteer fire department hooked up to a hydrant.

But by 4 a.m., they decided it was time to go. Propane tanks began exploding and they were dodging embers "as big as my feet," Spires told the Associated Press.

They didn't get far before they ran into a jammed two-lane bridge leading out of town.

Sensing that they needed to do something quickly, Spires and her boyfriend guided others to a muddy sandbar north of Lake Oroville.

Gonzalez knew the area was clear of trees and close to the water and told the drivers caught in the jam getting out of Berry Creek to follow him.

"He told the others, 'If you want to live instead of sitting on this bridge follow me,'" she said. "He saved a lot of lives."

Once there, Spires said most people stayed huddled in their cars. But others got out and consoled each other.

"There wasn't much that you can say in that situation but to say, 'I'm glad you're alive,'" Spires said.