OAKLAND (CBS SF) -- A three-alarm fire raced through a warehouse filled with building construction supplies in East Oakland on Monday morning, sending a massive plume of smoke that was visible over much of the Bay Area.

Officials said the fire erupted at the warehouse on the 2000 block of Solano Way near 19th Avenue, shortly before 8:30 a.m. The building is home to American Emperor Supply, a company that provides construction materials, and is well known for its massive "I (heart) My Oakland" sign. 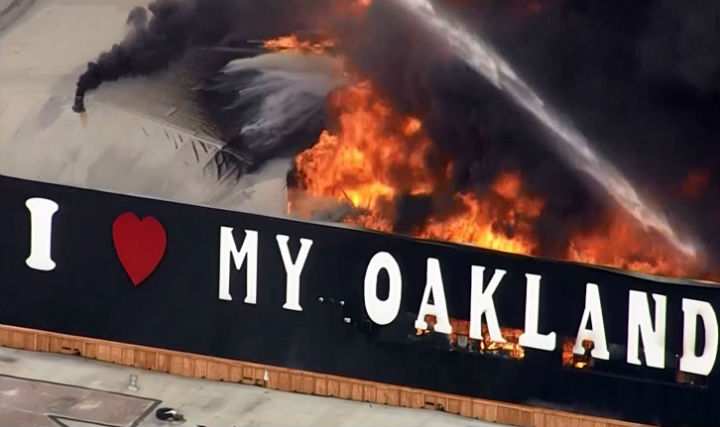 "It started as an outside fire," said Oakland Fire Battalion Chief Melinda Drayton. "It was a debris pile...The engine company that got on scene said they had flames going into an open window."

The flames spread quickly and soon ignited large piles of building construction material and boxes stored inside the building. The blaze was escalated to a 3-alarm response. There were 60 firefighters on scene battling the fire.

"Firefighters went into this building initially to fight the fire offensively and it just got too big on the second floor and started running the building," she said. "So we pulled firefighters out and went defensive."

Crew also made sure flames do not spread to the south to a building under construction at East 12th Street and 20th Avenue.

Drayton said no firefighters were injured and "as far as we know, everyone is out of the building." She said a transformer exploded across the street from the fire, but was not causing issues for the firefighters.

Oakland police did help evacuate about 20 people from the first floor of the building.

The fire department asked people to avoid the area because of the emergency response and poor air quality since the fire created a large plume of black smoke that was visible from much of the East Bay.

The warehouse is located not far from BART tracks and Interstate 880. BART officials told KPIX 5 that service has not been impacted but were monitoring the fire.

Drayton said the cause of the fire was under investigation.

"We are talking with witnesses and any residents in the neighborhood," she said. "There are some surveillance cameras. We will be looking at those and trying to determine a cause."