The 49er's are yet again on their Quest for Six. If you want to celebrate each playoff victory with other members of the Niner faithful, here's a list of some of the Bay Area's best pubs for partaking in football fever:
Noe's Bar
1199 Church Street, San Francisco
(415) 282-4007If you're looking for a spot in the bay area with quality music, authentic bar food and plenty of TV screens to watch all your local teams; look no further than Noe's Bar.  Friendly and enticing staff adds to the experience and ensures you'll want to become a regular.

You'll spot this Hihway 1 landmark by the double-decker bus and smoking lounge visible just off the road. Inside the pub and Inn is a cozy place to escape the coastal fog, enjoy a pint and make some noise for your favorite team.

Known for its cozy, laid-back vibe, the Albatross sits slyly on San Pablo Ave., a local secret with an atmosphere that greets you like the guts of an old wooden pirate ship, overflowing with frothy beer and competitive spirits. 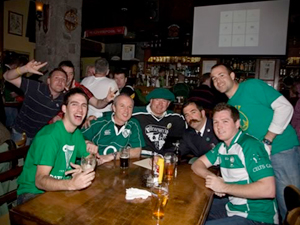 The Chieftain was built using mahogany wood, which creates a majestic acoustic environment that is enjoyed at all our live music events. The Chieftain has hosted hundreds of parties and we are San Francisco's recognized chosen destination for all international sporting events of interest including soccer, rugby and football.

7 Mile House
2800 Bayshore Boulevard, Brisbane
(415) 467-2343
The game is on at 7 Mile House, where the hottest sporting events, live music and great food come together in a vibrant, historic atmosphere! Over the past 150 years, this place has become a stagecoach stop, brothel, biker/trucker hangout, and gambling joint, among others —— all adding to the rich character of the Bay Area's last original "mile house" left in its original location.

Mad Dog is open until 2 a.m. every night giving you plenty of time to try all the tasty beers they have on tap as well as their stellar hot wings.  Football is the sport of choice at the Mad Dog and you can find a game on almost any time.

Named best in the city by The San Francisco Chronicle, Kezar's is home to a variety of television events and games to entertain the whole family. Pool tables, darts, video games and a great television package make Kezar's a multifaceted sports bar.

The Mucky Duck possesses much more than just a cool name. This bar features an extensive drink menu, plenty of televisions and a lively atmosphere.

Ricky's was named one of the "top high-tech sports bars" to watch NFL games, according to Commercial Integrator. With over ninety televisions, Ricky's lives by the motto of, "We've got your game." Not matter what sport you are into, Ricky's can show it and you never know who you might run into as many athletes and celebrities have been spotted here.

Bus Stop Saloon
1901 Union Street, San Francisco
(415) 567-6905
Staking it's claim as the oldest sports bar, the establishment has been a saloon since 1900 when first recognized as the Aly Inn. You'll find plenty of camaraderie around a wealth of TV's, but not many empty seats.

Along this stretch of Union Street, amidst the rowdy, drunken high-five-fests, you'll find a bright, friendly, more mature vibe at the Brick Yard. The Brick Yard has more than enough televisions; including a movie screen cracked open for the truly big games.

Picture a relatively classy frat house turned into a huge bar filled with friendly alumni. And you've got Pete's Tavern. The barbeque is pretty great, but the huge horseshoe bar is where you want to be.

This downtown San Jose hotspot is just a few blocks from the SJ Sharks' home at the HP Pavilion, and people flock to the Brit for a bite before and a pint after. The bar, giving back all that love shown to it, knows what it takes to make a great place to watch a game, celebrate a win or mourn a loss. There are 24 HDTVs, $20 towers of beer, Pint Night during Tuesday games (featured beer comes with a free glass pint), $1 draft and $1 wings on Monday Night.

Tied House creates its own beers–all ales–grinds its own beef, mixes its own secret spice blend and smokes meats over a dark ale-soaked cherry wood. But before you lift your pinky and think it's all about good eating, take a look at the massive 120" HD TV and the other 11 HDTVs that make this a sports bar of choice.

Ever wondered what an 'old English Pub' looks like? Well, tucked away on Parrott Street in San Leandro you'll discover The Englander Sports Pub & Restaurant. This comfortable, casual and trendy authentic English Pub has become the talk of the Bay Area and beyond.