SACRAMENTO (CBS13) — A driver has been arrested for allegedly firing a projectile at another vehicle on a Sacramento-area freeway in an incident that went viral on TikTok.

The shooting happened on the morning of June 29 along southbound Interstate 5, near Cosumnes River Boulevard. 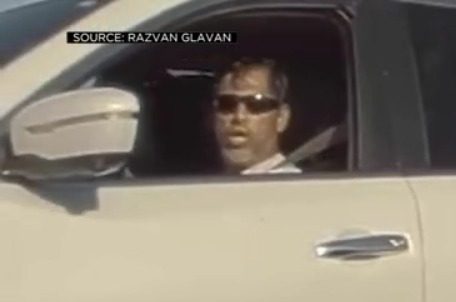 California Highway Patrol says a Tesla driver was heading down the freeway when someone pulled up alongside them and fired something, shattering a side window.

Officers say they quickly ruled out that the suspect used a gun.

But, as seen in the video that was taken by the Tesla's cameras, the suspect can be clearly seen pulling alongside the car and raising some sort of device. He then fires and shatters the window.

The Tesla's owner talked to CBS13 and said he had just bought the car.

"I got glass all over after the incident," said Razvan Glavan.

The video was posted to TikTok and went viral, listing the suspect's license plate number and urging people to call authorities if they saw him.

On Wednesday, CHP announced that they had served a search warrant in the North Sacramento area in connection to the incident. Officers say the suspect, 42-year-old Jose Eliseo Capacho Bonilla, was found sleeping in the same SUV captured in the Tesla video.

Officers found two homemade contraptions inside the SUV that appear to have been used to fire projectiles. Several BBs and nearly a dozen other rocks shaped into round balls were also found.

"The whole vehicle was just full of shattered glass, so I'm sure if someone would've been there they would've been badly hurt," Glavan said.

Bonilla was arrested and is now facing felony charges of vandalism, assault with a deadly weapon, and throwing a substance at a vehicle.