ROCKLIN (CBS13) — A Rocklin man is accused of stealing documents from Mitch McConnell's desk and a flag from Nancy Pelosi's office during the Capitol riots. 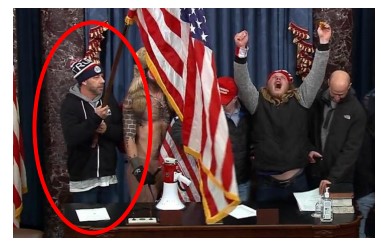 This is the third Sacramento-area person tied to the deadly riots earlier this month. Tommy Frederick Allan, 52, was caught on video admitting to stealing documents from the Senate Chamber. Allan is seen with an American flag in his hands inside the U.S. Capitol on the day of the riots.

A criminal complaint says the video shows Allan taking documents from a desk in the senate chamber and stashing it in his back pocket. It also says the FBI started investigating him after tips that he posted footage online of people breaking windows at the Capitol.

Neighbors aren't surprised to learn someone from their community participated in the riots.

"They think it's their business to get involved in all this stuff and create chaos," said Tricia Debord.

"It's not right. I know they got their point across, but it didn't stop anything," said Jenna Debord.

The complaint references videos Allan posted to his personal Facebook page, and says "Upon being asked by an unknown individual off-camera why he took the documents, Allan replied because he was a "Taxpayer"... Allan then stated "They took my flag," and "They took it from me right before I left."

Neighbors tell CBS13 Allan and his wife own a small business in the Rocklin and Roseville areas. The complaint says Allan deleted his Facebook page and destroyed the government documents before returning home to Rocklin.

He's charged with three misdemeanors including theft of government property, which could put him in custody for up to a year. Allan appeared in court last Friday and was released. Court documents show he's due back in court Friday.