SACRAMENTO (CBS13) - He received a lease violation for displaying a religious sculpture.

A 72-year-old Sacramento man says he was forced to remove a statue of Jesus from outside his own front door at the Glen Ellen Mutual Housing Community apartment complex because the apartment manager called it a lease violation, displaying personal items in common areas. 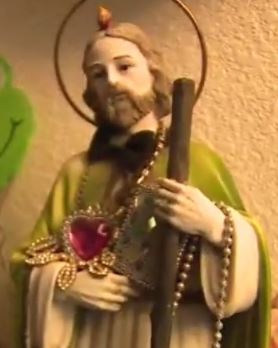 "This here, this here is a statue of Jesus Christ that I got wrote up for having, that I've had here 15 years," Paul Nickson said. "They called it a common area, which is, the front of my door is not a common area."

The statue Nickson had outside his front door for 15 years now sits inside his home. Nickson says his new apartment manager forced him to move it or he could have received a second notice.

"That could lead to me being evicted from my apartment," Nickson said.

Nickson has recently received a series of notices for violations, including one for having a broom in his carport.

Diablo Nash lives in the same complex and has also recently received a stack of violation notices from the same new apartment manager.

"I don't understand it," Nash said.

One of his lease violation notices was for having a cover over his car on his carport.

"She didn't like that it was covered," Nash said. "She wants to see the tags."

"It's discrimination," Nickson said. "And it's harassment. And I'm telling you the way she talks to you its highly unnecessary."

Sharon Calkins in the apartment manager.

CBS13's Steve Large tried talking to her. She turned from the camera and walked away, into her home.

"Sharon? I have a quick question for you Sharon," Large said.

Calkins would not answers questions with our camera rolling. She also did not return voice messages or emails.

People who live here have reached out to the Sacramneto Tenants Union for help.

"Folks are terrified," Sacramento Tenant's Union volunteer Erica Jaramillo said, "because they're getting notices. And the next thing that happens after the notice is an eviction process."

Jaramillo says that 8 of 38 tenants have complained about written and verbal notices at the apartment. She calls it the most egregious case she has seen in Sacramento.

Molly Current is the Fair Housing Director for Project Sentinel and says there is power in numbers when it comes to complaints against a landlord.

"Well, if you have a lot of tenants who are making a complaint, that makes it look a lot less like a personality dispute between the landlord and tenant and a lot more like a problem with the way the landlord is handling those things," Current said.

The tenants here say it's not "home sweet home."

They call it harassment.

CBS13 also reached out to the apartment manager's supervisor who referred us to a communication coordinator.

That person also did not respond to requests for a comment.