Thursday 2:30 a.m. Update: The suspect in the shooting of Officer Tara O'Sullivan has surrendered after an hours-long standoff with police. 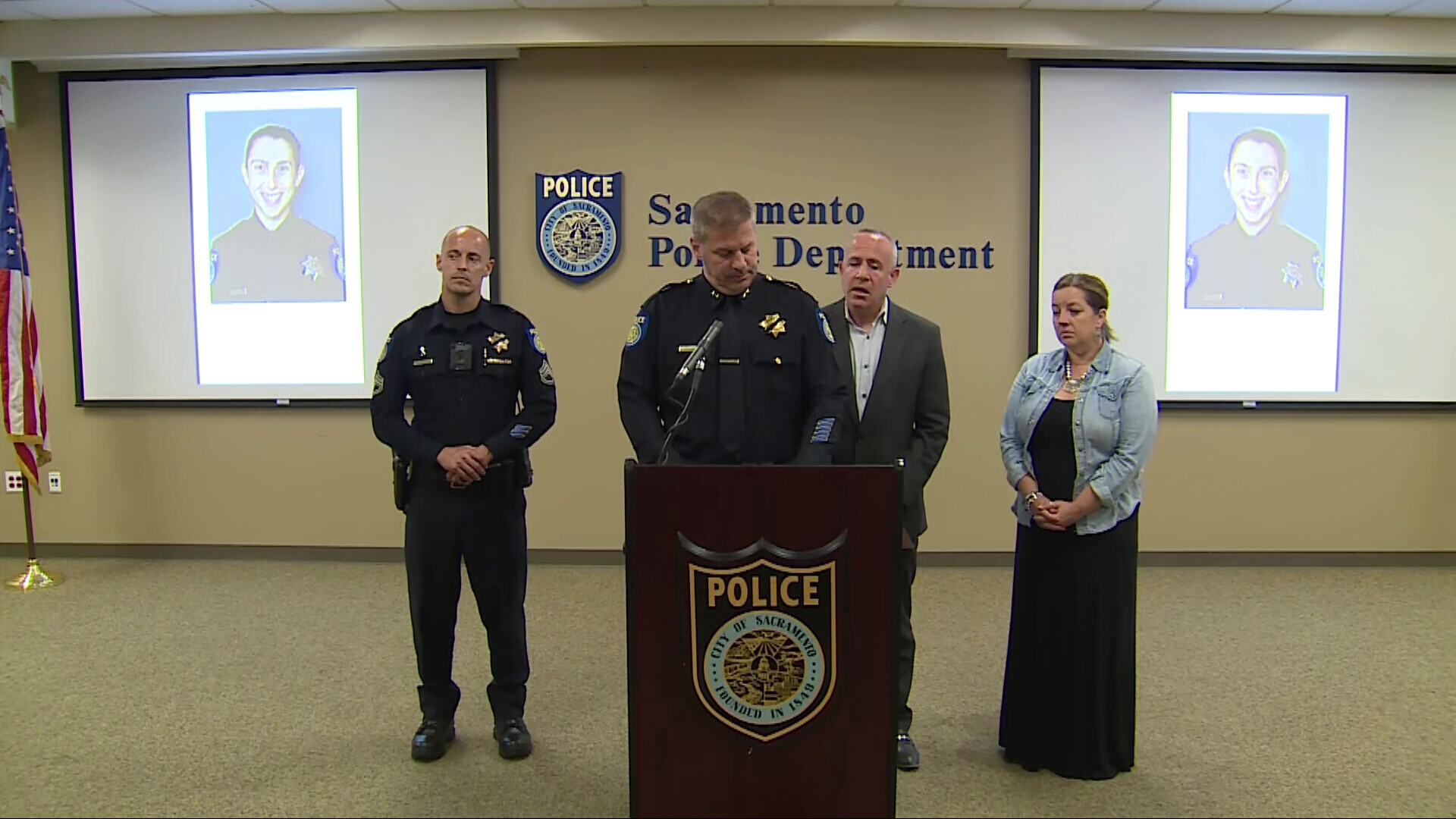 O'Sullivan was hit by gunfire while on a domestic disturbance call with her training officer on the 200 block of Redwood Avenue.

Due to active fire, it took officials nearly an hour to get to O'Sullivan, who was down in a yard behind the suspect house.

She was then taken to the UC Davis Medical Center where she was pronounced dead after going through surgery.

Deputy Chief Dave Polletta said a room was set up for O'Sullivan after she was pronounced dead to allow family and law enforcement to visit her. She was transported to the coroner's office in a police procession before the 12:40 a.m. press conference Thursday.

Police said O'Sullivan with her training officer and other officers when the gunfire started. They said officer O'Sullivan was in phase training and scheduled to shadow in a couple of weeks, meaning she would be going out on her own.

O'Sullivan graduated from the police academy in December 2018. A Sacramento State graduate, O'Sullivan studied Child Development and was in the first class of in the Law Enforcement Candidate Scholars (LECS) program.

The standoff on Redwood Avenue is still ongoing. Police said negotiators are on the scene working to get the suspect to peacefully surrender.

Police reminded the community that the area is still dangerous until the suspect is detained.

10:42 p.m. Update: As the standoff continues on Redwood Avenue, the Twin Rivers Police Department has opened Noralto Elementary School at 477 Las Palmas for those who have been displaced by evacuations.

Police remain in position, barricaded outside of the suspect house. Reports of shots fired continued into the night.

The identity of the officer injured in the shooting has not yet been released. Per the last update, police said the officer was in serious condition.

According to police, officers were called about a domestic disturbance Wednesday morning. Around 3:30 p.m. officers responded and made contact with a female at a separate location.

The officers then accompanied the female to the 200 block of Redwood Avenue to help her gather her belongings. Multiple officers were on the scene when the suspect opened fire, striking one officer, around 6:10 p.m.

More officers responded to the scene and took safe positions. The officer struck went down in a yard as the suspect continued to fire from a high-powered rifle.

Officers remained in safe positions until an armored vehicle could get to the scene, around 6:54 p.m. The officer was then taken to the hospital around 6:59 p.m. and remains in serious condition, according to Sacramento Police Sgt. Vance Chandler.

Police believe there is only one suspect, who was still firing a rifle as of 8:20 p.m.

SWAT officers on the scene have not made verbal contact with the suspect as of yet.

Chandler also said the female from the original domestic call is safe and was taken from the location.

Watch the press conference below:

7:50 p.m. Update: Law enforcement sources confirm that a female Sacramento Police officer was injured in the shooting on Redwood Avenue in the Noralto neighborhood.

Police are still barricaded outside the suspect house with guns drawn.

As CBS13 crews arrived on the scene, they were told to get down to get out of the line of fire.

7:21 p.m. Update: Sacramento Police officers have arrived at the UC Davis Medical Center in Downtown Sacramento after reports of an officer down.

It has not yet been confirmed who was taken to the hospital.

7 p.m. Update: Police are surrounding a home with a subject inside, armed with a rifle.

There are also reports of an officer down.

NORTH SACRAMENTO (CBS13) — The Sacramento Sheriff's Department said they are assisting Sacramento Police with an officer-involved shooting in the 200 block of Redwood Avenue.

Sacramento Police said a subject armed with a gun and firing in the area.

Police are asking residents to avoid the area at this time.

This is is a developing story. Check back for details.