5:30 p.m. UPDATE: The California Department of Corrections and Rehabilitation has identified the stabbing victim in Wednesday's  riot as Hugo Pinell, 71. 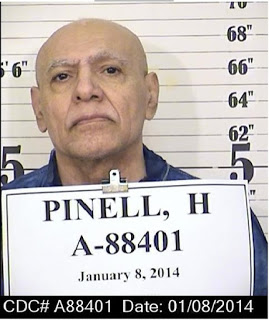 Pinell first was sentenced to life with parole for rape with force in 1965. Six years later, he killed a correctional officer, earning him another life sentence.

He was also one of the San Quentin Six a group involved in a 1971 San Quentin Prison escape attempt that left six people dead. He was convicted of assualting two correction officers, earning him another life sentence. Guards said at the time that Pinell lured one of the guards killed in the escape by telling him he had a letter that needed mailed.

Pinell was last up for parole in 2009, but he was denied for a ninth time. In his previous attempts, the next wait would only be one to five years, but California voters passed Proposition 9, known as Marsy's Law in 2008, which allowed the parole board to set his date for 2024.

"He was definitely the target," California Department of Corrections and Rehabilitation spokeswoman Dana Simas said. She would not give more information about the alleged attacker for his own protection.

REPRESA (CBS13/AP) – Authorities say there has been a deadly riot at California State Prison, Sacramento.

The fight involving about 70 maximum-security inmates began when one inmate attacked another, "and then everyone else joined in," said Department of Corrections and Rehabilitation spokeswoman Dana Simas. The riot at California State Prison, Sacramento, involved members of multiple prison gangs, she said.

One inmate was killed in the riot, while numerous others have been injured. The identity of the victim is being withheld until relatives are notified.

The fight broke out in the general population yard. Guards used pepper spray and fired three warning shots with a rifle to bring prisoners under control. Guards say they were able to get a handle on the situation and round up weapons found in 20 minutes.

Prisoners remained locked in their cells as officers investigate the disturbance.

The last major riot at Folsom Prison happened in September 2012. A total of 13 inmates were injured, including one shot by a corrections officer. Dozens of inmates were involved in the riot.

CSP-Sacramento -- or New Folsom Prison, as it's commonly known -- houses 2,080 inmates, according to the California Department of Corrections and Rehabilitation website.