SACRAMENTO (CBS13) — Research has shown foster children do better in a home with relatives than strangers.  But relative foster parents are often given a fraction of the funding to raise those kids, than a stranger foster care parent would receive.

A group of child advocates are taking their fight to the capitol, trying to change California's policy.

When little Isabella was born in September, Donita Sears got a call from a social worker, asking her to foster her newborn niece.

"'Make sure that when I show up your house is clean and that you have everything prepared to take care of this baby.'  And I said, 'Whoa, wait! I need at least a couple more hours than that because I have to go shopping!'" recalls Sears.

Already a single mom of four, Sears knew it would be a challenge.  Making things even more difficult is the state provides less funding for Isabella's care than a non-relative foster parent would receive.

"The fact that somebody who chooses to do this is paid more than somebody who's asked to do it, it's hard for me to understand," said Sears.

As a relative foster parent, Sears receives $343 a month in CalWORKs benefits to care for Isabella.  But if Isabella were with a non-relative foster family, they'd get at least $657 a month from the foster care system. 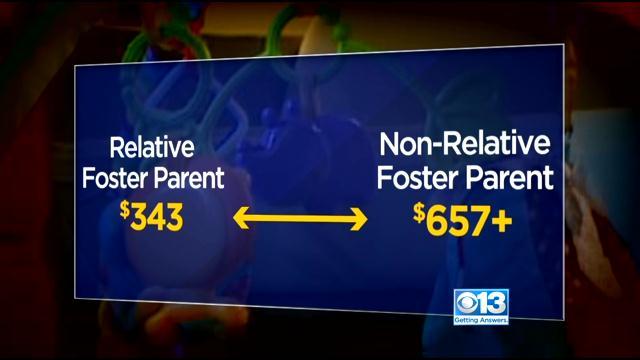 That gap gets wider as the child gets older, has a disability or medical needs or there are multiple children being fostered.

"It feels to me like there's a little bit of a hidden agenda which says let's go ahead and place these kids with kin because maybe we're not going to have to pay so much," said Sears.

"There certainly is enough money to solve this problem," said Reed Connell, who is with an advocacy group called the Alliance for Children's Rights.

He says the problem starts with the federal government, which only allocates foster care benefits if the family that child came from falls below the poverty line in 1996.  About a third of California's foster kids are not eligible for that federal funding, leaving it up to the state to help caregivers.  California is the only state that hasn't given equal pay to relative foster parents.

Connell says California's funding gap is not deliberate, it's just grown over the years.  The Alliance for Children's Rights is asking lawmakers to get relative foster parents equal payments through the foster care system with a budget measure.

"California has the option to do what every other state has done and chip in the state general fund dollars, especially now, in a time of surplus in the budget," said Connell.

Republican Assemblymember Brian Nestande doesn't think many people would oppose equal funding for relative and non-relative foster parents.  But he says it is a bureaucracy battle.

"A lot of times you're bumping up against the institution of the budget, which has so many competing interests. And to change one, you know you pull a string on another one," said Asm. Nestande.

The budget gap is about $30 million.  Advocates believe if California taxpayers were just aware, they'd want to close the gap.

"I will advocate as a member of the budget committee to do this because once again, as a state we're responsible for these children," said Asm. Nestande.

Decisions made at the Capitol that could make a big difference in homes like Sears'.

"Isabella's expenses don't change because she's with me, not with the foster family," said Sears.

Another assemblymember, Ken Cooley, is pushing a bill that would help relative foster parents apply for calWORKs benefits and give them more money for transportation, special needs and clothing.  It wouldn't completely close the funding gap, but it's a start.