PLACERVILLE (CBS13) — A Placerville Toys for Tots event took a dark turn this past weekend after the Proud Boys posed with Santa while holding up a gesture widely recognized as a symbol of hate.

"We were asked to take a picture. The police cruiser happened to be in the background," said Patrick, the Placerville Proud Boys president who was not comfortable giving his last name.

Patrick says the group donated $5,000 worth of gifts for a Toys for Tots fundraiser this past weekend.

"We decided that we were going to donate toys to the children here," he said.

But before they left, the group posed with Santa Claus while holding up a hand gesture widely recognized as a symbol of hate.

"Why would you display a hand signal that has been affiliated with such a stance which is white power?" Placerville Mayor Michael Saragosa said.

Mayor Saragosa says the group is not welcome in town.

In response to Mayor Saragosa, Patrick said, "Good luck with that. Most of the community supports us one way or another." 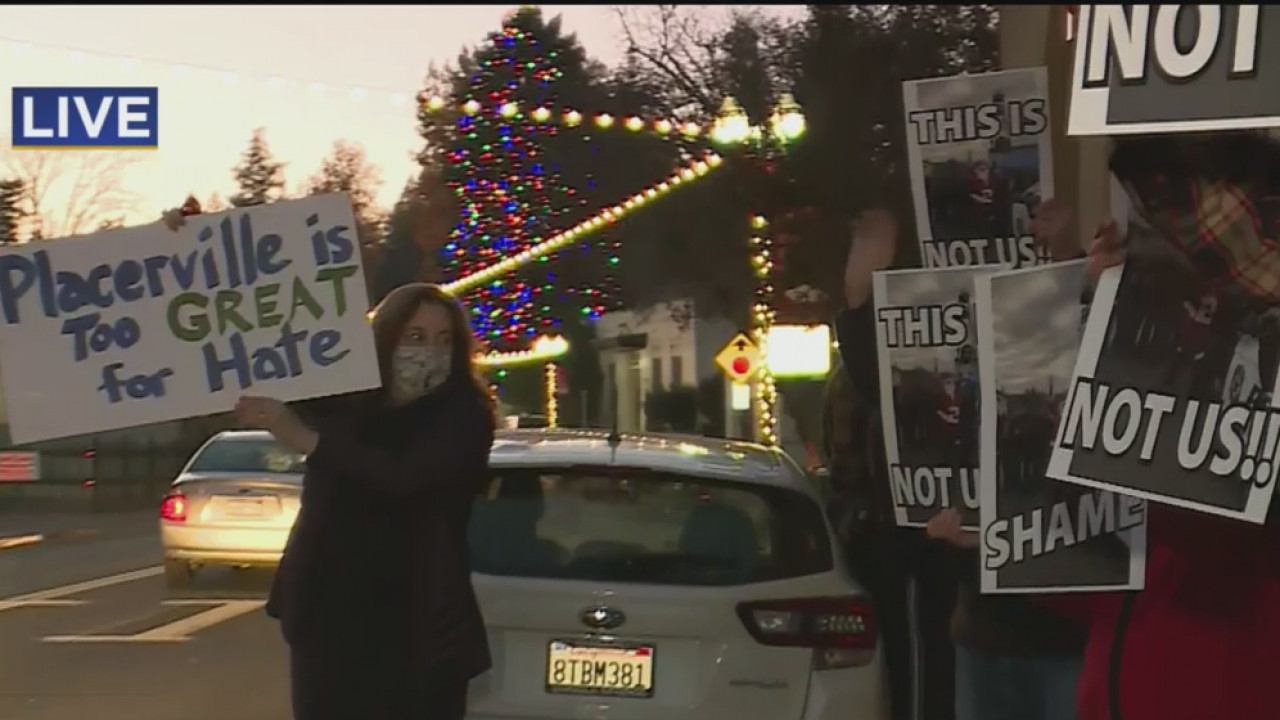 Outside of the town hall on Tuesday, dozens of protesters demanded the city put an end to the Placerville Proud Boys chapter.

"We're here to make sure the city council makes a resolution saying we will not tolerate this," Ruth Michaelson, who owns an art gallery in Placerville, said.

Protesters held up signs Tuesday that read "This is not us" and "Placerville is too great for hate." They said the example set at the Toys for Tots event by the Placerville Proud Boys is not the sentiment echoed by neighbors in town.

"I totally understand the whole event of dropping the toys off. But when you're all kind of group together, no one's wearing a face mask and the sweatshirts are the black and yellow sweatshirts with a big tree and a person hanging off of it, it just kind of like it just kind of sways the situation," Placerville resident Elizabeth Dubose said.

Placerville Police Chief Joseph Wren said in a statement that his department was accused of partnering with the group, which is false. He said officers help with traffic control for the event organized by the Marines every year and that "it's unfortunate some choose to use the Toys for Tots event to push a personal or political agenda."

In a phone interview Tuesday, police said they don't consider Proud Boys a white supremacist group, despite the mayor's own condemnation.

"I'm happy to talk to them. I'm a person of color myself, I'm Latino, and I want to make sure Placerville is open to all races," Saragosa said.

CBS13 did reach back out to the mayor and city council to ask if there was any discussion about officially banning the group or publicly condemning their activity in Placerville. We have not heard back.