SACRAMENTO (CBS13) – An industry in California is suffering major losses in the labor market.

For years, the pool of qualified workers has been small for the construction industry. Another problem? Take a look around the metro and there are multiple development projects in the works.

Past a vacant lot, weeds and wired fencing in north Sacramento, Kevin Dobson sees an opportunity.

"It's a place where students can be tinkers, builders – hands-on learning," he said.

The north Sacramento site will be the future of Capital College and Career Academy. Dobson, the founder and executive director, touts it's a concept never seen in Sacramento until now. The soon-to-be charter school wants to expose students to higher education, but if college isn't an interest, you can explore jobs within the construction trade.

"It's one of the highest growing sectors in Sacramento, projected to be so for the next five to 10 years," Dobson said.

But the workers are few. 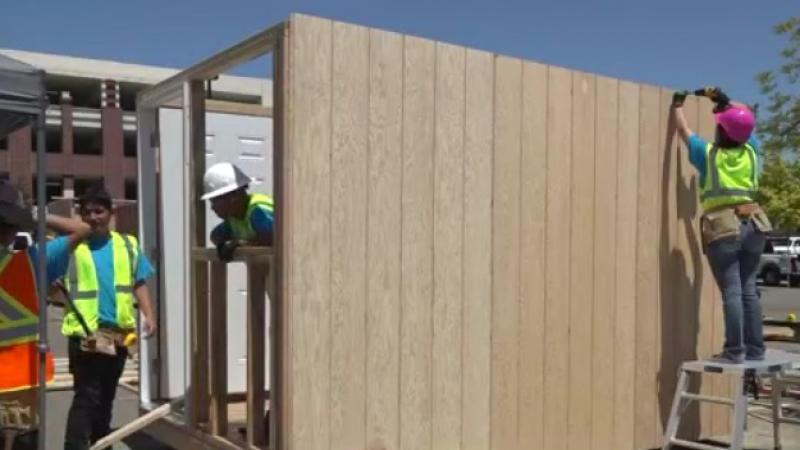 "There are careers from individuals swinging a hammer, working with heavy equipment, to being in it," said Karen Conrod of Herrero Builders.

At a recent design-build competition for high school student, even the unlikeliest of students are willing to take a woodshop class.

Damaris Ruiz, a Woodland High School student, never thought she would be using a drill gun.

"Uh-oh. I'm like the pickiest girl. Ewww, no," Ruiz said when asked if she had ever considered a woodshop class.

While the senior student now likes working with her hands, she's going to college for biology instead of the trade.

But that's the point – she's been exposed and saw options.

Rose Braxton wants her daughter, Trinity, to have that same opportunity who is in special education.

Trinity is only nine years old, but already her mother is thinking about how she's going to get her through high school and beyond.

It's why Braxton wants to enroll Trinity in Capital College and Career Academy.

The hands-on learning, intimate classrooms and paid internship opportunities planned for the school are appealing.

Dobson's vision started as an educator years ago.

"[I] just said, 'Man, there's got to be a better way to do this,' [because] so many kids are being left behind," Dobson said.

He saw talented students graduate from high school with no plans for later.

Now, he hopes this school will lay a foundation for the lives of future students.

Enrollment is open at Capital College and Career Academy for the 2023-2024 academic year.