Darius Rucker is the Bo Jackson of music.

Much like how Jackson was able to excel at multiple sports (a feat not even Michael Jordan could accomplish), Darius Rucker has seen enormous success in more than one genre of music, hitting the top of the charts in the '90s fronting Hootie & the Blowfish and again as a country singer.

Still basking in the glow of being only the third African-American artist to win the GRAMMY for Best Country Solo performance (joining Charley Pride and The Pointer Sisters) for his version of Bob Dylan and Old Crow Medicine Show's "Wagon Wheel," Rucker recently took time out of his busy touring schedule to chat up Radio.com about his lifelong love of sports, specifically football.

"There are two kinds of seasons for me: football season and waiting for football season," the Charleston, South Carolina native chuckled during the exclusive interview. "My favorite teams are the [South Carolina] Gamecocks and the Miami Dolphins. I love it.”

One of Rucker's favorite sports-related memories was in 1995 when Hootie & the Blowfish was tapped to perform the National Anthem during a Monday Night Football game at his beloved Dolphins' Sun Life Stadium.

"[Dolphins quarterback] Dan Marino took the jersey off of his back and had it framed for me," the singer said of that fateful evening. "It has dirt on it and everything. He sent over a game ball and a great letter. That’s my most prized item in my sports memorabilia collection.”

Rucker's love for the Dolphins is well documented, going as far back as Hootie & the Blowfish's 1995 hit "Only Wanna Be with You," which features the line, "the Dolphins make me cry." The Sports Center-themed music video even features a cameo from Marino – who Rucker calls his favorite athlete of all time – tossing passes his way.

When it comes to getting out and playing a sport, however, Rucker is all about golf, and can regularly be found taking swings on the links with his son and youngest daughter. He's also good friends with golf superstar Tiger Woods, who he likes to root for at pro tournaments. 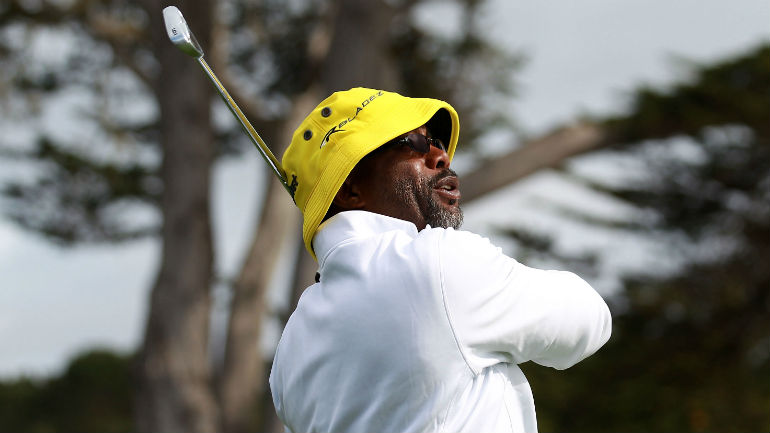 Darius Rucker watches his tee shot on the 17th hole during the second round of the AT&T Pebble Beach National Pro-Am. (Jed Jacobsohn/Getty Images)

“I play a lot, even on the road," the singer said, admitting one of his new year's resolutions was to improve his golf game. "The other day I shot a 74, and the next day I shot an 84. It fluctuates like that, but it’s still my favorite thing to do. Once the spring hits, we play every day. Once you get over partying and sleeping in, it’s the best way to spend the mornings. I’m up at 8 o’clock every day now – what else am I going to do?”

When asked who he'd draft for a fantasy version of Hootie & the Blowfish where he could recruit only professional athletes, Rucker assembled a squad that would likely generate respectable ticket sales on tour, even if they couldn't play a lick.

Related: Q&A: Darius Rucker Says His Success In Country Is About 'The Music' And Being 'Kind Of A Nice Guy'

“I’d have Dan Marino playing bass. I’d have [retired Cincinnati Reds baseball player] Barry Larkin playing drums, and [former professional wrestler] Ric Flair on keyboards for sure, shaking that hair," he laughed. "My guitar player would probably be [retired Miami Dolphin] Jason Taylor. If we were all single and on the road, I’d like to get some of his throwaways. He’s so pretty. They could all sing backgrounds, but I’d still be the lead singer.”

Citing Notorious B.I.G.'s "Big Poppa" as the song he'd choose as his walk-up music if he was a pro baseball player, Rucker's No. 1 moment as a sports fan leads right back to his beloved Miami Dolphins.

“That would have to be when I was six years old and the Dolphins won their first Super Bowl after going undefeated," he recalled of the Dolphins' legendary 1972 season. "I’ll never forget how happy I was at that moment!”

Fans will have ample opportunity to have a moment with Rucker, as the singer and his band are on an extended tour from now through the summer. In between headlining dates, he'll appear at a slew of music festivals, including the Faster Horses fest in Brooklyn, MI (July 18-20) and Canada's Big Valley Jamboree (July 31-Aug. 3) in Camrose, Alberta.