SACRAMENTO (CBS13) — CBS13 has confirmed a dog that was lost by Air Canada was euthanized after he was hit by a car.

Air Canada workers had let Larry the Italian greyhound out of his crate after a flight delay. Larry escaped and sparked a search throughout the Bay Area for the missing dog.

A Bay Area veterinarian confirmed that Larry suffered a punctured lung and broken pelvis, likely after being hit by a car.

The search gained international attention after accidental sending a message critical of a story on the search to CBS13's Maria Medina:

"I think I would just ignore, it is local news doing a story on a lost dog. Their entire government is shut down and about to default and this is how the US media spends its time." 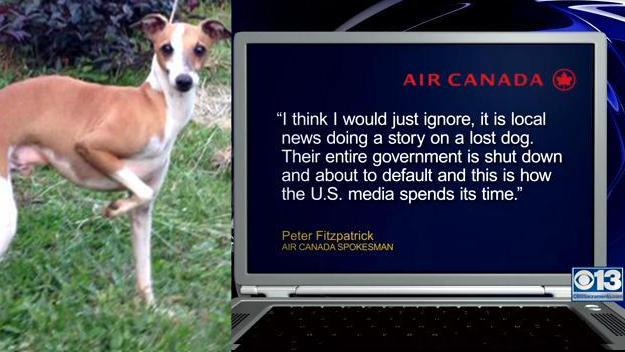