SACRAMENTO (CBS13) — Updates from the protests in Downtown Sacramento:

It appears crowds were less destructive Friday night, but CBS13 crews witnessed several instances of graffiti and some damage to buildings. Some windows at the Sacramento Music Circus were broken.

At one point, a man started swinging a sword at some members of the crowd. It's unclear who the man was affiliated with. No one was hurt in the incident. Police quickly subdued the man and he was taken away in an ambulance.

Police say one subject was detained after officers received reports that he had a firearm. Officers found the subject had a BB gun. That person was not identified by police.

There were also reports from police that demonstrators threw rocks at motor officers and some pointed lasers at the police air units.

The group made their way back to Cesar Chavez Plaza and began dispersing just before 11 p.m.

Sacramento police say demonstrators have thrown rocks at motor officers and some continue to shine lasers at the police air units.

The crowd has moved toward the District Attorney's office, which was damaged during Thursday's protest.

Down the street from the Memorial Auditorium, a man began swinging and pointing a sword at several people who were marching with the crowd.

The group around the man with the sword quickly backed up off the sidewalk and appeared to be talking with him. He then backed up against a building while still pointing the sword at people.

Police were quickly able to get to the situation under control. The group moved on and officers were seen talking with the man. 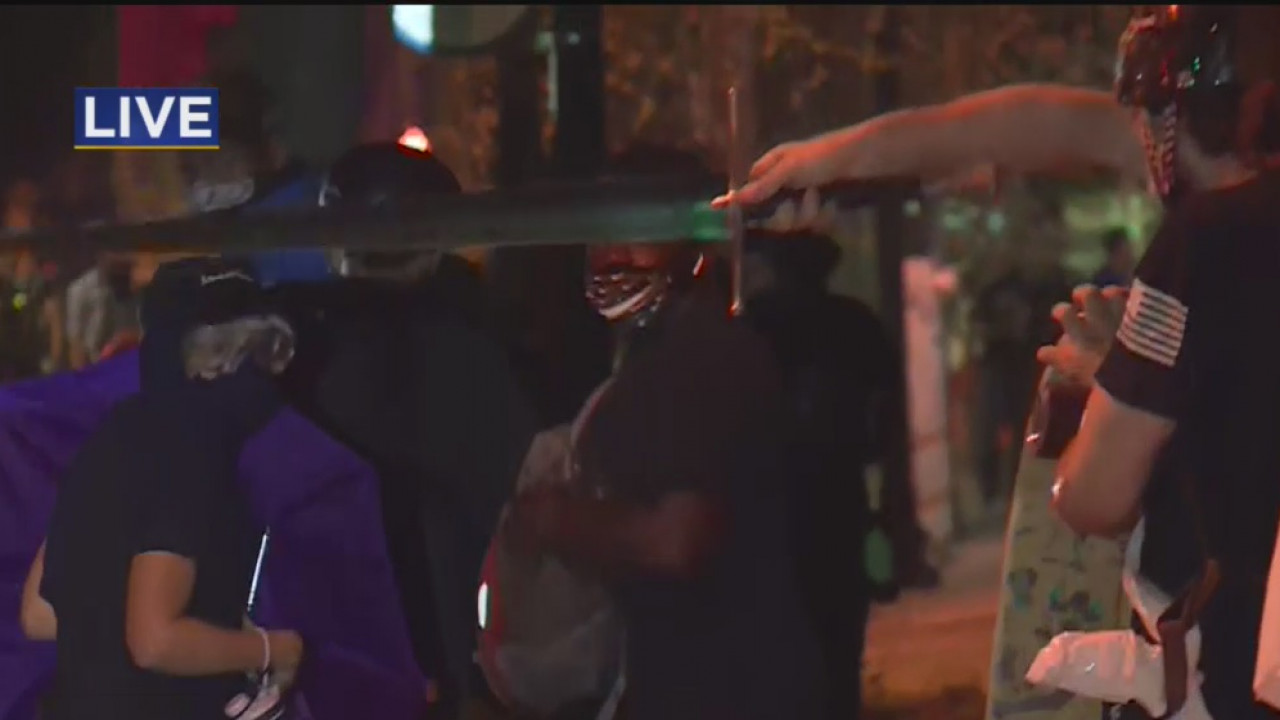 It appears no one was injured in the incident. And the man was taken away in an ambulance.

About an hour into the march, there have not been any reports of major damage. As the crowd moves through Downtown Sacramento, some people have spray-painted graffiti on private and government-owned buildings.

So far, this demonstration appears to be more calm compared to Thursday night. Law enforcement is staying back and blocking off streets as the crowd marches.

Crowds are now moving up 12th St. away from the Capitol.

CBS13 crews say that a Starbucks at 12th and L Street tagged with black spray paint.

Law enforcement has shut down the off-ramps along northbound and southbound Interstate 5 at J Street.

Sacramento police tweeted that some in the crowd are pointing green lasers at officers.

The crowds have made it to the Capitol, where there is a strong law enforcement presence. The group is marching east down L Street.

A small fight broke out within the crowd but was quickly broken up. 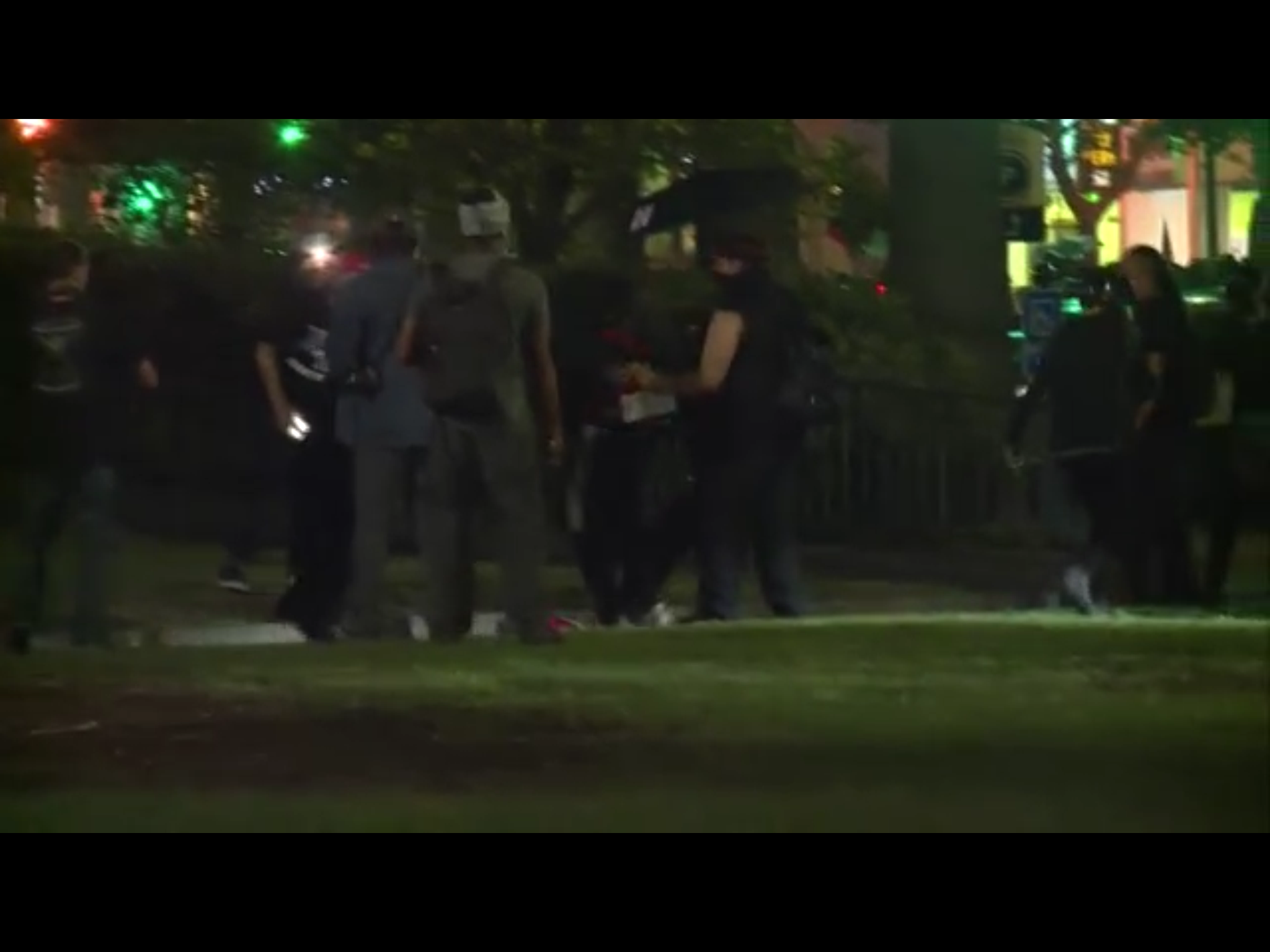 Some demonstrators targeted a federal building off Capitol Ave. CBS13 crews heard banging but could not see any damage. The building was also spray painted.

The Sacramento Police Department said it has dedicated a third of its force to the Downtown area Friday night. They are also getting help from the Sacramento County Sheriff's Office. Officials say their strategy is to de-escalate and not put officers in danger.

The crowds marched down Fifth St. and are making their way toward the state Capitol down Capitol Mall.

CBS13 crews have witnessed one instance of vandalism so far, where someone spray-painted "we stop when you stop."

Around 150 people have gathered at Cesar Chavez Plaza for a second night of protesting in Downtown Sacramento.

The crowd started marching around 9 p.m., moving down J Street near DOCO then stopping near the Scientology building. Demonstrators are chanting "Black Lives Matter."

Sacramento police say many of the subjects have helmets, shields, armor and weapons. There is a heavy law enforcement presence Downtown.

After a destructive night of protests in Downtown Sacramento, officials braced for another night of demonstrations Friday.

Mayor Darrell Steinberg said more protests are possible Friday night. He did not have many details but said local police are increasing their presence Downtown.

Steinberg said he is supportive of how police handled the violent situation Thursday night, saying officers were focused on de-escalation and reducing the possibility of even greater damage.

In contrast, Sheriff Scott Jones had a strong message Friday about cracking down on the violence and making quick arrests. But Steinberg said there were no arrests because it would not have been safe for officers to do so.

"It is appropriate and necessary to arrest people who are engaged In illegal behavior on the spot if it can be done in a way that is safe for the officers, safe for the public, and does not increase the risk of even greater damage," Steinberg said.

Jones also said he would be bringing in the National Guard, however, most of the protests have been happening in the city's jurisdiction, not the county's. Steinberg said calling in the guard is premature and, at this point, he does not think it's needed.

Two separate protests were held Thursday evening. The first, organized by Justice Unites Individuals and Communities Everywhere (JUICE), started in Cesar Chavez Plaza around 5:30 p.m. and ended by 7:30 p.m. Peaceful protesters gathered to speak and marched to the state Capitol and back.

Swipe through pictures from Thursday night's protest below:

On Friday, local authorities vowed to stop and prosecute the people behind the unrest.

Sacramento County District Attorney Anne Marie Schubert had harsh words for group who appeared to be behind the destruction.

"The Sacramento District Attorney's Office was targeted last night by a domestic terrorist and anarchist organization- Sacramento Antifa. This attack was planned," Schubert wrote in a statement on Friday.