SACRAMENTO (CBS13) - A dog is safe after it became stuck in a drainage pipe in Sacramento. 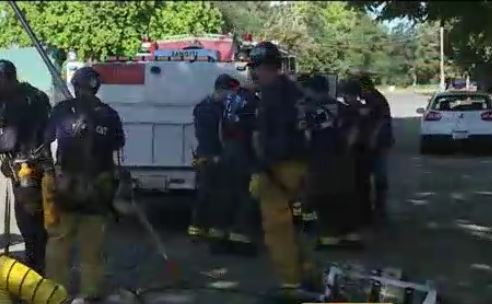 The incident happened in the 100 block of Commerce Circle. The dog, a 10-year-old blind husky, was hoisted out by a technical rescue group using a tripod system around 8:30 a.m.  Friday.

Animal control officers were alerted to the trapped dog after someone reported hearing a whimpering sound coming from the pipe.

The dog had been missing for two days, according to its owner, who had been frantically looking for the dog. But the odds for Kona were in her favor. Her owner, Brian Kirkegaard, held back tears as rescue crews pulled the husky out of from a sewer.

Kona is apparently an escape artist and managed to get through a small fence two days ago.

"There's only so many areas she could go...one way was impossible, the other way was through these pipes. So, for the past few nights and days my friend and I have been crawling up these pipes trying to find her," Kirkegaard said.

By chance on Friday morning, a neighbor along the street heard whimpering coming from below a manhole cover and called firefighters.

It was too tight for a ladder, so one firefighter had to be lowered on a rope into the drain and feel around in the dark for Kona.

"Once we got down there, it was a matter of keeping the dog calm and getting the dog into a harness and bringing the dog back up," the firefighter said.

Once she was above ground, Kona was on her way to be checked out by a vet. Her owner said he's going to be keeping a very close eye on her in the future.

"There have been close calls when she was younger, more youthful, she's run and run, but now that she's older age, she doesn't get out as much she just calmly runs around, but the fact that she still has the ability to fight for her life is impressive," Kirkegaard said.