RANCHO CORDOVA (CBS13) — A Rancho Cordova community is itching for answers after several neighbors reported getting rashes and what appears to be a bizarre allergic reaction.

Many of the incidents happened last weekend at a time when several fires broke out nearby. That made many people wonder if the smoke in the air caused the complaints on the skin.

"My skin was getting tight and swollen and I was constantly itching my neck," said Jenni Matamoros.

She took to Facebook with a photo showing the shocking skin rash she got over the weekend just hours after returning home from a BBQ. She was at home watching a movie with her husband with the windows open when she started to feel uncomfortable. 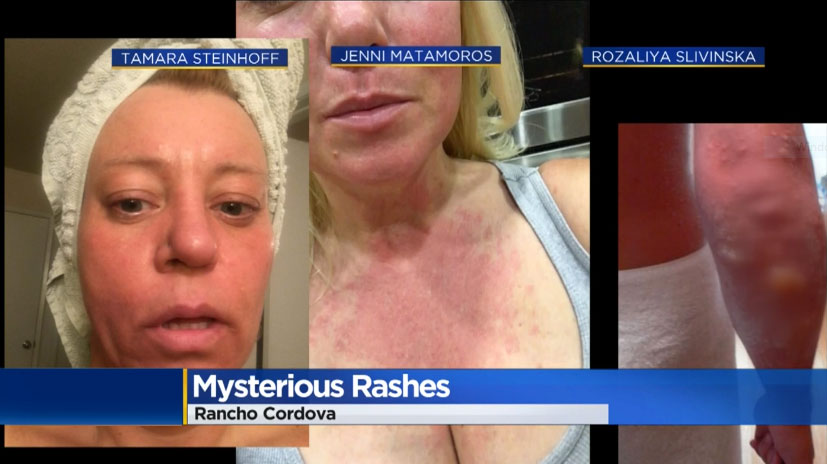 "I just kept itching my chest and I felt really hot. Nothing had been different, so I started asking could it be something in the air with the fires or this weird smell in the area, that's when I did the post. I said it can't be something I ate because I hadn't eaten in hours. So I wondered if anyone else in the area was feeling the same thing? or having these same reactions, and that's when I was completely overwhelmed," she said.

ALSO: Video: $400K Lamborghini Destroyed By Fire After Being Sprayed With Gas

Overwhelmed by the dozens of comments she got including several people who live near her Rancho Cordova neighborhood of Stonecreek who shared photos with similar reactions.

"I was burning itching scratching, blisters all over my face, my neck," said Tamara Steinhoff.

Steinhoff said she went for a walk Friday and when she came back to work-- she noticed something terribly wrong.

"All of a sudden I started burning, feeling like I was itching, my throat was starting to close, felt like I couldn't breathe," said Steinhoff.

With grass fires popping up in that area over the last few weeks many wondered if poison oak could be a cause.

"Poison oak can travel through the air, the allergins are so strong that they can create an allergic response, but everyone has a different sensitivity," said Dermatologist Dr. Emmanuel Maverakis. Dr. Maverakis says poison oak reactions typically happen 24-48 hours after exposure.

"Poison oak is highly immunogenic so someone with a very mild amount of exposure can get an eruption.

The farther you are from the fire, the exposure will be much less" he said.

Maverakis adds, "I don't think it's going to cause a widespread eruption with many patients but absolutely if someone is close to the fire if someone is in contact with poison oak it's absolutely a possibility."

But firefighting crews have not been affected, said Metro Fire Cpt. Chris Vestal.

"None of our firefighters are experiencing the symptoms that these neighbors have felt," he said.

Yet Steinhoff's doctor gave her medication.

"He gave me medication, and in parenthesis, it says 'reaction to poison oak,'" she said.

Now a mysterious rash of rashes is making many question what's in the air.

"I thought I was the only one, and I was kind of glad to see there were other people so we can see what it was, so it's not just a fluke," said Steinhoff.

While the exact cause of these rashes is still not determined, Dr. Maverakis says sun exposure could also be a factor. He says the best defense if you notice any skin irritation is to wash it off quickly, apply a cold compress, avoid additional sun exposure, and speak to a dermatologist.